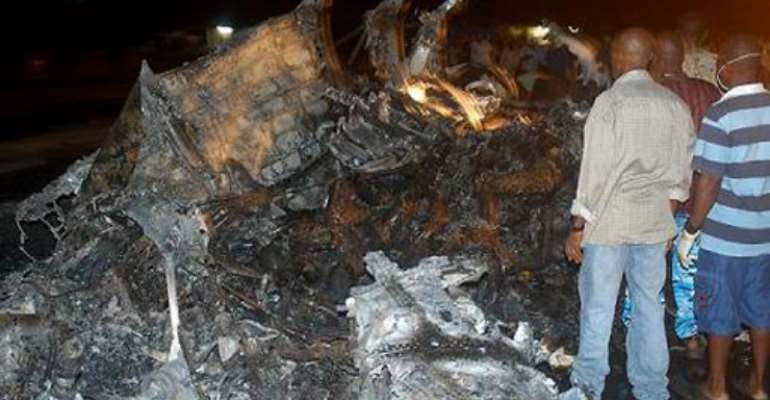 People gather around the remains of a helicopter crashed at Sierra Leone's Lungi International Airport in 2007. By (AFP/File)

"We have accepted liability and engaged Paramount Airlines as there was a valid insurance document covering all on board the aircraft," Transport and Aviation Minister Vandi Chidi Minah told journalists after a visit to Lome.

"The issue has taken too long and we don't want the issue to affect the excellent relations existing with the government and the people of Togo."

He did not say how much the families would receive.

The victims, including Togo's then-sports minister Richard Attipoe, were mainly supporters of the national team, "Les Eperviers", who had just beaten Sierra Leone 1-0 in an Africa Cup of Nations match.

The Russian-made Mi-8 helicopter was shuttling the fans to the airport -- which is situated across a wide estuary, four hours by road from the capital -- when it crashed and burst into flames, killing all 22 people on board.

Togolese football has been hit by several tragedies in the recent past.

Following the 2007 plane crash, in 2010 two members of the national team were killed when the team bus was attacked by Angolan separatists as it travelled to the Africa Cup of Nations.

The country's chief voodoo priest in March called for traditional ceremonies to be held to "chase away evil spirits" that were afflicting the national game.