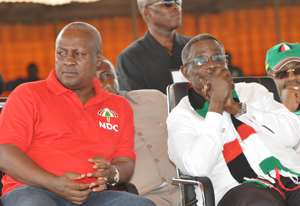 Yao Fiagbeto the President of The Concerned Citizens Democratic Alliance of Ghana (CCDAG) noted recently during his Easter tour in Ave-Avenor and Anlo constituencies that an independent nation like Ghana must have leaders with policies and road map that create jobs and wealth.

According to his findings the people of both constituencies felt their MPs and DCE/ MCE have given them a blank check. Because at the end of this political term no single industry was created to absorb their local resources, their graduates' students according to the people are leaving the constituencies in search of jobs and greener pastures elsewhere.

Therefore the people are determined that, this election will no longer be a rubber stamp for party gurus to impose Adjaho and Humado respectively on them rather they will elect candidates who can publicly define the responsibility of the office they seek and how they intend address their present economic, and unemployment concerns as a positive change to them (voter) and to their communities.

According to him, the people expressed frustration with NDC leadership imposing Adjaho and Humado on them again this 2012 election.

Yao Fiagbeto spoke to some of the youth and elders at these festivals where he spoke candidly that current policies and the road map of our new democratic dispensation which focus on borrowing and begging developed nations for handouts, loans, donations, to build Ghana's infrastructure projects is wrong and it is an unforgiving and an abominable act of government which must be derailed.

For example, our political leaders he said are repeating failed policies of borrowing money to build roads, energy, schools, and the worse of all to buy food. These acts are evidence of our government mortgaging the future of our unborn generation and our independence.

For the past fifty years the same failed policies of “borrow borrow” to build infrastructure left our current generation with no real income or sustainable revenues from gold, diamond, bauxite, timber, and cocoa.

Throughout history he went on to say NO INDEPENDENT NATION borrows money to undertake the above mentioned policies and road map. It is ungodly, a taboo, an irresponsible and shameful act of ineffective dump government.

He went further to explain that no responsible Head of State, President , MPs father or family head go around his neighborhood begging his colleagues for food or loans to support their citizens or family lifestyle. If such action continuous the father or the nation or any individual for that matter only loses his or her self respect among peers and member independent nations.

For these acts Ghana has reduced her status to dependent nation and a parasite on other peoples or nations hard earned sweat.

Ghanaians must oppose debunk policies and road map in this 2012 election. We need a government with a unique and better idea of governing our nation and providing lasting and meaningful solutions to Ghana's growth.

We must be critical about who we elect to represent us in this election. These leaders we have representing us today in Ghana which we called “wanton ntsi ni elites” leaders with nothing to offer but rendering Ghana to be extremely boring and stagnant according to President Rawlings.

An independent nation like Britain, China, USA, Canada, Germany, France, and Cote D'ivore our sister nation under President Houphouet Boigny just to mentioned a few do not beg each other for food or borrow money to support the lifestyle of their citizens.

No responsible father or head of household does indulge in such practices rather they borrow money with competitive rates and terms against their own capital reserves to build businesses and community industries.

These industries if created give birth to other viable necessary economic activities that support and sustain the existing businesses and industries.

The failed policies of the past rendered our beloved country Ghana penniless from production of gold, diamond, bauxite, timber and cocoa.

The government of Ghana should NOT give Ghanaians a BLANK CHEQUE in 2012 on the economy rather they should explain the true financial standing of our local and international cash/gold reserves.

We heard Libya has close to twenty-one billion gold reserves in British and Canadian volts (Central Banks). President Hugo Chavez of Venezuela announced similar amount in Britain which he now wants to be transferred to his home country.

Though we are not asking for such drastic measures but Ghanaians are entitle to know in layman's understanding not statistics, how much gold we have in our own reserves in Ghana and elsewhere. Revenues from all other resources must likewise be known to every citizen of Ghana in much media friendly way.

Farmers, fishermen, workers, teachers, market women, men and women in uniform must know how much their country is worth.

1. Therefore, CCDAG policy is to ask government about revenue intake from all our resources for each year against investment projects.

2. The Peoples Government/Voice or CCDAG does not condone or approve of Government parading the corridors of developed nations for handouts. Rather our policy must focus on our current local resources, invest heavily in small businesses dealing with and improving those resources.

4. We understood the NPP and NDC have already mortgaged sizable portion of our natural resources including our oil at a ridiculous price. We are sorry to say if all our investigation proves positive, then Ghana presumably will be viewed as a drug addicts who sold all his or her most treasured possession for a pop of crack.

5. But all will not be lost rather we will assist any government in power to re-shape and redirect the administration of District and Municipal Chief Executives. Assist government to bring visible result oriented meaningful revenue generated industries to our communities. Jobs and wealth will be created; students will remain and work in their communities upon graduation.

6. Political rivalry from the western playbook which allows personal issues, insults of opponents to score political points with the voters WILL NOT be associated with or tolerated. We will uphold the principles of brother and sister hood; encourage debate among opponents on serious issues on job and wealth creation for better Ghana Agenda and a new respectable equal partner of developed nations. A new Ghana with enormous food in reserves to assist other less privileged sister Africa nations.

7. All political opponents will be treated as step brothers and sisters fighting to win recognition with their mothers (parties/tribe) while at the same time protecting their fathers image and entire household (Ghana). CCDAG believes that Ghana is like a typical ancestral father with many wives and children. (Wives are the parties and the various tribes in Ghana whereas the children are the citizens' belongings to those political parties and tribes). We all want the best for our father's household and image. And most all we have GHANAIAN BLOOD flowing through all of us; therefore CCDAG will support any individual or party who treats their opponent with respect and civility.

8. All Members of Parliament (MPs) and District and Municipal Chief Executives according to our policy and conviction must be nominated by community and elected by the community at the community levels. Their Job description shall have specific marshal mandate on job and wealth creation. Their role with rulers of the land (Kings and Chief) shall have a unique and vital role in our Better Ghana Agenda. Finally, all ministerial appointment by Gods willing must focus heavily on hands-on experience, not only degrees.

9. We will support for example, the appointment of (1) Togbi Ignatius Agbo the 2011 National Best Farmer of the Year as Ghana's Agriculture Minister irrespective of his western scholarship background. (2) Togbi Bubunator Komitse Kaledzi the President and CEO of Ghana Star Oil as Minister for Energy and Industry. His impeccable background and years of experience, in meeting demand and supply for oil, gas, petrol for the Ghana roads and river transportation, fisheries, and to top it all job opportunities he has provided many Ghanaians, gives him the mandate to head such an august ministry.

10. For Ghana to change her image and be a nation to be taken seriously and be respected, our government or any government of Ghana must consider appointing people into positions with real time experience with an existing track record of economic impact on our economy.

11. Ghana Must be like USA, Britain, Germany, France etc and like China where all Africans will come and seek economic opportunity, remit money to their various countries and contribute to Ghana's greatness, realizing the dreams or our forefathers The big Six, Kwame Nkrumah and our contemporary charismatic President Rawlings (rebirth of the Ghanaian manhood) and of course President Kuffour who brought some sanctity into our currency (the value is the same). Long live Ghana, akpe namikata, na go de, mida moase, mida bo shi. Vivre au Ghana, j'ai vous remerci.