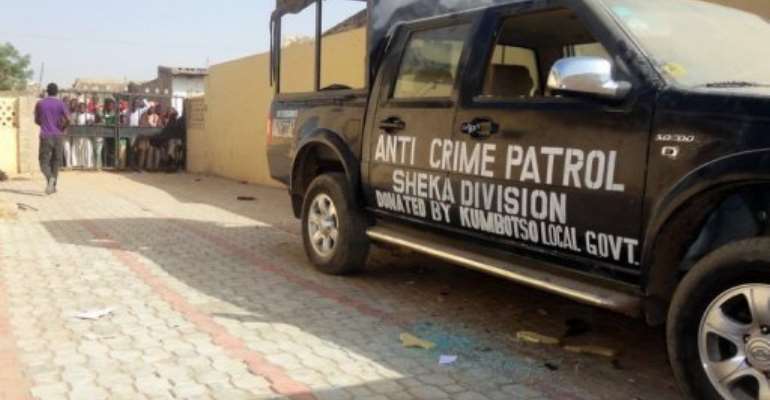 KANO, Nigeria (AFP) - Attackers armed with bombs and guns opened fire at outdoor church services at a Nigerian university on Sunday, killing around 20 people as worshippers tried to flee, witnesses and officials said.

A powerful explosion and gunfire rocked Bayero University in the northern city of Kano, with witnesses reporting that two church services were targeted as they were being held outdoors on the campus.

Officials were unable to confirm casualty figures, but an AFP correspondent counted six bullet-riddled bodies near one of the two sites.

At least another dozen bodies could be seen on a roadside by the university, but the exact number was unclear.

Musical instruments and half-eaten meals could be seen at the site of one of the services.

An army spokesman confirmed the attack but could not provide a casualty toll. Lieutenant Iweha Ikedichi told AFP that it appeared the attackers used bombs and gunfire in the assault.

Witnesses said the attackers arrived in a car and two motorcycles, opening fire and throwing homemade bombs, causing a stampede. They said worshippers were gunned down as they sought to flee.

"They first attacked the open-air service outside the faculty of medicine," one witness said. "They threw in explosives and fired shots, causing a stampede among worshippers. They now pursued them, shooting them with guns. ... They also attacked another service at the sporting complex."

There was no immediate claim of responsibility, although the attack was similar to others carried out by the Islamist group Boko Haram.

Boko Haram claimed January 20 attacks in Kano, the largest city in Nigeria's mainly Muslim north, when coordinated bombings and shootings left at least 185 dead in the extremists' deadliest attack yet.

On Thursday, bomb attacks at the offices of the ThisDay newspaper in the capital Abuja and the northern city of Kaduna left at least nine people dead.

The group has previously targeted churches, including on Christmas day when at least 44 people were killed in a bombing at a church outside Abuja.

A bombing on Easter Sunday in Kaduna near a church that killed at least 41 people was a stark reminder of the Christmas attacks, but Boko Haram is not known to have claimed it.

Boko Haram's increasingly bloody insurgency has claimed more than 1,000 lives since mid-2009. Police and soldiers have often been the victims of such attacks, although Christians have been targeted as well.

It also claimed responsibility for an August suicide attack at UN headquarters in Abuja which killed at least 25 people.

Nigeria, Africa's most populous nation and largest oil producer, is roughly divided between a mainly Muslim north and a predominantly Christian south.

Boko Haram initially claimed to be fighting for the creation of an Islamic state in Nigeria's north, but its demands and structure have become less clear in recent months.

It is believed to have a number of factions, including those with political motives as well as a hard-core Islamist wing. Criminal groups are also believed to have carried out violence under the guise of Boko Haram.

An attempt at indirect dialogue between the group and the government in March collapsed, with a mediator quitting over leaks to the media and a spokesman for the Islamists saying they could not trust the government.

President Goodluck Jonathan, during a visit Saturday to the newspaper offices in Abuja hit by Thursday's suicide attack, did not answer directly when asked whether dialogue was necessary to stop the violence.

"You may dialogue, you may not dialogue depending on the circumstances," Jonathan told reporters, adding: "But we will exploit every means possible to bring this to an end."