Kenyans on top in London Marathon 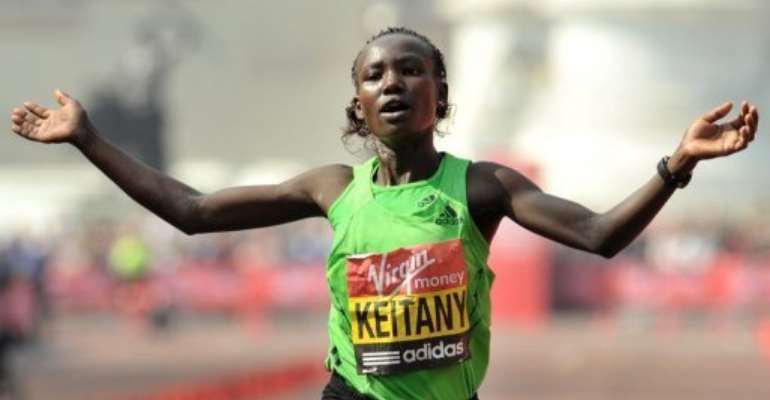 LONDON (AFP) - Kenya's Wilson Kipsang and Mary Keitany won the men's and women's events respectively in the London Marathon here on Sunday as the African nation dominated the podium places in the elite races.

Kipsang, the second fastest man of all time, went clear of a class field in the closing stages and won in an unofficial time of two hours, four minutes and 44 seconds -- just four seconds outside the course record set by compatriot Emmanuel Mutai in winning last year's race.

He finished more than two minutes in front of compatriot Martin Lel, who overtook fellow former London champion Tsegaye Kebede of Ethiopia with a strong sprint finish to serve notice of his credentials ahead of the Olympic Marathon in London in a few months' time.

Kebede may have prevented a Kenyan clean sweep in his race but in the women's event Mary Keitany successfully defended the title she won last year to lead home a Kenyan 1-2-3.

She left an outstanding field trailing to win in an unofficial time of 2:18:36, a new Kenyan national record and a personal best -- well inside her time of 2:19:19 in which she won last year's London Marathon.

World champion Edna Kiplagat finished second, more than a minute behind, with world silver medallist Priscah Jeptoo a further 24 seconds behind in third.

There was success for Britain in the wheelchair races with Dave Weir and Shelly Woods ensuring a home double.

Weir timed his finish to perfection to see off the challenge of Switzerland's Marcel Hug and so win his sixth London title while Woods overpowered her rivals to claim a second London victory of her career, finishing nearly four minutes ahead of Japan's Wakako Tsuchida.