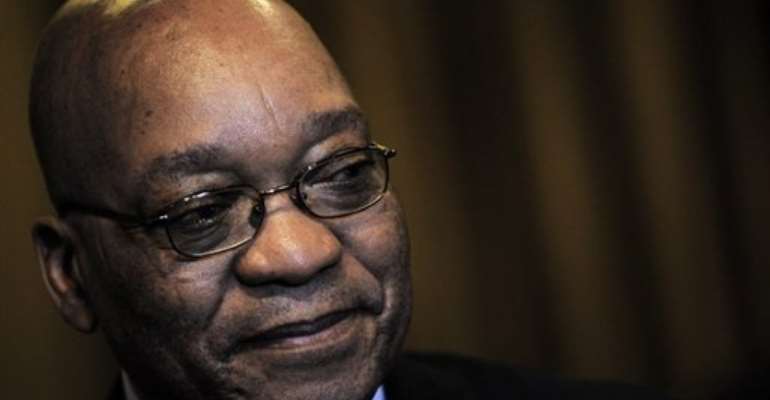 Zuma's nephew Khulubuse came under fire for pledging one million rand to the African National Congress. By Gianluigi Guercia (AFP/File)

JOHANNESBURG (AFP) - Authorities seized assets of a nephew of President Jacob Zuma to cover debts to a security company that guarded now-liquidated gold mines he co-owned with a grandson of Nelson Mandela, a newspaper reported on Sunday.

The 7-, 5-, and 3-series BMW vehicles and other household items will be auctioned on April 23 because Khulubuse Zuma failed to pay $1.25 million (955,000 euro) in debt as ordered by a court in January.

"It is not expected that the full judgment debt will be recovered from the proceeds of the sale," the company's lawyer Nic Vivers told the newspaper.

The pair's mining company, Aurora Empowerment Systems, is accused of running two gold mines into the ground and causing more than 5,300 workers to lose their jobs.

A high court judge ruled that Zuma, chairman of Aurora, had failed to honour a settlement agreement with Protea Coin Group under which he was supposed to pay the firm more than 12.1 million rand ($1.5 million, 1.2 million euros) after the mines went under.

The saga has stoked criticism of nepotism and dirty dealing in the ruling African National Congress (ANC).

Aurora was appointed to take over the mines after previous owner Pamodzi was liquidated in 2009.

Mineworkers' salaries went unpaid during the two years Aurora ran the mines. A trade union claimed one miner even killed himself by drinking rat poison because of his money troubles.

The mines' infrastructure was stripped and they were abandoned except for illegal miners, four of whom died in an apparent shoot-out with security guards last August.

Khulubuse Zuma claimed to have paid over salary money, but this never reached workers. Known for his playboy lifestyle, the businessman came under fire last year for pledging one million rand ($123,000, 97,000 euros) to the ANC.