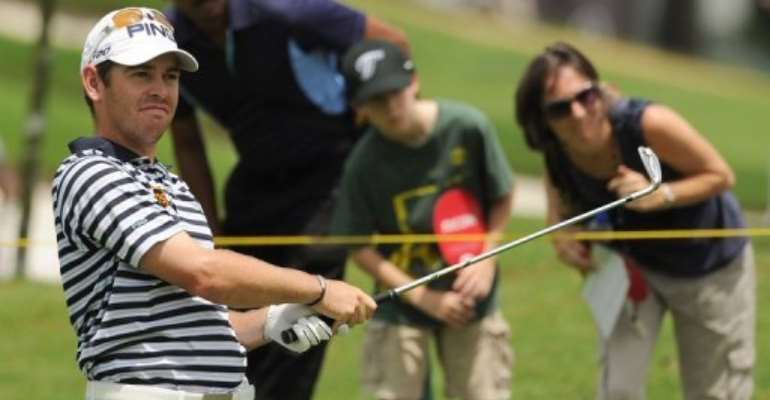 The $2.5 mln Maybank Malaysian Open is co-sanctioned by the Asian Tour and European Tour. By Khalid Redza (AFP/HO)

KUALA LUMPUR (AFP) - US Masters runner-up Louis Oosthuizen dodged thunderous rainstorms to hold a one-shot lead at the Maybank Malaysian Open on Saturday before play was washed out for a second day running.

Oosthuizen, who has shrugged off last week's play-off loss and fatigue from flying across the globe, plus Malaysia's unpredictable weather, was three-under through 10 holes of his third round for an aggregate score of 13 under par.

Germany's Martin Kaymer was six back through 12 holes of his third round and 2011 Masters winner Charl Schwartzel, the first-round leader, was also trailing by six after 14 holes.

"It's a tough week but it was always going to be the case this week," Oosthuizen said. "None of that will matter if I can win tomorrow.

"My swing feels really good and when you are playing like this you really want to get a win because it just boosts the confidence so much, and it's a good time of year to do that."

Oosthuizen had to return early to complete his second round on Saturday, emerging with a one-stroke lead, after a fierce storm deluged par-72 Kuala Lumpur Golf and Country Club a day earlier.

After another hour-long rain delay, the cool South African emerged to compile a truncated round of four birdies plus one bogey before the day's second shower forced a halt at about 5:40 pm (0940 GMT).

By that time, Oosthuizen had picked up birdies on the par-three fourth and par-five fifth before he dropped his only shot on the next hole.

And he had to scramble with a short up-and-down on the par-four seventh after overhitting his pitch shot through the green.

The Muslim call to prayer was competing with rumbling thunder, and Oosthuizen looked to the darkening heavens as he prepared to putt on the ninth green.

And his prayers were answered as he stroked home a 12-foot birdie to match Gallacher as joint leader, and then picked up another shot on the 10th before the hooter.

"You never know with the weather here, so you're trying to get ahead of the guys just in case all of a sudden it becomes a 54-hole event," Oosthuizen said afterwards.

"I actually don't think that will be the case now, but at that point on the sixth I was still thinking there was a chance this could be the last round."

Play will resume at 7:45 am Sunday (2345 GMT Saturday) with the fourth round scheduled to start at 8:30 am. However, officials said more rain was forecast for Sunday.