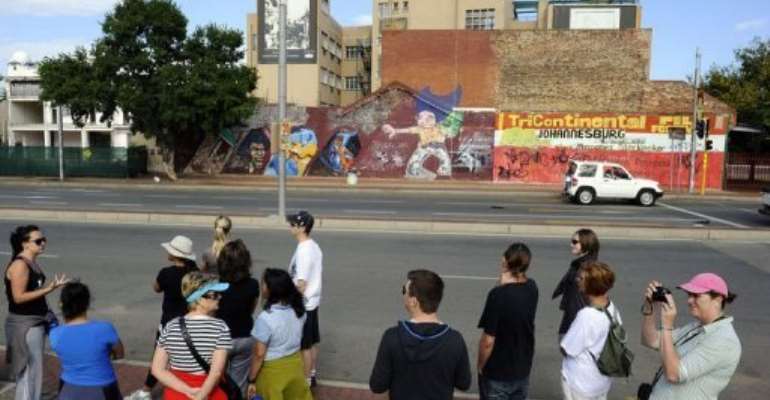 "I was born in Johannesburg, but I had never been to the city centre," said student James van Biljon on a guided Saturday stroll with his family.

Johannesburg's city centre was once the heart of apartheid South Africa. During the 1990s, the central banking district became a no-go area as crime soared and companies fled to safer neighbourhoods.

They left behind empty buildings, sometimes occupied by squatters, falling into ruin.

But massive public and private investment -- as well as an army of private security guards -- have reversed the trend over the past decade. Old office buildings have been transformed into lofts, facades have been restored, once dry fountains flow again and sculptures now dot the sidewalks.

While big tour companies avoid the Central Business District to shield their guests from crime, smaller operators are springing up and offering walking tours which are catching on with locals looking to rediscover their own city.

"We decided that on a Saturday we would do a tour in the CBD. We hardly advertised and we had 28 people," said Jo Buitendach, who studied archaeology but is now a full-time guide.

"Originally, (it was) mainly young people, from here. Young people of the suburbs have never seen their city, the city their parents talked about. But they have never been to it because they were told it's too dangerous."

Word of mouth piqued the interest of the older generation, and then foreign visitors. Companies have also started booking private tours.

"We have lived in Johannesburg for 22 years. We always drive through the centre, but we never had the chance to walk around," said Hester van Biljon, James's mother.

"And then I read an article on those tours in the newspaper, and I said 'let's do it!' We decided to bring the kids along."

Buitendach knows that her clients, especially from white suburbs, feel like intrepid pioneers.

"It's particularly difficult to sell a tour which is a walking tour, where people are actually walking. It is so unusual here," she said.

Most people who can afford a car drive everywhere, to avoid crime and the spotty public transport.

But the city's fearsome reputation is slowly changing.

"When you come to Johannesburg for the first time, you are told: 'don't go, it's too dangerous!' But we wanted to see more," said Gavin Turner, a tourist from London.

Many typical tour companies simply drive through the CBD as they ferry guests to the Apartheid Museum, said Gerald Garner, who also runs walking tours.

"Walking... is the only way to experience the city," he said. "A lot of my clients come and rediscover their own city."

Many are surprised to find pedestrian streets, sidewalk cafes, stunning renovated buildings and art deco facades. There are some potholes in the pavements, and the homeless are still there.

But there's also a strong African flavour in the city's street commerce, making it feel like one of the continent's vibrant cities.

"It is an incredible adventure for local people. It is as exciting as going overseas, since it is a totally other world at your doorstep," Garner said.

"Before starting my tours, I always ask if people have questions. At first, everybody was asking about security issues. And now it's less and less," he said.

The guides say they haven't had any problems, but they also steer clear of pockets where the city's regeneration hasn't yet taken hold.