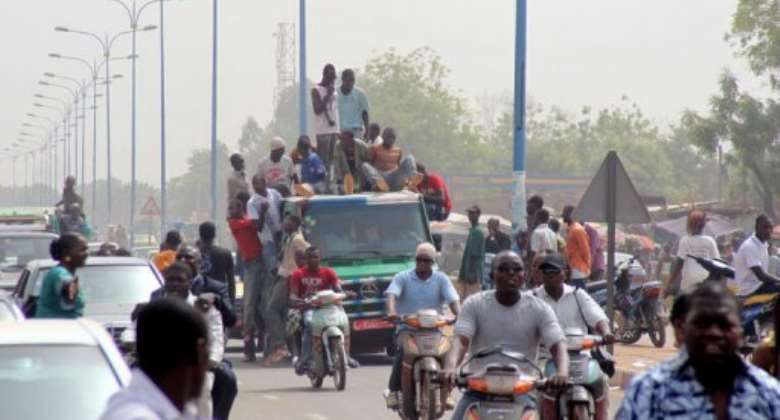 Bamako was tense after the coup. By Habib Kouyate (AFP)

BAMAKO (AFP) - Malian soldiers on Sunday repelled a fresh attack by Tuareg rebels in the north following a coup as the junta struggled to restore order after ousting the west African nation's president.

The Tuareg had said they were advancing on the key northern town of Kidal, but a military official in the town told AFP the rebels had been pushed back.

"Today we repelled an attack by Islamist rebels," a military official in Kidal told AFP on condition of anonymity, referring to one of two rebel movements fighting for independence of the traditional homeland of the desert nomads.

The desert tribes in January launched their first rebellion since 2009 in a decades-old demand for independence, boosted by the return of heavily-armed battle-hardened fighters from Libya who served late dictator Moamer Kadhafi.

Their forces overwhelmed the weak Malian army, and scores of soldiers are said to have been killed and captured, causing anger among troops over the way the conflict is being handled by the government.

Angry soldiers revolted in Bamako Wednesday, leading to a full-blown coup early Thursday as they seized government buildings and forced the president to flee.

Junta leader Captain Amadou Sanogo has invited the rebels to hold talks and begin a "peace process" as he tries to restore order.

Bamako was tense on Sunday with few people venturing out as security forces patrolled the streets.

Banks and most shops were shut in the usually bustling city, although some petrol stations have reopened after being asked to do so by the junta.

President Amadou Toumani Toure's whereabouts are unknown, but he is believed to be safe under the protection of his loyalist paratrooper guard, while 14 members of his government detained by the putschists have threatened a hunger strike.

"There are 14 of us in a room of 12 square metres, sleeping three to a mattress. Our basic rights are being violated," said a message from one of the officials sent to AFP.

They are being held at the Kati military barracks outside Bamako where Sanogo is seeking to reinforce the impression of control, holding meetings and making several public declarations.

He met French ambassador Christian Rouyer and other dignitaries on Saturday, state television reported, but the junta has been largely frozen out by the international community in a chorus of rebukes and suspension of aid.

On Sunday, Nairobi announced that the Kenyan and Zimbabwean foreign ministers were evacuated by a chartered flight after being stranded in Mali following the coup.

After widespread looting by soldiers in the coup aftermath, the junta urged "all those in uniform to report to their barracks for an inspection" and reminded unit commanders they were responsible for their men.

On Saturday Sanogo took to the television to show he was still alive and douse rumours of a counter-attack by loyalist troops.

The Tuareg rebels said in the wake of the coup they would continue their offensive, and The Islamist rebel group Ansar Dine, or Defenders of Faith in Arabic, said Saturday its fighters had surrounded Kidal.

"Thanks to Allah the almighty and his blessings, we will soon take our land in Kidal," said a statement from the group.

While Ansar Dine is demanding the imposition of Islamic law, the other rebel group, the Azawad National Liberation Movement (MNLA) has distanced itself from religious objectives.

Mali will on Monday will mark the 21st anniversary of the last coup, when Toure led the overthrow of dictator Moussa Traore and steered the country to its first democratic election a year later for which he is considered a hero.

After Mali's democratic advances in the past two decades, Thursday's coup alarmed the international community which reacted with swift condemnation.

The African Union temporarily suspended Mali, while Europe and Canada froze aid and the United States has threatened to follow suit.

A joint mission from the African Union and Economic Community of West African States met representatives of the junta on Friday, according to Mali state television, without giving further details.

ECOWAS heads of state will hold an emergency meeting in Abidjan on Tuesday, the day the junta has called for civil servants to return to work.