DISSOLVING THE NIGERIAN UNION: SELF DETERMINATION OR SOVEREIGN NATIONAL CONFERENCE 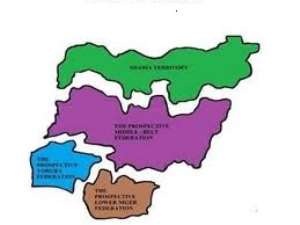 In recent time there has been an increase in the call by the people of Southwest of Nigeria for the convocation of what they term a Sovereign National Conference, SNC. On the surface that may sound impressive, even attractive especially with the level of anxiety on people's minds concerning Nigeria's dire situation. Currently the entrapped peoples within Nigeria are anxious to find quick solutions on how to dissolve the unworkable Nigerian union. In considering viable paths to take and walk out of the deathtrap and dysfunctional madhouse which is also known as the failed state of Nigeria, almost any suggestion appeals to the peoples' anxiety. But the appeal of a SNC lasts until you begin to read further down the script. As you go down the page you start experiencing some discomfort. The stated aim of the much talked about SNC is to review the terms of Nigeria's corporate existence by the various federating nations that are held captive in the god-forsaken union. But this is not time for mere reviews since everyone already knows what is right to do: Divide Nigeria along the existing cultural/religious lines.

The SNC advocacy has its beginning in the 1993 June 12 political crisis when Moshood Abiola's presumed election victory was annulled by Ibrahim Babangida. It was used by the political elites of the Southwest of Nigeria to gain political attention and advantage and, ultimately Nigeria's presidency. As every other thing Nigerian, SNC is a temporary or momentary answer to a very fundamental and permanent or recurring question. The question of why the annulment happened and how to prevent future occurrence was never addressed. It is one of those temporary palliatives or political trump cards being used by the elite class of the various political blocs of the Nigerian union to gain positions and power. Such ruses as wools are thrown over people's faces and used to win positions and plum advantages for the ruling class to the detriment of the people. They are never conceived to do any permanent good for the majority of the people. The Movement for the Emancipation of the Niger Delta, MEND played a similar card to win Goodluck Jonathan's presidency of Nigeria. That has also given birth to the current jihadist Islamic Boko Haram Movement of Northern Nigeria. With the various bombings and destruction of lives, Boko Haram is playing the same card right now and hoping to win. But these games are leading the people and country nowhere. They are deceptive and dishonest ploys which only benefit the ruling class to the loss and destruction of lives, property and future of the people.

Going strictly by the goal of the SNC, the people will merely sit down today and talk of how to continue with a one-Nigeria or dissolve the union. Of course nothing definite or beneficial would be achieved, then a new meeting would be called tomorrow which will say, let's divide Nigeria or let's have a weak or strong center and on and on. I don't care how anyone thinks about it but the truth is that a SNC with the current agenda is merely a device by some elements that are hell-bent on maintaining the killer one-Nigeria status quo. In my opinion the SNC compares with when you intend to tunnel through a mountain and you remove a few boulders every other year. These advocates are trying to buy time while in the meantime Igbo/Biafran people and other Christians are getting killed by one-Nigeria. SNC is like trying to circumnavigate the long and dangerous terrain instead of using the short and less painful route (separation or Self Determination of the various federating ethnic nations). The SNC advocates continue to say hey let's just make one little adjustment here and there and eventually we will get it right someday. For them they are not in a hurry to get it right any day soon since they have little or nothing to lose. It is not the people from the side of SNC advocates that are getting killed. Their progress and development are not being stunted; they are by all standards OK. So, they can afford to buy time indefinitely.

Every sincere and honest political move should always be aimed towards doing greater good for a greater number of people on a permanent basis. And this is the time to use that approach in dealing with the Nigerian situation. The present Nigerian societies have some fundamental and permanently irreconcilable differences. These differences underscore the very basis for any society's existence. It strikes at the very heart of the reason for a society's being and its collective aspiration. If they got it right then all will be well for them but if they got it wrong as it is in Nigeria's situation then everything will continue to be wrong. The worldview of the various peoples that make up the present Nigerian state are antagonistically opposed and cannot be reconciled. A people's culture/religion is the essence of their being or what defines them and the various ethnic components of the present one-Nigeria cannot be reconciled. It will remain a waste of time, lives and material resources in continuing the pursuit of a never-can-work one-Nigerian agenda. The only honest, sincere and permanent good that will be done to the people who bear the brunt of the callous insistence on maintaining the unworkable one-Nigeria is a clear cut division of the country. Let each group with similar cultural/religious worldview go their separate ways and start their journey in nation building.

At this time in the day the people of the Southeast cannot afford the luxury of a SNC with its current agenda or the so-called “true federalism”. Not even the nearly fifty years old Aburi Accord will do the Igbo/Biafrans any good now. There can only be a new and viable roadmap today: Self Determination. If the assumed purpose for the SNC remains merely to decide at the table how the peoples that make up Nigeria will co-exist or maintain a weak or strong center, then for the Southeast it is a waste of time. The position of the people of the Southeast is that any solution to Nigeria's problem that is short of clear division along the naturally occurring national/ethnic boundaries is a waste of time, dishonest and insincere, cannot last and is unacceptable to them. The Igbo/Biafrans want independence and total freedom from Nigeria. They want an arrangement where they can only relate with the rest of the Nigerian components as neighbors and citizens of different countries and no more. This is the era of Self Determination and the Christian Igbo/Biafrans will take the full advantage of the moment to be free from the Nigerian bondage.

The Igbo/Biafrans will not be deceived into anything that looks like the real thing. From all indications the calls for SNC remain nothing short of another veneered deception from familiar quarters, at best a delay tactic. The Southeast is not interested in any arrangement of weak or strong center of a one-Nigeria. The Igbo people of today will not do the job half way and leave it for coming generations to continue grappling with the same problem of a one-Nigeria. No, the Indian/Pakistanis split of 1947 and the Sudanese/South Sudanese split of 2011 are the examples the Igbo/Biafrans are following. It is also interesting to note that these countries as mentioned were also colonized by the British. The only difference is that when the British left the peoples of these countries were honest, sincere and bold enough to revert to their old pre-colonial conducive, convenient and cultural/religious boundaries. They never had to maintain any kind of meaningless “true federalism” or a childish sentimental “weak/strong center”. They chose the path of wisdom, the path of dignity, the part to permanent peace, the path to the respect of the sanctity of human life and the path to progress and development. Boldly they did the right thing by walking the honorable road of Self Determination. These countries chose the only reasonable and dignified road; a clear, complete separation and independence from and of one another rather than stay together and kill off each other. No one is bound to win in any ridiculous piecemeal approach to Nigeria's festering problem of diversity. Every honest and sincere player in the Nigerian arena had long come to agree that there is just one solution: Self Determination or the Sudan/South Sudan Solution is the only option available for Nigeria. It can only be delayed but can never be wished away.