To Igbo Leaders: You Are Inexcusable. 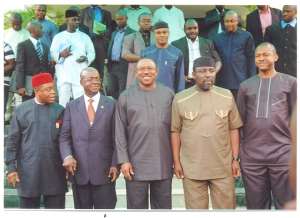 Twice I have written to those who lead my people – to Igbo leaders and Governors; now, I'm writing again. When I first wrote, it was to remind you of your duties; but this time, it's to let you know that we all know how treacherous you have become and that none of you can be excused. Furthermore, it's to let you know that, even if you have sold your souls and the destinies of your families to the devil, Igbo shall experience and live in the freedom which God has given us. And without mincing words, I would like you to know that every betrayal will be adequately punished. It's only a man who hates himself that denies his neighbor his rights to a dinner and expects to sleep well with his own overfed family; disaster comes upon such a wicked man unannounced. Life becomes a dangerous place to live in when men worship in fear. Those who fail to speak the truth because of the fear of those who have made themselves gods over all others – such people are the ghosts of themselves. The devil is not the one to fear, how much less can man fear those who are supposed to be serving them, and expect to be excused? No way! God alone is to be feared. It's absolute ignorance for the South-East leaders, or even any leader in Nigeria for that matter, to think that corruption is wealth and that those who see themselves as the untouchables should be feared. It's absolute ignorance! What is there to fear: death perhaps? A man who fears death is a man who is not sure of himself; such a man should repent and straighten-up his ways because, one way or the other, we shall all transit someday. I said all these to clearly let you all know that I have nothing to be afraid of when I speak the truth, and that, unless God changes, my life remains eternally in Him. The evil which my eyes have sin has corrupted the power of fear in me because God has revealed where life lies; only God is to be feared forever and ever.

Nigeria is no longer safe for Ndigbo, and everyone knows that. Although this was clear enough before independence, many still hoped against hope for the survival of a hopeless and dead seed called Nigeria. While you, Igbo Governors and leaders, are busy sanctioning the deaths of your people and denying that any has died in the hands of the Boko Haram Republic of Arewa and by the Nigerian security agents, the entire Northern leadership is spitting fire and brimstone. While betrayers like Governors Rochas Okorocha and Martin Elechi boldly renounce their people and spat on the graves of those whose deaths have created a society of Nigeria-made widows in Igboland by denying that any Igbo ever died in the North, The Northern government gave out N100, 000,000.00 to the family of the dead BH leader. As the entire Igbo Governors, except Peter Obi of Anambra state, ignore the many deaths of Igbo in the hands of the Northern generation – deaths which have necessitated Igbo refugees in Igboland – the Mallam of bigotry who has hijacked the CBN shares the national money amongst his religious and tribal families. While you make every effort to kill, torture and imprison legitimate MASSOB members in your states, the Northern leaders are busy sponsoring and openly defending Boko Haram and their agenda. And when you have refused to either protect or defend your people for the sake of your accursed vision of an accursed One-Nigeria, it might interest you to know that the leaders of the North have proven to be more of men than you: they would never trade anything for the rights of their people, and they are always ready for war and to kill if that is what they must do to get their way. And while you are wimpishly trailing behind your counterparts in other states of the accursed Nigeria, but showing off muscles before your kinsmen, Arewa leadership, through Senator Joseph Waku, have made their stand clear enough. Here, I do not wish to recount because it's largely obvious to all – both your weakness which only finds strength against those you were meant to protect, and the forcefulness of your Northern counterparts to keep dominating your generation and making you all look as big-time incompetent and incapacitated fools before the steadily watching world.

I know how vain man is; how proud and empty can those who found themselves leading in Nigeria be then? The so-called Zik of Africa gave Igbo up for the accursed One-Nigeria but, today, his professor wife is complaining of money for food. Ojukwu refused to take part in the 1966 coup because he was a man of justice. But, by his innocent inaction, Igbo all over what is called Nigeria became the targets of every other Nigerian. And when he discovered that he was in the midst of foes who did not understand anything called justice, he moved to a defensive position. Today, all Igbo are involved witnesses to the torture and vanity of trusting anything Nigeria. The president of the country was and is still supported to the full by entire Igbo nation, yet he has only made political statements to the repeat of the pre-war massacre of Igbo in the North. IBB is chanting another genocide, Sanusi is financing Boko Haram; Northern leaders are defending Boko Haram; Northern lawyers are working to Islamize Nigeria, while Boko Haram itself is burning up everything they can which they perceive as passively or actively against their agenda. While they do all these, the Hausa/Fulani soldiers are busy torturing and killing Igbo in the South-East. My questions to you Igbo leaders are, therefore, these:

2. Why would injustice against Igbo become a legalized character of the Nigerian state where we are a part?

4. Why have you not openly declared that it's lawful and legal for MASSOB to do what they do, and back them up with every necessary support?

6. Do you really believe that Igbo have not been tortured, marginalized and shamed enough in Nigeria to append your signatures to a formal petition for secession from Nigeria to the UN?

7. Are you among those who truly believe that the constant blood-sacrifice of Igbo is what Nigeria needs for success and continuity?

8. Can you not see that this generation of Igbo are masterly being frustrated in Nigeria by the Nigerian government and the Northern warriors in your very eyes? If the government of Nigeria will not protect Igbo in the North, will not allow them their rights in the South-East, and will not build a single Federal presence in Igboland, what more rights to you, Igbo leaders, have to silence and patience on the ill-fated abomination of an amalgam called Nigeria?

9. For how long will a prince serve as a slave in his father's house; or perhaps you deceive yourselves to think that Igbo youths are weaker than those of the 60s – that we can't stand our ground? No! It's you who deprive us, who invite the enemy to invade our privacies.

10. Who bewitched you?
Everything has been said; you cannot be excused. A generation of Igbo who are deadlier against injustice than you can ever imagine are springing up; and you will be the first consumed in justice. I do not have to beg you to do what you were elected or appointed to do – which is to protect the interest of Igbo first and foremost; I have no interest in playing your politics. But I can authoritatively tell all of you who are involved that you cannot escape your due punishment for the wickedness and callous treatments you have continuously meted out on Igbo race. God will adequately judge you and every seed you planted with the blood of your people. God will judge you all and judge those with whom you have entered pacts to destroy your posterity. And God will judge in righteousness and on time. When you sit on the rights of your people and you do nothing about the unabated marginalization of your people even when you have every power to challenge, dismantle it, and open a new chapter for your people, then you are in no way excusable; judgment will eat you and everything you have built through this wickedness up.