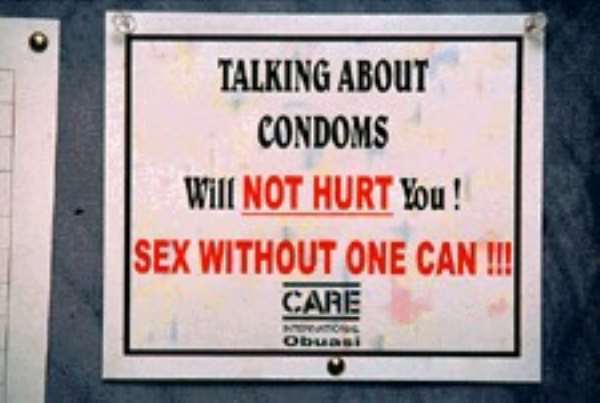 Koforidua (Eastern Region) - Resource persons at an anti HIV/AIDS talk were shocked to learn that despite the high prevalence rate of the disease, second cycle students in the New Juaben Municipality still engage in the practice of "blood covenant."

Blood covenant is an age-old practice where lovers inflict cuts on a finger each and then bring the wounded fingers together for the blood from one to mix with the other partner's to signify a promise that they would never break their relationship till death.

Those engaged in the practice believe that the one who would break the relationship would die prematurely. The Koforidua Municipality has an HIV/AIDS prevalence rate of 8.5 per cent, the highest in the country.

This came to light at a film show and an anti HIV/AIDS talk organised by the Koforidua branch of the Planned Parenthood Association of Ghana (PPAG) for students of the Solomon Commercial College at Koforidua on Thursday and sponsored by the Ghana AIDS Commission.

Kweku Boateng, New Juaben Municipal Co-ordinator of the National Youth Council (NYC) told the students that the blood covenants never worked and that students involved in the practice often jilted each other.

He urged them to desist from such practices since it could expose them to the HIV virus. They should rather concentrate on their education and protect themselves from contracting the virus.

The Deputy Eastern Regional Population Officer, Mr. Kofi Agyei-Baafi advised the students to avoid situations that exposed them to sex like watching of pornographic films and pictures and discussing sex with friends.

He urged the students to practice abstinence since condoms could not provide them the protection they required if not used properly.