Gowon And The Curse He Took Home: Nigerians And Their Harvest. 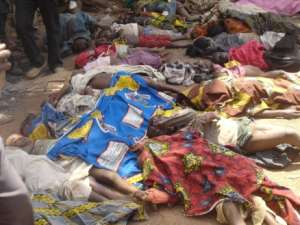 By Ikechukwu Enyiagu, [email protected]
Yakubu ("Jack" Dan-Yumma) Gowon, the man accorded 'General' for his led genocide against Biafrans, is the symbol of the curse of Nigeria today. You will do well to pay close attention to me because this is no a vain saying. He is the symbol of Nigeria's evil, wickedness, stubbornness, and prevailing curse. When God punishes a king, his subjects-those who support him while he goes about his many abominations and defiling of God's name, people, and temple-will suffer even greater consequences. Such a man has an end that visits the wicked and ungodly. The danger of having a wicked king, who has no fear for God or feelings for his subjects, is that his end is a long experience of spiritual torture and regrets, and his subjects, especially those who bow before him in false adoration, exclaiming: “Long live the king-” these people shall not go unpunished; their generations shall meet the consequences of their fathers' rebellion against truth, and shall partake of the results of self-induced ignorance. Yet, to those that have parted ways with a life of lies and illusions, those who have recognized and accepted their sins and the consequences thereof-to them, there may yet be a way out. But for Yakubu Gowon, the man who led Nigeria, Britain, Russia, and the entire Arab in a hell-conceived plot to “wipe Israel off the map,” his generation shall know no peace. He will live to see the full result of his choices made out of great hatred for a people who have only done well in the land-to a people who offered themselves and their tribe to bring positive changes wherever they may be found. Ojukwu may have died today, yet he has gone home to rejoice; but you, Gowon, shall live to suffer the full wrath of the demon you have unleashed on yourself and your people. I make bold to tell you and all who care to listen: you killed Nigeria and paid her burial with the blood of over one million Ndigbo. Since you championed “one Nigeria” where Igbos are the sacrificial lamb and the slaves, and since Nigeria has died, you shall die with her-you and your generations. You are happy Ojukwu died as a Nigerian, really? It only goes to show your eternal hatred against your very self and against your generation, because hating Igbos only means hating your life; and opposing a realized Biafra is called self-opposition. What choices do you still think are available to your dying soul; what more resistance can you put up which has not already been quashed? Your statement clearly displays the vanity of a callous and unrepentant man who still believes, even after 40 years, that a united Nigeria is depended upon the continued slavery of Igbos. You remain the greatest curse and the worst thing that has ever befallen Nigeria, even though you are alive.

Plateau state today has become the first graveyard of the judgment on Nigeria, courtesy of the acclaimed “General of Nigeria's unity.” Blood has spilled on the ground of Plateau state to the very level where unbelievers should believe, and where rebellious people should repent and obey. This is the hometown of the said General of Nigeria's unity, Gowon. Who shall deliver you; who is there to save your families? No one! Plateau has become the Armageddon of the North, the judgment place against Nigeria. And this blood is spilling over…ever to yonder places, to those whose signatories saw to the Biafran genocide. It has become a wave of fire and transported by the wind. Presidents have come and gone without addressing the issue of Biafra, and God has stamped His feet against Nigeria. Leaders have brought up many measures to, according to the only true General Nigeria has ever seen, Dim Ojukwu, “patch things up,” but everything has gone from bad to worse. Don't live in rebellion because that is the only blindness that truly blinds. Nigeria was cursed the day it went to war against Biafra, and as in justice, the man who championed it will suffer more terrible fate than others; Gowon brought punishment to his people. Where are those songs sung during the massacre; where are those who said they were fighting to kill our fathers, brothers, husbands, and sons; where are those who sang on national broadcasting stations that they would rape our mothers, sisters, wives, and daughters? Where are they today? Even in your midst, you are being killed and raped by your sons-the sons you bore in abominations. The judgment has long begun and the angel in charge has no mercy to give. Your fathers, brothers, husbands, and sons shall be slaughtered in broad daylight; and your mothers, sisters, wives, and daughters shall be raped in your presence before being slaughtered as well. Those Igbos killed amongst you can only be a breed of those who have hated their lives for the sake of the world; and to them who walk in the counsel of the ungodly, who stand in the way of sinners, and sit in the seat of the scornful-to them shall the judgment of the guilt befall. They are equally counted for the rebellious and shall be punished alongside. Those who forfeit the spirit for the flesh shall lose both in the days of accountability and recompense.

Chief Chukwuemeka Odumegwu Ojukwu led us in a defensive fight against the invading team of Dan Fodians; he never started any war. It was the very spirit which led Usman Dan Fodio to invade the North that led the genocide mission against the Christian South-Easterners. No man born of a woman has any rights to compel a dissatisfied man into remaining in an unholy marriage; even husbands have lost right to keep a dissatisfied woman beyond her wish. The massacre of Igbos in the North should have been more than enough to appease those whose generation came from a bloodline of murderers; from those whose god feeds on the blood of the innocent, and before whom killing of innocents is a direct passage to paradise. The very reasons the spirit of Biafra manifested when he did have always been there, and even now, in their dynamic explosions. Igbos are still killed, Igbos are still deprived, and Igbos are still hated in all of Nigeria. You only have to be an Igbo or a Christian to incur the wrath of the murderous North. To hate an Igbo man has become a culture in Nigeria and not even the forces put to compel the deluded Nigeria's unity have been enough to stop the bloodsuckers from seeking the blood of my people in every corner and for any reason. Dim Ojukwu was a man no Nigerian, past and present, could ever be; he is a man who saw the truth and stood for it. He stood for his people, and against corruption. The clear disparity between the man, Ojukwu, and the so-called leaders that Nigeria's genocide against Biafrans has produced in Nigeria today, is largely evident. While Ojukwu forsook self and fought all the way, with all he had, to defend his people, Nigeria's wickedness only produced leaders whose only agenda is self. They care for themselves alone; even a neighbor is a stranger to them.

The effect of Gowon's rebuttal, refusal, and denial of the Aburi Accord, which he signed willingly after having understood it, rubbished whatever is left in Nigeria's legitimacy to sovereignty of a nation where Igbos are a part. A so-called General, the so-called president of Nigeria, who found it hard to match Ojukwu in common sense, ought to have allowed Biafra to go. But, no; his strength was in his guns, bombs, Her Majesty and the Arab league whose only agenda in the world is to enforce one faith, yet their very people have turned against them even this day. It doesn't matter how long the man of gun compels, one day, his gun shall become obsolete, and him, powerless, helpless and judged. The mighty hand of God will assure that. It does not matter how long Nigeria's rebellion holds, eventually, the hand which pressed down the truth will be weak and broken; and it will fall off. Compulsion never achieved anything lasting; if anything, it breeds great animosity in generation after another against those who compel-even against their generations unborn. It's the same blood.

Biafra is the only solution for Nigeria; a separate state called Biafra is the only remedy for Nigeria's ever increasing and chronic illness. The constant waving aside of this possibility is a clear indication of utter ignorance which destroys. Biafra is! To any country or government which went through the story of Nigeria and Biafra, the events of these last forty years are enough to pinpoint the log which holds everything back. The delusion of Nigeria's leaders-past and present-is the constant decay of whatever is left of Nigeria. To some who believe that the Biafran war should be likened to those fought in other places that eventually remained as one, you are equally deluding yourself because you have not done your research well enough to notice the clear uniqueness of the 1967 war in the west of Africa. To those who loot public funds and refuse to call for a Sovereign National Conference, you shall not escape. The judgment shall start from you. And even now, it has. Gowon and those who followed his orders to “wipe Israel off the map” have only one thing remaining to be grateful for: An independent state called the Republic of Biafra. And to every government that comes and goes without addressing the issues of the wickedness which the entire Nigeria and its government meted out on Biafrans, you will never succeed. As long as Biafra is a sin in your mind, you shall remain an abomination before heaven. And be sure that your wheel is forever stuck. Your rule shall be sustained with chaos and your end shall be more disastrous than you came in to see. You, too, cannot go unpunished. And, no matter how long your rebellion stays, Biafra will eventually stand; and it shall not delay longer than written. Ojukwu's transition didn't erase it, it rekindled it. Be sure of this.

'I will come to Accra report you to Akufo-Addo' — Otumfuo an...
32 minutes ago