At climate talks, an African approach to the deadlock 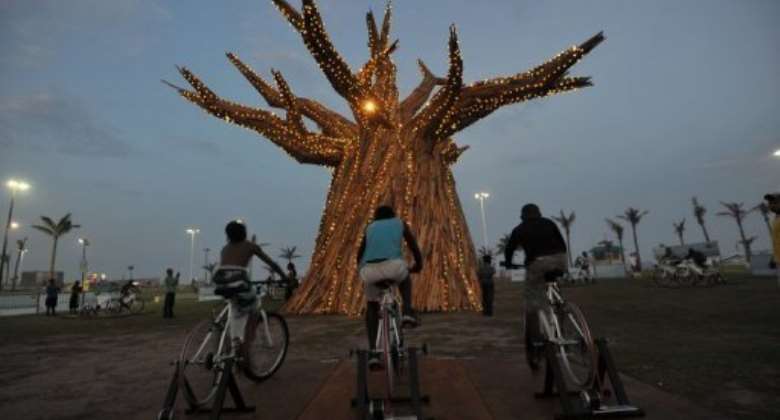 South Africans light up a baobab tree in Durban by riding bikes. By Alexander Joe (AFP)

DURBAN, South Africa (AFP) - To the European eye, the leafless black tree that is the logo of the UN climate talks here looks alarmingly like the symbol used back home to denote containers of toxic waste.

To the African eye, though, the picture represents something quite different.

It is a baobab, the slow-growing giant which in many villages provides shelter from the sun and becomes a place where people meet and talk.

This totem of resilience and community is one of several ways in which host country South Africa is delving into African culture to try to ease negotiations that have been perilously deadlocked for years.

One gap-bridging technique is an "indaba", a word in the isiZulu language that refers to an informal forum where all can take part and all can voice their thoughts -- but they must also come with a desire to listen.

"In successful indabas, participants come with open minds, motivated by the spirit of the common good, listening to each other to find compromises that will benefit the community as a whole," says the UN Framework Convention on Climate Change (UNFCCC) on its website.

Last week, the South African presidency of the 12-day UNFCCC gathering held three indabas, touching on some of the issues that have so badly divided the world's nations.

They include sharing out responsibility for reducing greenhouse gases that stoke global warming, the future of the Kyoto Protocol and setting up a super-fund to help poor countries most exposed to climate change.

More indabas are expected this week.

Informal talks under the presidency of the host country are a vital part of the nearly two-decade-old ritual of climate negotiations.

But some of these contacts are far more successful than others. Two years ago, Denmark's presidency was hugely criticised for being hard-edged and clumsy.

The Copenhagen Summit came within an inch of fiasco, saved only at the last minute by a lowest-common-denominator deal agreed behind closed doors by a handful of leaders.

In contrast, the mood was better last year in Cancun, where Mexico gained high marks for cajoling and coaxing a deal that restored some momentum to the damaged process.

"Just the fact that they are calling this an indaba has already put an African imprint on that consultation," UNFCCC Executive Secretary Christiana Figueres told AFP.

"It is the calling together of the elders to sit around a table when there is a divergence of opinion to listen to each other carefully in order to find collective wisdom for moving forward.

"That's a beautiful description of what is going on here, and has helped countries come to the table to not only put forward their positions but listen."

South Africa has also brought up some heavy moral weaponry to help its effort: the apartheid struggle.

It is being presented here as a victory for all against odds that for decades seemed overwhelming.

Nobel laureate Desmond Tutu recalled the long campaign at a rally on November 27 on the eve of the conference.

"Now we are facing another huge, huge enemy. And no one, no country can fight that enemy on his own... an enemy called global warming, climate change," the 80-year-old former archbishop said.

"We have only one home. This is the only home we have. And whether you are rich or poor, this is your only home ... you are members of one family, the human race."

Figueres invoked anti-apartheid icon Nelson Mandela as a source of inspiration, quoting him as saying, "It always seems impossible until it is done."

Whether, by Friday's close, African notions of inclusiveness and the soaring example of Mandela will overcome deep rifts of national interest remains unclear.

For optimists, baobabs are the perfect symbol of victory over adversity. Known as the "tree of life," they can be burnt or stripped of their bark, and they will just form new bark and carry on growing.

For pessimists, though, baobabs take more than 70 years to reach maturity. To have patience is one thing: but to be able to respond to an emergency is another.