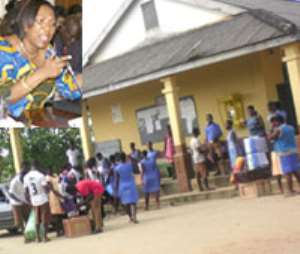 Participants at a consultative forum on the Affirmative Action  Bill, held in Ho, have appealed to the government to put in place tougher punishments against those found violating the basic rights of women, as well as ensure the full enforcement of laws that protect the rights of women and the less-privileged in society.

The women pointed out that there seem to be deliberate attempts to frustrate them, particularly, those who want to venture into politics, and that it would not be out of place for the government to outline programmes and activities aimed at encouraging women to fully participate in the decision-making process.

According to the women, even though they formed the majority of the population, their representation in the District Assemblies and Parliament still remained a matter of concern to civil society groups and non-governmental organisations.

They regretted that anytime they tried to stand for elected positions, or participate in the various levels of decision-making, they are normally intimidated and discouraged, adding that the government should facilitate the early passage of the Bill, to help address the various problems women face in society.

They, however, commended the Women and Children Affairs Ministry and the regional offices of the Department of Women, as they tried to create opportunities for women to participate at various fora.

Contributing, the Volta Regional Minister, Mr. Joseph Amenowode, lauded the efforts of women for their commitment and readiness to offer support to bring about, what he described as crucial and important changes that required ensuring equity and equality for the participation of women in the governance process of the country.

Mr. Amenowode stressed that the empowerment of women to ensure gender equality, was the most effective way to combat poverty, hunger and disease, noting that women empowerment was also the surest way of achieving almost all the Millennium Development Goals (MDGS) by 2015.

The Minister pointed out that women empowerment and other related issues could never be achieved without their adequate participation and representation in the country's decision-making process.

This was because women, by their natural attributes, were able to better understand and articulate the issues affecting society from a far wider perspective, thereby, bringing increased dynamism into the decision-making process.

Mr. Amenowode noted that women empowerment could only thrive on paying greater attention to the education of women, which he said, would ultimately help in improving their socio-economic status, and promote the education of their children.

He, however, regretted that in spite of all the efforts being made by government, the number of women elected into the Metropolitan, Municipal and District Assemblies (MMDAS) was still below expectation.

Mr. Amenowode gave the assurance that the government was prepared to do everything possible that would enhance women participation in the decision-making process, saying the government was very much committed to ensuring an improvement in the performance of women in the next parliamentary elections.

The Minister said the government was committed to introducing major policy and legislative reforms aimed at a minimum of 40 percent representation of women at all levels of governance. He added that the government also accepted the objectives of the Women Manifesto for Ghana, which was published in 2004.

The Acting Volta Regional Director of the Department of Women, Madam Thywill Eyra Kpe, noted that her outfit, in collaboration with other agencies, would continue to collate the views of partners and stakeholders for the development of affirmative action legislation, to help increase women's participation and representation in governance and high decision-making positions.