BIAFRA, STEVE JOBS AND A WORLD IN MORAL CRISIS 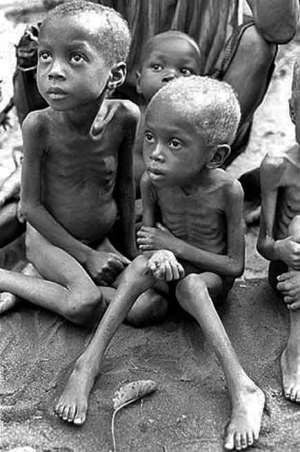 In the recently released Walter Isaacson's biography of Steve Jobs it was revealed that Jobs became an agnostic and stopped going to church, felt disappointed in Christians after seeing what happened in Biafra and how the so-called Christian nations handled the sordid Nigerian Genocide in Biafra. For some people Jobs' reaction comes out as extreme to even a most abhorrent and horrifying incident such as the Biafran Genocide. But it could not have been otherwise. All decent and reasonable human beings since history have always come to the same conclusion; that extreme cases can only be met with corresponding extreme reactions. To place it in the correct perspective, we have to realize that religious faith to a believer is regarded as the very reason for living and hope for afterlife and when a believer looses his faith it is compared to death. So Jobs chose to “die spiritually” in order to prove the seriousness of the miscarriage of justice in Biafra by the rest of the world community. And to those who are reading this and are believers what does your faith worth to you? For Jobs faith is only useful to have if the believer can use it for the benefit of others and the promotion of justice in the world. As a reader of this, are you a believer? The Biafran Genocide is still pending and crying out for justice, what are you prepared to sacrifice personally to see that justice is done about the Genocide?

No one who would not have been repulsed at the picture of Biafra's little children and their mothers which was the handiwork of the combined forces of Nigeria, Great Britain, USSR, Egypt, the Arab League, etc that ganged up against a very weak and vulnerable part of humanity – Biafra between 1967 and 1970. Together these powerful countries murdered 3.1 million Biafrans. The boy Jobs was horrified with the Biafran Genocide. It is in the nature of geniuses to project into the future and away from themselves. Being a genius gives whoever the special ability to see and feel it almost exactly the way the other person would. Steve jobs felt Biafra and Biafrans' pain and condition and he understood completely the truth about the situation. He also understood what the solution should be. He was a genius but the truth can also be seen by all who are willing to. Jobs was a genius and knew almost at a glance that the only permanent solution to Biafrans' sufferings then as well as now and forever is the permanent separation of the people and their land from Nigeria instead of sacrificing millions of children and their mothers for a unity that can never hold. Jobs expected the Christian nations to see the obvious and do the right thing. They did not and Jobs as well as the other truth-loving and compassionate part of the human society were disappointed. In the face of such injustice and gross crime against humanity as was and still being committed in Biafra no one needs to be a genius in order to see the truth and condemn injustice anywhere in the world. Just like we do not have to invent the car in order to drive or ride in one? Also, fighting injustice, oppression and untruths is not just the duty of the third party who is not directly affected by the evil; the victim must and, in most cases is expected to spearhead the fight against the evil and perpetrator. So it is expected of the direct victims of the Biafran Genocide to mobilize and initiate actions to get justice done in the case.

Nigeria is genocidal. The country is still full of ethnic hatred against Biafrans, and it is surfeited and intoxicated with Islamic religious bigotry and jihad and can never be different. It is also expected that all truth lovers and honest writers and intellectuals who comment on the issue should stop using some silly circuitous languages and wasting too much effort at trying to feed their audience with everything but the truth of Nigeria's inevitable demise. Such sophistry is nothing more than dishonesty and deception of the people who look up to the social commentator to truthfully articulate social situations and present them in honest and sincere packaging for their trusting audience. Hiding the obvious from the people can never make the negative condition go away but rather casts the deceiving intellectual in a very demeaning light. Sometimes such dishonest commentators try to hide behind the ridiculous guise that the people cannot handle the truth or are not yet ready to hear the truth. What else can be more insulting of an audience than that? Which hurts more, the truth or lies? The only truth that is worth telling about Nigeria is that it should be divided up along the lines of the naturally occurring nations to stop the bloodshed of innocent children and that of their mothers. Divide Nigeria today.

Yes, Jobs was a genius and the truth came to him quite easily and he used it to change the world. But anyone willing can also change the world by using the truth as Jobs did. It is truth that changes the world. We all can change the world as geniuses in our own rights by working to project the truth about the Biafran Genocide. It is that simple. Is it because Jobs was a genius that he could fulfill to the shame of the rest of the world and even some of those who are directly affected by the repulsive Biafran Genocide the proverbial saying that the adult sees very much further sitting at the foot of the tree than the child who climbs to the top? That is very doubtful because not all adults are geniuses. But all adults have the experience of years and should know what is right and wrong. For all who saw and still see Biafra and still remained non-nauseated and moved to challenge the world's sense of morality and justice, Jobs saw too many contradictions very difficult to stomach and pretend about. So from this we know that the kind of the knowledge of truth that changes the world and makes it a better place is the kind that makes the knower to do something practical and positive about what he or she knows. If you know something about the Biafran Genocide, what practical thing are you doing about it? For anyone who has faith we know that faith makes someone not just want to do but actually do something about situations.

Steve Jobs saw Biafra and knew what was and still is right about her, he told us and protested in the severest of terms to prove to us how serious the world should take the issue of Biafra. Jobs chose to die to prove the truth of Biafra. It was one of those voluntary choices of the genius that makes the world a happier, healthier and just place such as was made by Barry Marshall, one of the two Australians who received the Nobel Prize for medicine in 2005 for their work on finding a cure for peptic and other ulcers. When Marshall and his partner Robin Warren told the world that stomach ulcer and the other ulcers are caused by bacterial infections, the world doubted them. The world doubted because for centuries it had become accepted even “established” that ulcers were caused by stress and hunger. As the noise and din of those (the rest of the world) who disagreed with them continued to increase, Marshall did the only thing a genius would have done; he “died” to prove his point. Marshall ingested the bacteria that cause the disease of ulcer to infect himself and used effective antibiotics drugs to cure himself.

Jobs and Marshall took practical steps to prove their belief in something. And the question today for all who are reading this is what practical steps are you taking to show your belief in the injustice that is the Biafran Genocide? Every decent member of the human race alive today can voluntarily choose to do right by Biafra, Biafrans and their pains by “dying” for what is true about the Biafran Genocide. Everyone can become a genius and a hero just by believing and acting on this truth. Or just as we are all happy and satisfied users of the products of the faith and belief of the geniuses of this world, everyone everywhere should show interest and be identified with the Biafran Genocide as part of our common humanity. Let Biafrans show their patriotism to Biafra and brotherly love for fellow Biafrans and holy anger and even hatred for the genocidal Nigerian state. Everyone should ask him or herself what have I sacrificed or what action with far reaching personal consequences have I taken to show my feelings about Biafra? If you are directly and personally affected by Nigeria's genocide in Biafra, what steps have you taken to express your disaffection about the injustice?

Steve Jobs has not only immortalized himself in the hearts and minds of billions of people all over the world in the iPhones, Apple computers and many other excellent products that he conceptualized to make our lives better on this planet Earth he also voluntarily gave his life, his Christian faith; he died and now he will live forever in the hearts and minds of all Biafrans as the young boy at 13 who denied himself to show interest and solidarity in the pain and sufferings of other people. Like Steve Jobs everyone alive today can be guaranteed that if they can be bold and sincere enough to do something about the Biafran Genocide they will become geniuses, heroes and immortals in hearts and minds of the 3.1 million Biafrans who were mercilessly murdered by the Nigerian state and its allies.

If you are a Biafran what are you called to give up for the sake of your brothers and sisters and Fatherland? Maybe it is money or other material comforts? As a little boy or girl of Igbo/Biafran heritage can you sacrifice your lunch today in order to donate the money for the success of Biafra and the pursuit of justice for the Biafran Genocide? Yes, Jobs was a genius, he saw and did something about injustice and oppression when most of the world did not care, but rather actively contributed to advance the Genocide. But because it is that easy to conquer and defeat evil with the truth, anyone alive today can also choose to be the caring and benevolent genius and hero of Biafrans like Jobs by doing something about the Biafran Genocide.

You’ve been a dependable husband – Lordina celebrates Mahama...
1 hour ago