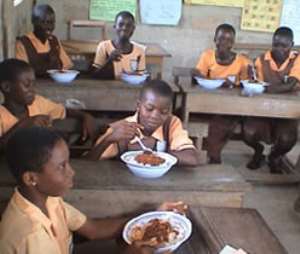 Accra, Sept. 16, GNA - The Ghana School Feeding Programme (GSFP) is being reviewed to ensure efficiency and effectiveness in meeting its objectives.

In addition, it is being re-organised as part of the on-going preparations towards introduction of the next phase of the programme.

This was contained in a statement signed by Mr S. P Adamu National Coordinator of the GSFP, copied to GNA in Accra on Friday, on the re-organisation to strengthen the operational and delivery capacity of the programme and enhance its effectiveness in attaining its short-term objectives.

The GSFP is an initiative of the Comprehensive African Agricultural Development Programme (CAADP) Pillar III and part of government's efforts to attain the Millennium Development Goals (MDGs) One and Two, which seek to eliminate extreme hunger, poverty and achieve universal basic education.

“Accordingly, the development goal of GSFP is to enhance food security and reduce poverty,” the statement added.

It said the short-term objectives are, to reduce hunger and malnutrition, increase school enrolment, attendance and retention, and boost domestic food production in deprived communities of the country.

The statement said the development objective is to reduce poverty and enhance food security.

It said the basic concept of the programme was to provide children in public primary schools of the most deprived communities of Ghana with one hot nutritious meal, prepared from locally grown foodstuffs, on every school going day.

The aim is to spend 80 per cent of the feeding cost in the local economy.

The statement said the first four-year phase (2007-2010) of GSFP officially ended in December 2010, and the government has granted a year's extension (January to December 2011) to allow for a proper wrap-up of the first phase and the planning of the next programme phase.

It said the current re-organisation, which includes the re-targeting is part of the end of phase activities and the broader context of the re-organisation could be found in the Coordinated Programme of Economic and Social Development Policies for 2010 – 2016, which was presented by President John Evans Atta Mills in December 2010.

In that document, the re-organisation was announced under Social Protection and Inclusion as follows: “Government will review the framework for the implementation of the School Feeding Programme and in particular streamline and strengthen the operational and delivery capacity of the Programme”.

Various components of the re-organisation are, sensitisation of key stakeholders including the re-organisation which started in January 2011 with sensitisation and consultation of stakeholders of the programme including farmers and caterers in all the 10 Regions, media personnel in the Regions, Parliamentary Select Committee on Local Government, Metropolitan, Municipal and District Chief Executives.

The statement said collaborating bodies are Ministry of Food and Agriculture, Ministry of Education, Ministry of Health, programme managers at the national regional and MMDs as well as development partners.

It said inputs were taken from all these stakeholders before proceeding with the actual implementation of the re-organization and efforts were being made to retarget and expand the programme to feed up to 1,040, 000 pupils by the end of 2011.

The statement said under the retargeting and expansion the beneficiaries have been reviewed and following this, the GSFP would begin to feed 973,313 pupils this school term.

In addressing the issue of poverty, the statement said there was the need to prioritize the most deprived areas.

It said “in Ghana the three northern regions and central region are the most deprived, regrettably these regions are not receiving commensurate allocation of beneficiary schools under the programme.

“The approach of Home-Grown School Feeding (which Ghana is practicing) is one that relies on local agriculture production. Therefore there is the need to focus on the poor farming communities where the link with agriculture can be maximised.”

The statement said there were still some urban poor communities in Ghana that were not covered by the programme and the retargeting seeks to rope-in these poor urban communities.

It said “The programme is not achieving the objectives of boosting domestic food production towards enhancing food security through linking school feeding to local agric production. Part of the reason is that the big farms that feed the nation are not found in the cities.”

The statement said there was the need to streamline the targeting and make the GSFP more effective as a strategy to reduce poverty and enhance food security before rolling out the next programme phase.

The statement said review of the contract of caterers includes “Caterers of the school feeding programme, engaged by the various District Assemblies on contract basis. Experience has shown that the situation where one caterer feeds about 1,500 school children interferes with instructional time at school. Therefore from this academic year, each caterer will cater for a maximum of 500 pupils. The various District Assemblies are currently implementing this new arrangement.

It said “Commencement of feeding for the current academic year: In view of the re-organization, the various Metropolitan, Municipal and District assemblies will review the contracts of existing caterers and engage more caterers for the programme.

“The arrangement for commencement of feeding is as follows: Feeding in old beneficiary schools who have caterers under contract will start on the 19th of September, 2011.

“All MMDAs have been instructed to engage new caterers using the laid down procedure for engaging caterers as specified by the Programme and in accordance with the expansion and the policy to assign a maximum of 500 pupils per caterer.

“All MMDAs have been instructed to finalize this process as soon as possible and the programme expects that by October 3, 2011 all engagements with school feeding caterers based on the new arrangement must be finalized.”

The statement said “The facts about the Dutch Government's support for direct feeding and technical assistance is as follows:

“1.The Dutch Government pledged to support the Government of Ghana with feeding grant for the first four-year phase of the Ghana School Feeding Programme (2007 to 2010).

“3. Following the suspension, the Government of Ghana assumed full responsibility for the feeding of over 700,000 pupils under the GSFP

“4. The Dutch Government through their embassy gave conditions which boarded largely on the implementation of the recommendations of the 2006/2007 audit report.

“5. The Government of Ghana through the Ministry of Local Government and Rural Development satisfied the conditions and the Dutch Government consequently resumed their support for direct feeding in 2009.

“6. Upon resumption of their support in terms of providing feeding grants, the Dutch Government released GH¢ 13,378,414 to the GSFP in 2010.

“7. The Dutch Government has also pledged to release all outstanding payments for feeding due the GSFP for the first phase after a satisfactory audit of GSFP 2010 accounts.

“8. The Dutch Government is yet to indicate their intention regarding direct feeding grants for the next phase of the Programme.

“9. Besides the feeding Grant the Dutch Government and Dutch organizations are among the most vibrant partners of the GSFP today.

“10. The Dutch Government is funding the evaluation of the first phase of the Programme to the tune of about GH¢ 300,000.

“11. In addition, the Dutch Government together with Netherlands Development Organization (SNV), School Feeding Initiative Ghana Netherlands and the Government of Ghana is funding the implementation of a Social Accountability Project under the GSFP.”