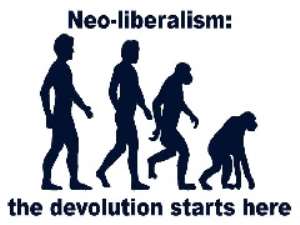 Market Liberalism
The free market is not simply 'exchange' or 'trade'. Two people who exchange products cannot form a free market in the liberal sense, even if their transactions are monetarised. The element of competition is missing in this two-person society.

A minimal liberal free market needs at least three parties, with two of them in competition - for instance, two competing sellers and one buyer. The resultant pressure on the two sellers to lower prices is the simplest type of 'market force'. Such a force comes into existence without any conscious action on the part of the three parties. In modern markets there are millions of parties, and complex market forces. Market-liberals value this characteristic of the market. Their belief in the moral necessity of market forces in the economy is probably the first defining feature of market liberalism. The second is the belief in entrepreneurs themselves, as a good and necessary social group. To summarize:

1- For all liberals, interactive process legitimizes outcome: in market liberalism, the market is the primary process, and market transactions are the interaction.

2- Market liberals believe that economic transactions should take place in a framework which maximises the effect of each transaction on every other transaction. (That is an abstract definition of the free market, but it makes the later transition from liberalism to neoliberalism easier to understand).

3- Liberals see the market as good, and often as semi-sacred. They want the market to be as large as possible, involving all of society. In modern liberal-democratic states almost all adults participate in the market. A private club in a Communist state, where members can hold a closed free market, would satisfy no liberal.

4- Liberals are hostile to economic self-sufficiency - so strongly, that they believed in war to 'open up markets'. The most famous example is the Opium War, when Britain forced the Chinese Empire to allow the import of opium. This liberal belief in market expansionism has revived after the end of the Cold War.

5- Market liberals are hostile to trade barriers: "free trade" is a classic slogan of market liberalism. That meant traditionally, the free flow of goods and capital: neoliberalism later developed a more diffuse version, where 'flow' and 'interaction' are treated as quasi-ethical values.

7- All market liberals are hostile to interference in the market, by church, state or others - although since the 19th century only the state has sufficient power to interfere. Market liberals are clearly anti-utopian, in the sense of opposing economic planning, especially centralized state control of the entire economy. They believe that the market produces the best 'design for society', and that is wrong to substitute any other design.

8- However, market liberalism is itself a utopia, despite its anti-utopianism. In the 'ideal world' of market liberalism, no goods or services exist which are not the product of market forces, but all goods or services which are market-responsive do exist. This is in itself a utopian project, implying a total structuring of society. Neoliberalism goes even further - extending the market principle beyond the production of goods and services.

10- Without the entrepreneur there is no free market, therefore market liberals demand a privileged social status for the entrepreneur. The early liberal theorists were hostile to the urban guild economy of mediaeval Europe: they saw it, in effect, as a conspiracy not to compete. In their historical vision, the entrepreneur rescued Europe from the poverty of the Middle Ages. (This vision was shared by Karl Marx, who admired the cultural dynamism of the free market). Not just mediaeval Europe, but all societies without an entrepreneurial caste, were seen as failures.

A central but rarely explicit political demand of market liberals is therefore, that entrepreneurs should have control of the economy. This has not only been accepted, but has become so incorporated into the culture of western liberal-democratic societies, that few people ever think about it. But it would not be any less logical, to hand the economy to engineers, or priests - or not to privilege any one group. The choice depends on underlying values, and liberals value the entrepreneur. This value preference of liberals, and its widespread acceptance, has created what in the US is called 'the business community'. That is real and identifiable social elite - with specific cultural preferences, specific clothing, and often a specific form of language (sociolect). It does in fact control the economy, in liberal-democratic states. Although this was probably not foreseen by early liberals, market liberalism has become an ideology in support of these elite. Their culture, attitudes, and ethics have greatly influenced neoliberalism.

You may republish and reproduce the content of this webpage, for non-commercial and academic purposes.