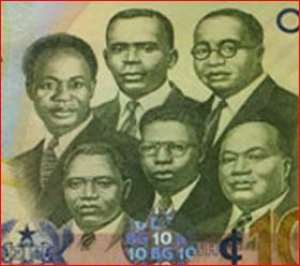 Judging them is acceptable, but bearing in mind all the environment of the 40's and 50's.

They complement each other and we must not look at them as rivals; despite their deep disagreements.

I don't think that Kwame Nkrumah was flawless; I would had disagreed with him in many issues if I were alive at that period. But still, I admire, honor, and respect his personality and values.

You have to name some big institutions after each one of the "Big Six": J. B. Danquah; Kwame Nkrumah, Obetsebi Lamptey, Ako Adjei, Edward Akufo-Addo and William Ofori Attah

Kennedy Agyapong will win NPP’s primaries because of his hon...
17 minutes ago

You disgraced yourselves and the entire country by booing Ak...
24 minutes ago