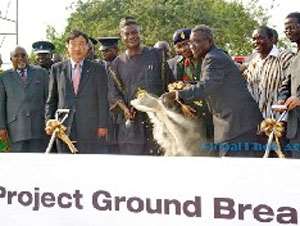 There are conflicting reports as to what transpired on Tuesday at the meeting between feuding partners of STX Engineering and Construction Ghana Limited and Ghana government officials.

The meeting was organised at the instance of the government through the Ministry of Water Resources Works and Housing.

The Works and Housing Committee of Parliament was in attendance to find an amicable solution to the raging impasse that has stalled the construction of 200,000 housing units in the country, starting with 30,000 houses for the security services.

According to sources, government officials met the feuding partners separately on Tuesday even though a presidential committee set up, with Vice President John Mahama as the chairman, had met the partners together on June 1, 2011 and June 7, 2011 to look into the impasse.

Contrary to claims by David Tetteh-Assumeng, NDC MP who chairs the Works and Housing Committee of Parliament that the Ghanaians and Koreans were going to work together on the housing project, the Koreans were said to have insisted that they could only proceed with the project if their decision to fire B.K. Asamoah was respected by the government.

Additionally, the government was said to have expressed worry about the imminent court case between the feuding partners which is most likely to further delay the commencement of the project but the Koreans were not prepared to withdraw the case because B.K. Asamoah had taken them for a ride.

But Mr. Tetteh-Assumeng, the MP for Shai Osudoku, insisted that the initial construction of 30,000 housing units for the security services would be realized and said there should be 'no cause for alarm' because the 'partnership is not over'.

'I am very, very confident, and I want to assure the people of this country that we are all confident and we are making sure that the project succeeds and it will succeed by the grace of God.'

But the Koreans also insist that 'with the legal tussle, we cannot access finance on the international market. We have agreed to find amicable solutions to the problem but have also respectfully indicated to them that we cannot go on with the project with B.K.'

The source said the officials appreciated the Korean's difficulty in securing funding for the project without the sovereign guarantee and also admitted that Mr. Asamoah was wrong in calling the police to the company's premises at the Airport Residential Area when the resolution was made to remove the CEO.

According to the source, when the Koreans raised the issue of the sovereign guarantee, the government officials gave a veiled explanation that it had to be handed over to Mr. Asamoah because he was the CEO.

'STX Korea is not abandoning the project. We are committed to the terms of the agreement and respect everything we are doing with the government of Ghana,' the source added.

At the meeting with the Vice President, both parties were said to have outlined their reasons for taking certain decisions that led to delays in starting the project.

The Housing Minister, Alban Bagbin who had taken over the chairmanship from the Vice President, advised the parties to remain calm because they were not there to apportion blame but to find solutions.

Nana Akomea, NPP MP for Okaikoi South and NPP Director of Communications, has said that the contract should be abrogated with immediate effect because the agreement has been abused.

He said, 'Parliament endorsed the agreement on two key conditions. The first was that the Koreans were to provide the expertise and the second was that the money was supposed to come from an intra fund in Korea…but current events have shown that these have not been done.

'If they seek new partners then the contract should be abrogated because the agreement was signed in the name of STX Korea.'

He advised the government to use Ghanaian expertise and involve the Ghana Real Estate Development Association (GREDA) for the project.

The STX partners have been struggling to raise money for the multi-billion dollars project.

The sovereign guarantee, signed by Finance Minister Dr. Kwabena Duffuor on April 27, 2011, has already been going round several countries in search of cash to start the project.

It has travelled to the United Kingdom, Switzerland, United States and Mexico and was recently sighted in Nigeria where it had been moving from one bank to the other for money.

Copies of the documents to that effect have allegedly been distributed by B.K. Asamoah, the embattled Chief Executive of STX, who is knocking on doors of banks for cash.

The Sovereign Guarantee, with reference number DMD/MWRWH/STX E&C/SG/2011, was issued by the Ministry of Finance and Economic Planning and has Instrument Number MOFEP-SG/ MWRWH-STX/2011/001.