Uganda frees smuggled parrots back into the wild 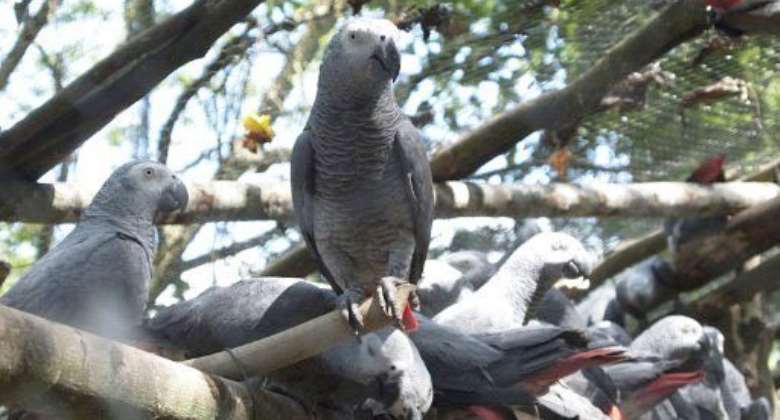 Who's a pretty boy then? African grey parrots in a Uganda Wildlife Authority center today. By MICHELE SIBILONI (AFP)

KAMPALA (AFP) - Ugandan wildlife officials on Thursday released hundreds of rare African parrots back into the wild six months after they were rescued from animal smugglers.

Authorities reintroduced the 200 grey parrots to their natural habitat in the Kibale national park, 350 kilometres (217 miles) west of Kampala, following months of treatment at the country's largest zoo.

"They have been in captivity for so long now that at first they refused to come out ... eventually though they started moving out and flying off," said Lilian Nsubuga, the Uganda Wildlife Authority spokeswoman.

Eight of the parrots were unable to fly because they were either overweight or had damaged wings and would be returned to the zoo, she said.

Nsubuga said that the parrots, which were secretly transported to the park last week in several specially constructed containers, were each tagged with a ring on their beaks and would be monitored by a team of wildlife experts.

Ugandan police discovered around 130 of the birds in January as they were being illegally transported across he country's porous border with Democratic Republic of Congo.

Dozens of the birds later died after tests carried out by wildlife authorities showed that they had been sedated with alcohol-infused sugarcane ahead of the journey.

A second consignment of over 100 undocumented birds was later discovered at a warehouse close to Uganda's main airport in Entebbe following a tip-off.

Wildlife officials said that the birds were likely meant to be smuggled to Europe, America or East Asia, where they can fetch up to $2,000 (1,400 euros) each on the black market.

Trade in African grey parrots is restricted under an international treaty regulating the cross-border trade in endangered species.

Uganda is famed for its rich birdlife with over 1,000 species documented in the country, but officials say that animal smuggling is becoming increasingly big business.

No one has yet been arrested in connection with the seized parrots, wildlife authorities said.