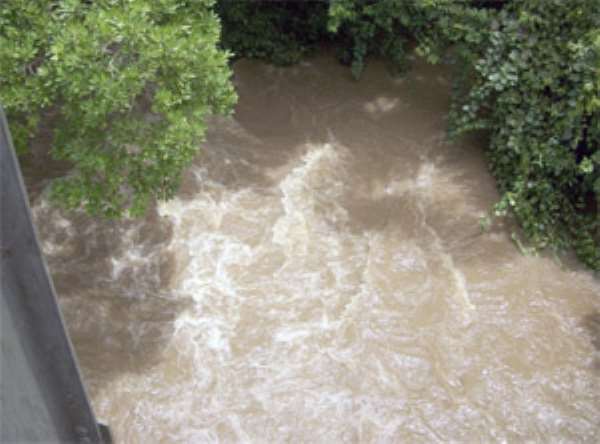 Several people and over 30 communities have been displaced due to heavy rains which caused some rivers in the southern part of the Volta Region to overflow their banks.

Houses have been destroyed while gutters and bridges that are supposed to control the water have been totally submerged.

The affected areas are mostly in the southern part of the Volta Region. They include Klave, Shia and Nyive in the Ho Municipality, Adaklu-Anyigbe, Akatsi, North and South Tongu Districts as well as the Keta Municipality.

Many believe that the flooding was due to heavy rains and the overflowing of River Tordze which emanates from Togo and runs through the southern parts of the region to the ocean.

In the Adaklu Anyigne district, the cause of the flood was attributed to a downpour that started on 17th July 2011.

The downpour lasted for over 12 hours and was followed by subsequent ones until Friday 22nd July 2011.

The rain, coupled with the overflowing of streams and rivers in the three traditional areas- Adaklu, Agortime and Ziope of the Adaklu-Anyigbe District- destroyed farm lands, properties and homes of countless people.

When DAILY GUIDE visited the area, some children, farmers and traders were stranded at the other end of the bridge while vehicles that were conveying traders to the Ho market could not cross. As at last Friday, the main bridge at Kpetoe on the Ho Aflao highway was flooded.

Most of the affected people are putting up with neighbours and relatives and have appealed to NADMO, the general public and other benevolent organizations to come to their aid.

In the Ho Municipality, Nyive, Shia and Klave were affected.

As at last weekend when DAILY GUIDE visited the area, most of the roads had become unmotorable due to the flood.

Vehicles which managed to ply the road from Ho had to stop at Nyive for passengers to commute about two and five kilometers by foot or get a brave and skillful motor rider to get them to Shia and Klave respectively.

The Paramount Chief of Shia, Togbe Dadzawa, told DAILY GUIDE that the abandonment of the Ho-Nyive-Shia-Klave roads had made them unmotorable.

He said if the road were in good shape with drainage system, the rains would not have worsened things to this extent. He therefore called on the District Chief Executive, Isaac Kodobisah, who hails from Klave, the regional minister, Joseph Amenowode and the President to fulfill their promise by constructing the said roads.

The NDC Chairman for Nyive, Michael Akakpo, expressed disappointment in the MCE and the MP for the area, Capt. George Nforjoh, for abandoning the area after the many promises made.

He noted that even though these towns were border towns, the area was not being used since the roads were very bad.

The Volta Regional Minister, Joseph Amenowode, the Minister for Roads and Highways, Joe Gidisu, some engineers and experts from the feeder roads and NADMO respectively are currently touring some affected areas to ascertain the extent of damage and give some relief items to the affected communities.

According to the regional minister, they would visit five towns- Adaklu Anyigbe, South and North Tongu, Akatsi and the Keta Municipality.

He said from his assessment, most of the areas needed urgent attention while drainage systems in some of the areas had to be reconstructed.

The regional NADMO coordinator, Henry Ametefe, disclosed that his outfit was currently providing the affected persons with some relief items such as mats and jerry cans for water while the team from Accra was providing food items.