Muammar Al-Gaddafi, A Race Against Time 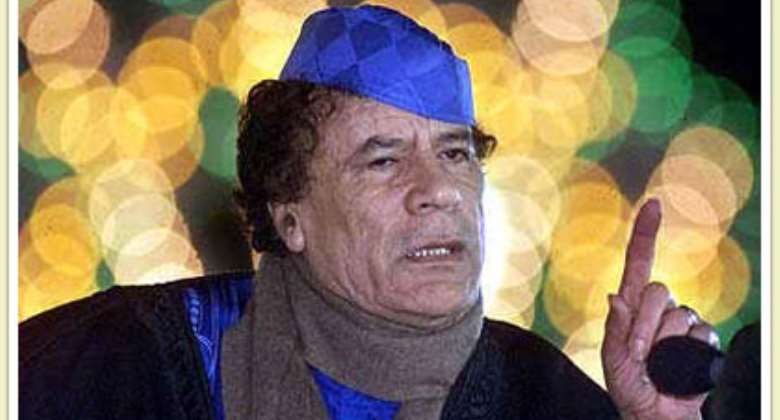 Remnants of African sit-tight dictators will not stop at holding on to power even when the time is up. The on-going Arab revolution would not have come at the right time when citizens are impoverished, dwelling in abject poverty, high unemployment, corruption, lack of freedom of speech, political freedom and poor living conditions. The revolution constituted the most dramatic wave of social and political unrest in the Arab world in recent time and has resulted in scores of deaths and injuries, most of which were the result of action by police and security forces against demonstrators. Disillusionment, dismal social political and economic system while the ruling elites and their families lives in affluence at the detriment of the citizenry who are supposed to be stake holders in the management of the commonwealth.

In Tunisia, the authoritarian regime of former President Zine El Abidine Ben Ali from 1987 to 2011 before he fled following wide-ranging protests. Mohamed Bouazizi, a Tunisian street vendor who set himself on fire on December 17, 2010, in protest of the confiscation of his wares and the humiliation that was inflicted on him by a female municipal official. This act became the catalyst for the Tunisian revolution, sparking deadly demonstrations and riots throughout Tunisia in protest of social and political issues in the country. Anger and violence intensified following Bouazizi's death, leading then-President Zine El Abidine Ben Ali to step down on January 14, 2011, after 23 years in power. Tunisia, an export-oriented country, had suffered corruption benefiting the former president's family. Accusations have been made against the regime, accusing it of becoming a kleptocracywith corrupt members of the regime and the ruling class, controlling much of the business sector in the country.

Mrs. Leïla Ben Ali, former Tunisian first lady, has been described as a shopaholic. Using the 737 Boeing Business Jet of the government to make "unofficial visits" to European fashion capitals, such as Milan, Paris and Geneva. She symbolizes the "greed and ruthlessness” of the presidential family. Rumours have been circulating that Ben Ali's son-in-law Sakher al-Materi was being primed to eventually take over the country, but this never came to fruition. The events began in December 2010 and led to the ousting of longtime dictator, Zine El Abidine Ben Ali on 14 January 2011, after 28 days when he officially resigned after fleeing into exile in Saudi Arabia, ending his 23 years of authoritarian regime. This protests inspired similar actions throughout the Arab world.

In Egypt, the revolution was an intensive campaign of civil resistance, including a series of street demonstrations that took place in major Egyptian cities. The popular revolt started on 25th January 2011 with complaint of cruel use of power by former President Hosni Mubarak, which included police brutality, state of emergency laws, lack of free electionsand freedom of speech uncontrollable corruption, as well as economic issues including high unemployment, food price inflation, and low minimum wages. The aims of the protesters were primarily to end draconian rule of Hosni Mubarak regime, and establish a more responsive government, and have a say in the management of the commonwealth for the good of the people.

On 11 February 2011, the then Vice President, Omar Suleiman announced Mubarak's resignation, entrusting the Supreme Council of Egyptian Armed Forces with the leadership of the country. Mubarak's 30-year reign made him the longest serving President in Egypt's history. It's estimated that the Mubarak family is worth over $70 billion.

Similarly in Libya, the revolt started on 15 February 2011 with series of protests and confrontations by pro-democracy group against the dictatorial regime of a Colonel Muammar Gaddafi's 42-year of mis rule with iron fist and despotic control for a more popular and democratic systems of government.

The protest had escalated into an armed conflict with opposition controlling Benghazi and other cities in much of the eastern part of the country, Gaddafi controlling Tripoli in the west with fighting and casualties fast-approaching the scale of a civil war. Defiant Gaddafi continued with air raid and bombardment of opposition held areas which resulted in the international communities calling for a No-fly-zone over Libya to protect innocent civilians.

The United Nations Security Council Resolution1973 endorsed multinational military intervention against Gaddafi's forces. with the passing of this resolution, it demands an immediate ceasefire and authorized the international community to establish a no-fly zone over Libya and to use all means necessary short of foreign occupation to protect civilians, strengthens the arms embargo and particularly action against mercenaries, by allowing for forcible inspections of ships and planes, imposes a ban on all Libyan-designated flights, imposes an asset freeze on assets owned by the Libyan authorities, and reaffirms that such assets should be used for the benefit of the Libyan people.

Gaddafi has ruled Libya as an autocratsince overthrowing the monarchy in 1969. Gaddafi is the world's longest-ruling non-royal head of state. Huge popular protests in Egypt and Tunisia have toppled entrenched leaders, but Gaddafi said he would not be forced out by the opposition

Hours, weeks or months will tell if he will survive the coalition superior fire –power. It's my fervent hope that, the coalition forces will do same in other despotic Arab states of Yemen, Bahrain, Syria, Saudi Arabia etc were protest are currently on going so as not to be seen as having personal vendetta for Gaddafi over unresolved issues.