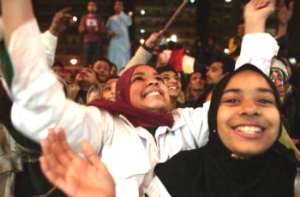 Events of the past fortnight culminating in the turfing out of Hosni Mubarak, the Egyptian president of 30 years should signal an end to an old era of foreign policy objectives by America and other Western countries. It is hoped that the fallout will lead to an examination of why Western governments chose to support undemocratic dictators and call them strategic allies.

There was a time in this sustained uprising when instead of telling Mubarak that the game was up, some Foreign Secretaries notably Hilary Clinton were talking incoherently about the risks of transition. They sounded like they really believed that an 82 year old tyrant they had supported for 30 years who openly wanted his son to succeed him was the only person who could supervise an orderly transfer to democratic rule in Egypt. It was as if their genuine call for Mubarak to go and go now! was not a credible call for change because there was no identifiable successor.

Fortunately she was rescued by Obama who has shown a refreshing astuteness in this crisis and had quietly but truly shown himself as a democrat who respects the will of the people. We hope that this can be sustained in the new realignment of western foreign policy and that Obama will increasingly override the usual discredit policies of his state department.

Most were wrong-footed that it took only four days to get Tunisia's President Zine al-Abidine Ben Ali out of office and there were times when the foreign affairs pundits were hoping the uprising would run out of steam and the people might just get tired and go home and then Mubarak who was clutching on to power at all costs would remain untilSeptember.

This was wishful thinking because once the people speak you need to listen to them. This was different, this was not like a western protest, like how Tony Blair refused to listen to the will of the people despite the largest mass rally against the war and took Britain to war. This was a different moment, the people were not going away anywhere until the dictator had gone and they demonstrated that the interests of the politicians should not be above the will of the people.

A year and a half ago president Obama stood in the parliament of Ghana and threw a challenge to the people of Ghana and Africa on democracy; he spoke about how America was intent on promoting democracy in the world, good governance that he felt was directly related to economic growth. I am reminded of this from his speech: “As I said in Cairo, each nation gives life to democracy in its own way, and in line with its own traditions. But history offers a clear verdict: Governments that respect the will of their own people, that govern by consent and not coercion, are more prosperous, they are more stable, and more successful than governments that do not”. Read more:

Although Obama has been consistent in his call for democracy and has acknowledged the differences in how people temper their democracy with their traditions, he must now start re-examining the role of his strategic allies and whether or not they actually add any value to stability in the world. It is only by so doing that they might find a sustainable and resilient solution to the problems of the Middle East and in Africa.

The shame of the old foreign policy is that there have been too many dictators who have been beneficiaries of support much against the grain of rationality. Bokassa and Mobutu come to mind as dictators who were supported by western interests much against the will of the people and as soon as the people found the spirit and power to turf them out, the countries almost crumbled.

In the past America and the West have also deliberately intervened in countries that promoted ideologies that America detested; so they helped overthrow, Lumumba of Congo, Nkrumah of Ghana and Allende of Chile with disastrous economic consequences that set those countries back several years. But now that the porous nature of those policy objectives have been exposed, the need to explore other veritable methods of achieving stability in troubled regions has become vital.

What must America and the West do next? It must start by adopting a principled approach to foreign policy; this means that it must relearn the lessons of Iran – that you cannot keep a tyrant in office for too long and that buying time for the tyrant results in anti American feels the longer the protests remain unresolved as happened in Iran when instead of listening the calls of the people for reformed they assisted the shah to brutalise his people by sending soldiers to the holy city of Qom to repress the protests. In Iran the Americans lost an opportunity to work with the people and as the protests grew, the ayatollahs filled the breach and the shah had to leave – so, no orderly transfer of power could be implemented. Learning these lessons however may be difficult given the lazy but convenient foreign policy actions of the past. The search for a new paradigm must extend to investigating how ways in which security and stability can be balanced to be congruent with democracy; already foreign policy experts are complaining that democracy may not be a good thing after all in Egypt if it returns a government that is hostile to Israel.

Democracy must be encouraged everywhere, even if there has been past misunderstandings with those governments. America must learn to constructive engagement with Hamas and Hezbollah who are the governments in Gaza and Lebanon, it must support the movements and call that will inevitably start in Saudi Arabia, Yemen and Jordan. The European Union must seek to engage positively with turkey. The West needs to re-evaluate its relationship with Muslim countries and help them towards democracy. This move will bring more stability than the support of tyrants who repress their people whilst serving the interests of the America and not the will of the people.

The courage of the Egyptians that played out on our TV screens day in and day out has shown to the whole world that there is a new order in the world and America and the West's relationship with the world must be shaped more by the will of the people than by the interests of America, because it is only when America encourages leaders it supports to implement democracy in their countries that there will be true stability. Though the challenges will be many, and deft negotiations are required to resolve how to make the objectives of the west with the will of the people congruent.

We know that this will not happen every time but the approach should be one of listening and balance. It is true that Obama has handled this well but will he still deliver on the promise he made in Ghana in July 2009 and his new promise to work and support the people of Egypt through this painful but euphoric transition to their new found freedom from American supported tyranny.

Change has come to Egypt and with it an opportunity for a more principled approach to foreign policy.

Ade Sawyerr is partner in the diversity and equality focussed consultancy, Equinox Consulting.

Originating at egypt: change has comewww.obv.org.uk