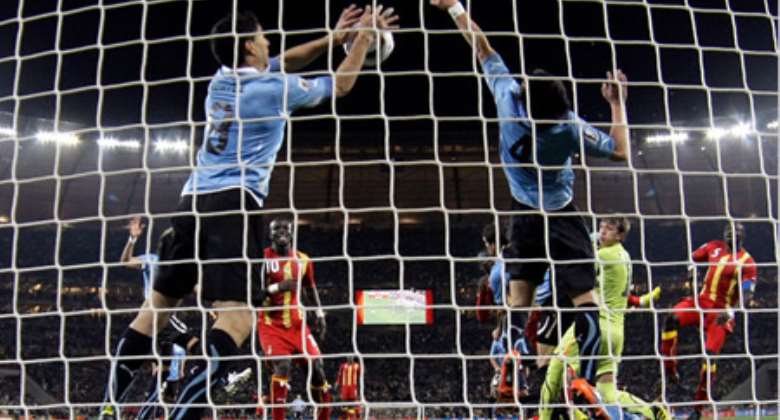 We have all agonized endlessly about how the Black Stars did the improbable at Soccer City Stadium in Johannesburg a few days ago. They snatched defeat from the jaws of victory, leaving a billion or more people emotionally stranded as the World Cup progressed from the final 8 to the final 4. Some have blocked the whole debacle out of their minds and say “what match?” when you bring it up. Others have re-watched the recording of the game more than 10 times already, as if the game would change magically on review and Asamoah Gyan's 120th minute penalty would magically go lower by 6 inches. After all, the goalkeeper—Fernando Muslera of Uruguay—had already been displaced.

There is some value in the masochism of watching the match again. A number of observations have emerged from critical football fans who are trying to make sense of a very traumatic and painful event, which will wake many grown men at night from their sleep. They will wake up in a cold seat with their hearts pounding in their chests wondering if the ball really did go over the bar. In announcing that Uruguay (Yes, I mentioned the name) would be meeting the Netherlands, an ESPN analyst observed sadly that Ghana belonged in the semi – finals because they were not beaten by Uruguay. He said the Black Stars had “a meltdown!”

I am one of those who took the position right from the beginning that judging by skill, strategy and other technical aspects of the game, the Black Stars could lift the cup. I however cautioned that psychological preparedness and discipline were critical in ensuring victory. In the end, we were eliminated, not by the hand of Suarez on the goal line but by a lack of the necessary psychological resilience to make it to the next stage. The whole tournament is a based on psychological warfare and this is where games are won. For a while the psychological “home” advantage the Black Stars fed off, nurtured them along.

Unfortunately, the transformation from the Black Stars of Ghana to the Black Stars of Africa required additional psychological preparation as the young team took on the dreams, hopes and desires of over one billion people instead of the 24 million they were originally playing for. At the moment the Suarez handball took place, had Asamoah Gyan been properly psychologically prepared, he would have taken just a few more seconds to calm himself down, using already discussed strategies and placed it in the net in a cold and calculated way. Instead, he was all fired up on adrenaline, increasing the chances of an error which has now become a painful part of World Cup history. A friend observed: “When you are sent to kill the king, you cannot fail or the king will kill you.”

As the penalty shootout loomed, anxiety rose exponentially for the fans because the whole situation was akin to a decapitated Uruguayan rooster which was refusing to die and was thrashing around. The soup was ready but the feathered bird was refusing to die! They had been completely outplayed but Suarez was well within the rules to do what he did. He gambled for his country and won. Asamoah Gyan had an opportunity to complete the meal but failed because he was psychologically burdened and erred as a result.

During the shootout, friendly observers and friends of the Black Stars were dismayed by what appeared to be an absence of preparedness for this eventuality. Instead of a clear strategy, rolled out with confidence, we succumbed to plaintive prayer, suggesting that we were expecting Him to send down “his mighty power” instead of seizing the moment firmly, confidently and decisively. Asamoah Gyan, to his credit showed great courage in returning to take the first one. Stephen Appiah kept up the pace but John Mensah, standing just a few paces behind the ball made my stomach turn. Penalties are successful on a combination of power, accuracy and velocity. He sacrificed velocity for accuracy and the meltdown began. The team did not have 5 players who could confidently take penalties? The Uruguay goalkeeper knew from Mensah's body language that the incoming kick was catchable. It is psychological war fare and players have to be properly prepared.

Now let's turn to our goalkeeper Kingston. He had saved the day so many times but when it came to the spot kicks, his anxiety was palpable. He was so jittery on the line. He seemed to have no plan. He dove to the right each time. This was too elementary an approach. If I could see it, so could the Uruguyans. He was clearly not well prepared either in mind or in spirit. Do we have a Goalkeeping coach?

The Black Stars deserve a hero's welcome. The word I see in reports is “Gallant”. They played with determination, zeal and later, they were truly inspired but I am still left wondering if they believed as we did that they could have won the FIFA trophy. The Black Stars have returned Ghana to football glory and deserve every accolade and reward. The team is still young and with better psychological preparation for the future, we will indeed lift the FIFA trophy in Brazil in 4 years. The Black Stars have got to believe because we believe they can achieve the ultimate!