Let Us All Blow Our Vuvuzela’s. Blow My African Brothers And Sisters. 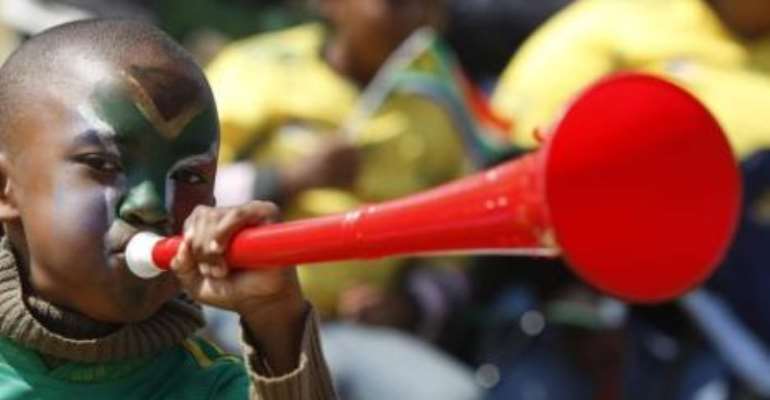 The world cup tournament is here and after 70 years of its inception. It is now time for Africa to host the world. South Africa's hosting of this international soccer fiesta did not come to them on a silver platter. Thanks to personalities like Nelson Mandela, Sepp Blatter and a few others who believe in the African, The hosting of the world cup in Africa was met with stiff opposition from some nations. The reason for their opposition was their perception about Africa. For quite some time now, South Africa has been in the news for the wrong reasons. Most Pessimists thought it was not a safe place to host such a big event the high crime rate coupled with xenophobic tendencies, the high prevalence rate of HIV/AIDS and lack of security were some of the reasons that the cynics alluded to.

The support and prayers of the rest of the African continent and some few friends in the other continent saw South Africa through and the rest is history now. Days before the opening ceremony, some skeptics were still not comfortable with this soccer fiesta taking place in Africa. The musical show and grand opening ceremony which was witnessed by some African leaders and a host of other dignitaries left a lasting impression on the world. It also put the critics to sleep and made Africa's case of hosting the world a dream come true. Our brothers and sisters from South Africa have shown the rest of the world what they are made of. The performances at the opening ceremony were excellent and the entire programme was a grand success.The only blot on the entire program was the death of a great grand daughter of the Madiba man Nelson Mandela. The unfortunate death of the 13 year old girl made it impossible for one of the best leaders that Africa has had after Dr. Kwame Nkrumah to witness what he and others manage to make happen. May the soul of that little girl rest in peace. I am sure just us his Great Grand pa sacrificed his life for the end of Apartheid in South Africa, so did she lost her life to make the dream of South Africa and Africa has a whole come true. Its very unfortunate a life was lost in the quest to make it happen in Africa. I hope the rest of the world learns a lesson from this tragedy and ensure that even in our quest to celebrate our success in any endeavour we do not over do it or engage in certain acts that makes us to endure pain and sad memories for the rest of our lives.

The level of infrastructural development in South Africa coupled with the beautiful stadia that has been built for this tournament has proven to the whole world that with a little push and determination, the African can achieve results. The tournament has started and everything seems to be moving on according to plan, although there have been some few challenges here and there.

One thing that has made this tournament unique and African is the use of the Vuvuzela's. This musical instrument which was introduced by South Africa to the tournament has generated a lot of controversy amongst the various stakeholders (players, coaches, commentators, referees and spectators). There have been campaigns by some few people for the “vuvu's to be banned at the stadium. The argument people are making for its ban is the incessant noise that people are alleging it makes. According to the proponents for the ban, the “vuvu”' makes a lot of noise drowning the referee's whistle and making it difficult for the players to hear; others also claim the noise makes it impossible for them to listen to commentary on television. Some spectators also claim their colleague supporters disturb them when blowing the vuvuzela.

These supporters might have a point but I strongly disagree with them. In the first place, what is the most ubiquitous thing that we can use to remember South Africa 2010? Is it the goals? The wonderful display of talents? The stadia? The warmth and wonderful reception of our brothers and sisters from South Africa or the date that the tournament started? All these are worth remembering but to me the vuvuzela's is what I see as the trademark for the host of the world cup in Africa. Everything on this earth has its negative and positive sides and so is the vuvuzela's. The argument that it drowns the whistle of the referees is neither here nor there, we have watched matches where the supporters have been quiet and orderly and yet still players kick the ball after the referee has whistle for an infringement. For those who think the vuvuzela's make it difficult for them to listen to commentary, my question to them is? Can't we find other ways of insulating the noise from this musical piece from getting to listeners? If as people we have managed to manufacture many great things which have made life comfortable for us, what makes it so difficult for us to find a better way of giving commentary without the sound from the vuvuzela's? For the supporters who are complaining that the vuvuzela's make a whole lot of noise, my advice to them is they should tolerate the “noise” for the ninety or so minutes that the match is been played. That is what adds to the fun and interest that the game brings along. Before the invent of these vuvuzela's, a lot of spectators use whistles and shouting to cheer their supporters on and so what difference does it make to have the vuvuzela's taking over?

The organization of the world cup comes with a lot of opportunities for businesses, with the current economic recession and the high rate of unemployment in the system, the vuvuzela's have not only created jobs for some thousands of people in South Africa and the rest of the world. It has also made the whole world to know what Africa can add to such occasions and events. The world cup has been organized in the African style and so be it. The Vuvuzela's have come to stay and we Africans would blow from the beginning of the world cup till the last whistle after the final match. Even after the last whistle, Africans would still have it to show to the world and to generations unborn. I urge other countries to be creative and see what they can also add to the world cup tournament anytime it is their turn to do so.