M&J probe: Court's ruling against CHRAJ is a travesty of justice 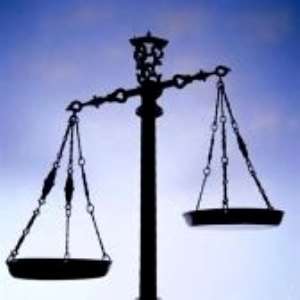 An Accra-based legal practitioner, Lawyer Kwame Gyan says the Human Rights Court in Accra has erred in its ruling barring the Commission for Human Rights and Administrative Justice, (CHRAJ) from investigating the M&J bribery scandal.

He said the ruling “is a travesty of justice.”
The court on Friday upheld arguments by lawyers of some six persons - Messrs Kwame Peprah, Alhaji Baba Kamara, Alhaji Boniface Abubakar Saddique, Alhaji Amadu Seidu, Brigadier-General Lord Attivor and Dr Ato Quarshie - that the CHRAJ Commissioner had, in a television interview made conclusive pronouncements that amounted to prejudging their clients case.

CHRAJ opened public hearings - plagued by persistent objections - into the allegations that some former government officials received monies from the UK construction firm, Mabey and Johnson.

Lawyers of six of the accused raised objections, challenging the jurisdiction of the commission to investigate the matter.

They eventually went to court arguing that the Commissioner of CHRAJ, Justice Emile Short who presided over the hearings had made prejudicial comments against their clients in a television interview.

The court thus barred the CHRAJ Commissioner and the Commission from continuing with the public hearings opened into the case, saying the CHRAJ boss' comments on Metro TV were prejudicial.

But Mr Kwame Gyan, counsel for Dr George Sipa-Yankey, one of the persons accused of allegedly receiving bribes from the UK construction firm to influence the award of contracts to the company says he disagrees with view of the court.

Mr Gyan, whose client was not a party to the motion seeking an order of prohibition against the Commission on Human Rights and Administrative Justice, said Justice Short did not say anything in that interview that could be judged to be prejudicial.

“I listened, live, to that interview between Commissioner Short and Paul Adom Ochere – [host of the Good Evening Ghana programme on Metro TV] – and I am convinced that he did not say anything which is prejudicial. In my opinion, what he [Commissioner Short] did [granting the interview] was not good exercise of discretion. I think he committed a grave error of judgement by granting that interview in the first place. But I don't think the contents of the interview, specifically what Commissioner Short said is of that standard required by the law to ground a determination that he was prejudicial.”

Mr Kwame Gyan was particularly unhappy that the court in its ruling prohibited not only the CHRAJ boss but the institution itself from investigating the matter.

He contended that the court should have barred Justice Short from presiding over the hearings, leaving the Commission to perform its constitutionally mandated task of investigating allegations of corruption.

Mr Gyan filed an application seeking an order of mandamus at the court to compel the Commission to hear his client, Dr Sipa-Yankey when CHRAJ suspended hearing pending a determination of the motion filed by the six other persons.

He told Joy FM's Kofi Ansah he may consider filing an application to join the case and therefore appeal against the ruling of the court.

“I think that when we have the opportunity of interpreting law, we should also keep a little bit of open-mindedness. I think this ruling [is] a disservice to the work of CHRAJ,” he stated.

He told Joy FM, “I am disturbed by that ruling because if you combine this ruling with the unfortunate ruling with respect to the [Richard] Anane case, it does raise questions about the commitment of the judiciary of Ghana to the fight against corruption and the quest for probity and accountability in our country.”

He said the courts' decisions tie the hands of the Commission which is already working under very difficult arrangements and conditions.

Prof. Boadi expressed the hope that CHRAJ will appeal against the decision and pursue the case to its logical conclusion before “they give up if they must give up at all.”

Play the attached audio and listen to excerpts of the interviews with Mr Kwame Gyan and Prof. Gyimah Boadi.

‘Dormaahene’ promises NPP acre of land in Sunyani in honour ...
25 minutes ago