THE MEANING OF EASTER 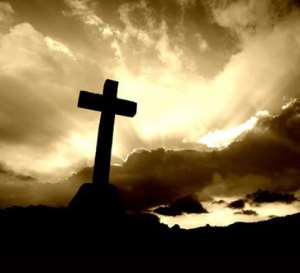 There is a lot of controversy about the genesis and the significance of Easter. There are those who see the celebration of Easter as an error of the mortal mind. I do not to become participant in this debate.

I want to write about a certain man briefly and I am sure you will know who I am talking about as I go on. He was born in an obscure village, the child of a poor peasant woman. He grew up in still another obscure village, where he worked as a carpenter until he was thirty years old. Then for three years, he got on his feet, and he was an itinerant preacher. And he went about doing great things. He didn't have much. He never wrote a book. He never held an office. He never had a family. He never owned a house. He never went to university. He never visited a big city like modern day New York, London or Tokyo. He never went two hundred miles from where he was born. He did none of the usual things that the world would associate with greatness. He had no credentials but himself.

He was only thirty-three when the tide of public opinion turned against him. They called him a rabble-rouser. They called him a troublemaker. They said he was an agitator. And so he was turned over to his enemies and went through the mockery of a trial. And the irony of it all is that his friends turned him over to them. One of his closest friends denied him. Another of his friends turned him over to his enemies. And while he was dying, the people who killed him gambled for his clothing, the only possession that he had in the world. When he was dead he was buried in a borrowed tomb, through the pity of a friend.

Nineteen centuries have come and gone and today he stands as the most influential figure that ever entered human history. All of the armies that ever marched, all the navies that ever sailed, all the parliaments that ever sat, and all the kings that ever reigned put together have not affected the life of man on this earth as much as that one solitary life. His name may be a familiar one.

What is so special about this man whose name has become such a dominant feature in everyday conversation? He came to split history in to BC and AD such that the reign of Caesar is dated after him. His name is Jesus Christ.

It has been more than two thousand years ago since the carpenter's son who walked on the dusty roads of Jerusalem as an itinerant preacher was hanged between two notorious criminals that night on Golgotha. The Greek New Testament recorded that after three days in the grave he was raised up from his dead.

Christians all over the world since time immemorial have been celebrating Easter to mark death and resurrection of Christ Jesus. Tomorrow is Good Friday. Why call it a Good Friday but not a bad Friday. Easter means a lot more than an ordinary event which falls on the Christian calendar.

WHY DID GOD SEND HIS SON TO DIE?
John 3:16 records that ' for God so loved the world that he gave his only begotten son and whosoever believes in him should not perish but have an everlasting life”. In other words he came to set mankind free from the dominion of sin and to bring the fractured relationship between the mortal man and immortal God.

So God sending his only begotten son to die once and for all such that the walls of hostility that has existed between God and men be broken. He did it for once to save mankind from sin.

But the question still remains why still sin remains in every level of human existence. With people killing each other, armed robbery, rape, corruption and war I think it is not bad when a questioning mind asks the question. Salvation has come to the world. It is however available to only those who believe in the Name of Jesus Christ as the Lord.

God's cheque has cleansed the sins of countless people who believed and the same blood that was shared on the cross can clear, cleanse your sins and draw you to God is still available. Like a cheque that has been written for you until you present it to the counter it does not become of any use to the bearer.

The death and the resurrection of Jesus Christ affirm the belief that beyond death is life. Death is not the end of life. If we die we will one rise up to stand before the immortal God for judgment.

The Bible says that name of Christ has been exalted and by mentioning of the name every evil, sickness, problem or mountain is moved away. Using that name, Peter and John healed a lame man.

Andrea Crouch, the American gospel singer sings 'the blood that was shed on the cross will never loose its power. It reaches to the highest mountain and flows to the lowest valley.'

The death of Jesus Christ tells us how much God loved mankind. Of the two criminals who were hanged alongside with Jesus Christ, one of them cried for forgiveness. Jesus responded 'I say unto you that you will be with me in paradise'. This tells us that the forgiveness cheque of God is still deposited in Bank of Eternity. Irrespective of one's sins and if we can come to our senses like the prodigal son the arms of God is waiting to welcome anyone who has gone way ward or wild.

The greatest of all virtues is love. Here we find the true meaning of the Christian faith and of the cross. Calvary is a telescope through which we look into the long vista of eternity and see the love of God breaking into time. Out of the hugeness of his generosity, God allowed his only-begotten Son to die that we might live. By uniting yourselves with Christ then you will be able to matriculate into the University of Eternal Life.

Appiah Kusi Adomako is an international freelance and speech writer, and the president of Ghana Chapter of Leaders of Tomorrow Foundation. He can be contacted through: e-mail; [email protected],