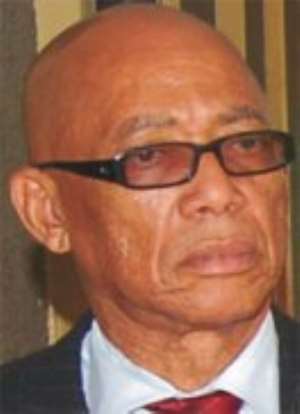 A Legal practitioner, Nana Ato Dadzie, has raised issues over the decision of the Commission on Human Rights and Administrative Justice (CHRAJ) to institute an open inquiry into the Mabey & Johnson (M&J) scandal.

Nana Dadzie, who is also a solicitor and counsel for Dr Ato Quashie, one of the persons mentioned in the M&J case, in a letter to CHRAJ, was of the opinion that the Commission ought not to be stampeded into an open inquiry in the M&J case when the very documents which formed the basis of the said allegations raised against the officials were unavailable or inadequate, as the Commissioner of CHRAJ, Mr Justice Emile Short himself stated recently.

According to Nana Dadzie, CHRAJ’s insistence on the probe would amount to double standards when, in February 2010, Mr Short had made a public pronouncement that CHRAJ “is unable to proceed with the M&J allegation probe because it has not received all the documentation on the allegations it seeks to investigate”.

He further stated that after reviewing the certified copy of the Regina vrs Mabey and Johnson case decided by the Southwark Crown Court dated 25/9/09, Suit No T20097513 forwarded to the solicitors by CHRAJ, he and his colleagues who constituted the defence counsel could not but agree with CHRAJ that “the said document cannot form the basis without more of any credible allegations for which a competent constitutional, legal and juridical body like CHRAJ would want to subject our client to any form of public enquiry”.

“Like CHRAJ, our client does not have access to all the documents which form the basis for the said allegations. Our client is not expected to respond to the allegations the basis of which is uncertain and which he has no access to,” he added.

He further stated that “a cursory reading of the judgement of the Southwark Crown Court referred to various other documents, material and private arrangements which went on between Mabey and Johnson and the SFO (UK), matters which were neither brought before the court nor seen by their clients”.

Nana Dadzie further stated that “the SFO, at Paragraph 194 of the “Prosecution Opening Note” to the Southwark Crown Court, stated with emphasis that the SFO decided not to mention the names of certain directors, executives and employees of M&J at this stage because they may face trial in English courts”.

He said the SFO further stated that “the fact of the naming of certain directors, executives, employees of M&J and any others should not be taken by this court, the public and press as determinative of guilt of any of the persons named in this opening note. In the interest of fairness to those who are under investigation, no settled view concerning the culpability of individuals, whether named here or not, has been made”.

“If investigations are yet to be concluded concerning a number of unnamed and unidentified individuals allegedly involved in the case, then who are the alleged accusers of our clients for which a public inquiry is being held here in Ghana,” he asked.

Nana Dadzie claimed that the officials were never charged nor called as witnesses, nor were they party in the Southwark Crown Court trial, yet the English judge appeared to have admitted as fact allegations assumed against the Ghanaian officials by persons (new directors of M&J) whom they had never seen, met nor dealt with and whose alleged admissions in court their clients never had the opportunity to challenge nor test.

Strangely enough, he said, the former directors who were in office at all material times had not been charged, prosecuted or given evidence in any case in which their clients were mentioned.

Nana Dadzie was of the firm belief that the judgement of the Southwark Court was of doubtful constitutional, legal and evidentiary value under Ghana’s criminal jurisprudence and a gross violation of all known natural laws, more especially their client’s right to a hearing before being condemned, as happened in the Southwark Crown Court Case.

“I wish to state that my clients cannot be part of the projected public inquiry when they, like CHRAJ itself, have no access to documents and records in this case, in spite of various unsuccessful public and private overtures by CHRAJ to relevant public bodies and individuals in the UK and Ghana ‘fishing’ for some evidence,” he said.

He threatened that their clients might have no choice under the circumstance but apply for a restraining order against CHRAJ from competent legal authorities in the event that the appeal by their clients to the law and the Constitution of Ghana was not acceded to by CHRAJ.

For the avoidance of doubt, Nana Dadzie added that their clients re-affirmed their earlier denial that they ever received any bribe whatsoever from M&J or any other company or individual to influence any decision they took in their former public office.

Meanwhile, a former National Chairman of the National Democratic Congress (NDC), Dr Obed Yao Asamoah, commenting on the issue, has accused Mr John Hardy, an international prosecutor, who was in the country recently, of pre-judging the case.

According to Dr Asamoah, Mr Hardy’s conduct fell below the expectation of a legal professional.

“Some persons are expected to appear before CHRAJ; Hardy was here to pronounce the affected persons guilty. That was not proper,” he said.