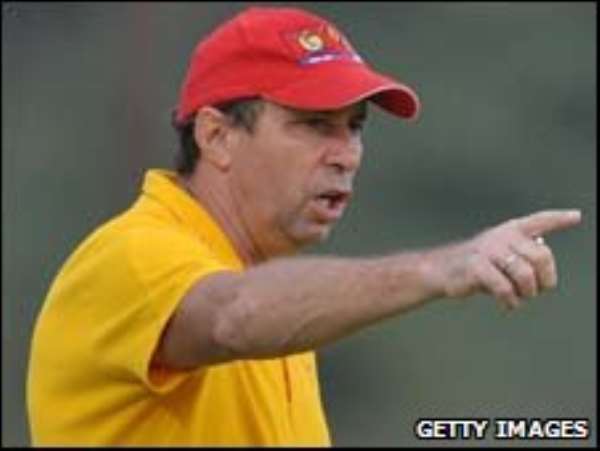 Football greats Pele and Franz Beckenbauer have both backed Ghana and other African sides to prosper at this summer's World Cup in South Africa, when the tournament visits the continent for the very first time.

His prediction proved wide of the mark but he expects the continent's leading lights to fare well on home soil.

“It's difficult to say what will happen this year, but maybe we will see a surprise,” he said.

“The African teams have tough groups but if they qualify for the knockout stage, there'll certainly be a surprise."

Beckenbauer captained hosts West Germany to the trophy in 1974 and he echoed Pele's optimistic assessment of the African sides' chances.

“I'm confident that an African team can reach the semi-finals,”

Beckenbauer said. “Ghana are strong, Ivory Coast are strong and the South Africans have home advantage."

Ivory Coast landed themselves in arguably the toughest group of all the African teams and must compete with pre-tournament favourites Brazil, Portugal and North Korea for a place in the knockout phase.

Ghana were drawn alongside Germany, Serbia and Australia in a tight Group D, while Cameroon will face the Netherlands, Denmark and Japan in Group E.

Roger Milla captured the hearts of football fans worldwide with his exploits for Cameroon at the 1990 World Cup in Italy and he views the decision to award this summer's tournament to South Africa as a victory in itself.

“In Africa, we are so happy to have received this World Cup —

"we could not believe we would get it,” he said.
“Every time I come to Zurich, I thank (FIFA) president (Sepp) Blatter for that."

“To have South Africa hosting the 2010 FIFA World Cup is not only very good for football, but also for the whole African continent."

Nigeria and Algeria are the other African sides to have qualified for the quadrennial showpiece.

Algeria face England, USA and Slovenia in Group C, while Nigeria will meet Greece, South Korea and Diego Maradona's Argentina in Group B.