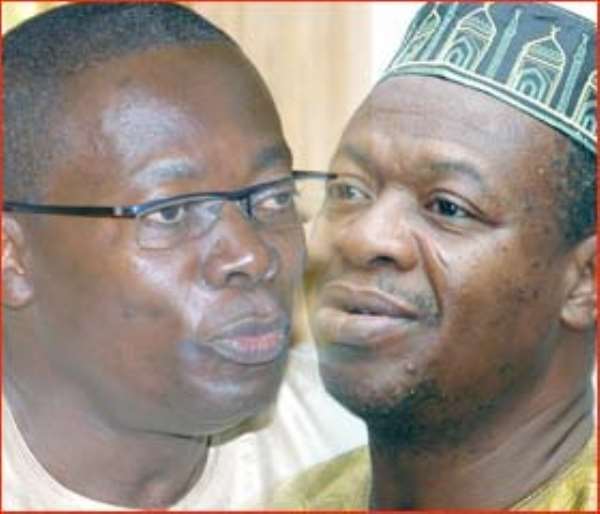 The Commission on Human Rights and Administrative Justice (CHRAJ) has now announced that it is putting its acts together to begin full-scale investigations into the historic Mabey and Johnson (M&J) bribery saga.

A press release dated 8th February 2010, issued in Accra yesterday and signed by CHRAJ Commissioner, Francis Emile Short, said formal hearing into the allegations made against the officials would commence as soon as the anti-corruption body receives documents it requested from the British Serious Fraud Office (SFO-UK).

National Democratic Congress (NDC) kingpins were caught neck-deep in the bribery scandal that led to the resignation of ministers and senior officials of the Mills government.

According to the release, even though the Commission had considered initiating investigations into the allegations, its eventual decision was largely provoked by a petition from the Coalition for Democratic Forces (CDF) and a request by President Atta Mills.

“Even if the Commission had not decided to commence the investigation on its own initiative, two other significant events occurred between 7th and 15th October, 2009.

First, by a letter dated 12th October, 2009, the Coalition for Democratic Forces appealed to the commission to investigate the circumstances in which M&J won its contracts.

“Second, by a letter dated 13th October, the Secretary to the President communicated to the Commission to undertake a thorough investigation into the matter”.

CHRAJ said upon studying the transcript proceedings during the sentence hearing and the SFO's opening note on the M&J case, the commission observed they were not exhaustive enough, and hence the need for deeper investigations, but it was not until in November that the affected people responded.

“For one reason or the other, there were initial delays by the former public officials in furnishing the Commission with their comments. It was not until 30th November, 2009 that the commission received comments from all seven persons in the case.”

It would be recalled that in January 2007, one Jonathan Danos, a former employee of M&J in Jamaica, claimed it was common practice for the company to bribe government officials in order to secure contracts, disclosing that Ghana and other countries were guilty of the offence.

The case was taken to the SFO and in the course of hearing, the seven Ghanaian officials were named as bribe recipients during M&J operations in the 1990s.

During the trial of the case in a UK court, there were confessions by officials of the construction firm to the effect that various sums of money were paid to some public officials in some African countries including Ghana, to influence the award of contracts for the company's benefit.

The officials told the court that they doled out various sums of moneys to persons who either were in government, or had the connections to influence decision makers to help the company win contracts in the country.

President Mills, who had at the time of the revelation just returned from a hectic 10-day trip to the US, Venezuela and Britain, was slapped in the face with the stinking development, and he reportedly gave those in his government the hard option of resigning or getting booted out.

Before then the Attorney-General, Betty Mould Iddrisu, was also dispatched to London for details of the case.

On her return, the ministers in Mills Administration were dropped, but CHRAJ had already been petitioned to look into the matter.

Spokesperson for CDF, Yaw Asamoah, later described the A-G's trip as a waste of the tax payer's money.

“There is conflict of interest. Before the Attorney General even travels to the UK, they had come out to say that all the allegations are not true.

No Ghanaian would believe what comes out of it should it go out that these people are declared innocent. It is therefore a waste of the nation's resources,” he said.

M&J won contracts worth close to £27 million in Ghana at the time but it is not clear what percentage of the amount went into bribes, including alleged payments to support the NDC campaign in 2000 in which Mills was the party's candidate.

Anlo Traditional Area to organise another funeral for Rawlin...
49 minutes ago