POLICE IN GUN BATTLE OVER`WEE` MONEY ``I`ll kill you, this place is not your jurisdiction`` 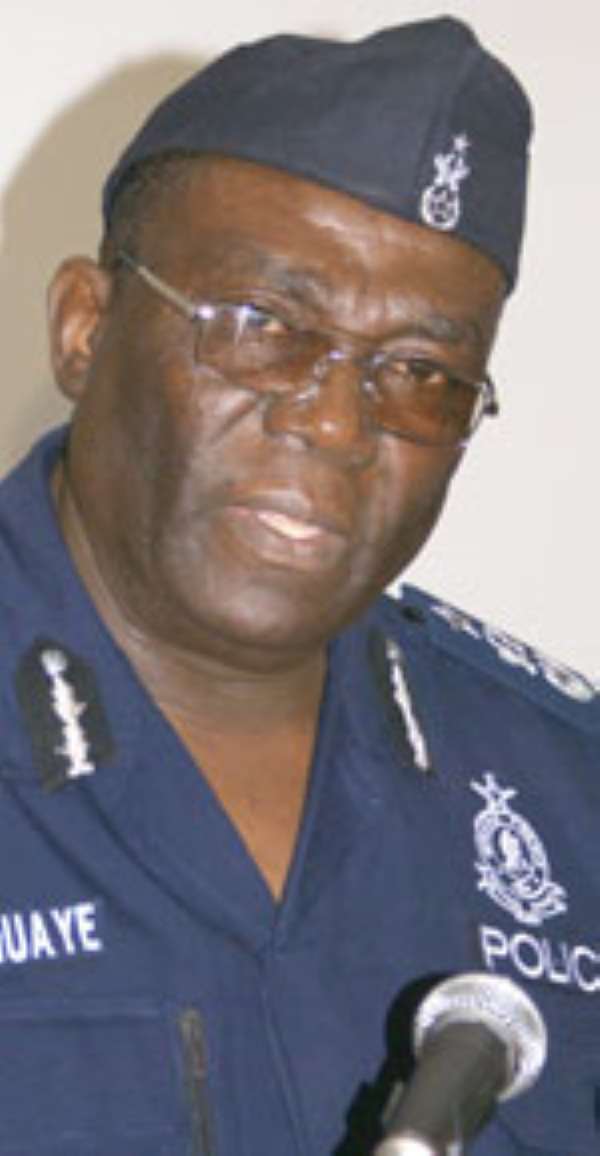 Drama unfolded last Wednesday February 3, 2010 at Ehiamenkyene, a farming community near Begoro in the Fanteakwa District of the Eastern Region, when two police officers, who were fighting over bribe money taken from indian hemp peddlers, cocked their A-K 47 assault rifles ready to fire at each other. It all began when Chief Inspector Twumasi Ankrah, of the District Police Command at Begoro, had a tip-off that police officers, led by Inspector Ofosu Essel, Station Officer (SO) at Ehiamenkyene, had intercepted a KIA truck with a registration number GE9402W, fully loaded with dry leaves suspected to be indian hemp, popularly known in Ghana as “wee”.

This reporter gathered that Inspector Essel allegedly demanded GH¢4,000 from the drug barons to allow them escape with the substance, but his 'customers' who have been in the business for sometime now, opted to offer GH¢3,000.

One of police officers, who realised that what his boss was doing was illegal, relayed the information to the District Police Command at Begoro, about the activities of Inspector Essel. Upon the receipt of the information, Chief Inspect Ankrah and two junior officers were immediately dispatched to the scene.

The decision however incurred the displeasure of Inspector Essel, who immediately cocked his assault rifle upon seeing his senior officer, for invading his 'territory'.

The Chronicle gathered that Chief Inspector Ankrah exhibited good professional conduct by pleading with his junior colleague not to fire at him, because he was there not to fight, but to support him carry out the operation.

The DCE, who confirmed the story when this reporter contacted him, said Chief Inspector Ankrah escaped death through God's intervention.

According to him, he was at home around 8:30 p.m. on the day in question, when he received a phone call from the District Police Commander (DPC) about the incident.

According to him, when they moved to scene, they saw an empty KIA truck parked behind the police station, and when they enquired from Essel the whereabouts of the illegal drug, he denied having intercepted any truck loaded with 'wee'.

Inspector Essel later confessed to arresting the truck loaded with 'wee,' but said the occupants quickly offloaded the substance and ran away.

This was after the team, led by the DCE and the District Commander, had spotted some sacks filled with substances suspected to be indian hemp in one of the rooms of the police station.

DCE Abass Fuseini Sbaab further told The Chronicle that when they arrived at the scene, they were told that Essel was allegedly demanding GH¢4,000 from the suspects, who are presently on run.

The Public Relations Office (PRO) of the Regional Police Command also confirmed the story that the police intercepted 77 maxi bags of dry leaves suspected to be Indian hemp, but denied knowledge about any officer pulling a gun, and threatening to shoot at his colleagues.

Narrating the circumstances that led to the interception, which is in sharp contradiction to the DCE's, Corporal Gideon Boateng, the PRO, said the police patrol team on that fateful day received information about an attempted transportation of the substance, arguably, to the city to sell.

According to him, the patrol team responded swiftly to the call, and in the process the substance was intercepted.

He continued that the owners of the substance are not known, since they took to their heels before the police could reach the scene.

He however said the police had mounted search and investigation to smoke out the culprits and bring them to book.

When asked why Inspector Essel pulled the gun at his other colleague, this what he said: “he only went for the gun to help the patrol team arrest the criminals, and not in any attempt to fire at the other person.

“However, if it is established that he deliberately pulled the gun threatening to shoot the Chief Inspect, he would be dealt with appropriately, since the police will not protect any personnel who will connive and condole with criminals to destabilise the peaceful atmosphere Ghanaians are enjoying.”