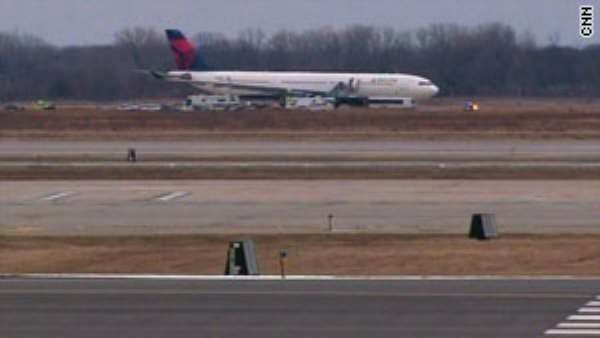 
A Northwest Airlines jet was met by police at Detroit, Michigan's airport after its flight crew reported a "verbally disruptive" passenger Sunday, two days after an alleged attempt to bomb the same flight, aviation officials said.
The passenger spent about an hour in the bathroom and got upset when he was questioned by the crew of the flight from Amsterdam, Netherlands, according to government sources. Law enforcement agents were questioning the man Sunday.
The jet had the same designation -- Flight 253 -- as the one on which a Nigerian man is accused of attempting to set off an explosive device Friday, said Scott Wintner, a spokesman for the Wayne County Airport Authority. Winter told CNN the flight "requested emergency assistance and was pulled aside upon arrival in Detroit."
The jet was taken a long distance from the terminal and "completely engulfed" by emergency vehicles and heavily armed police once it landed, said Don Graham, who was waiting for relatives to arrive at the airport.
The flight arrived about 12:34 p.m., said Susan Elliott, a spokeswoman for Delta Air Lines, which owns Northwest. The 257 passengers were allowed to leave the aircraft about an hour after the jet landed, she said.