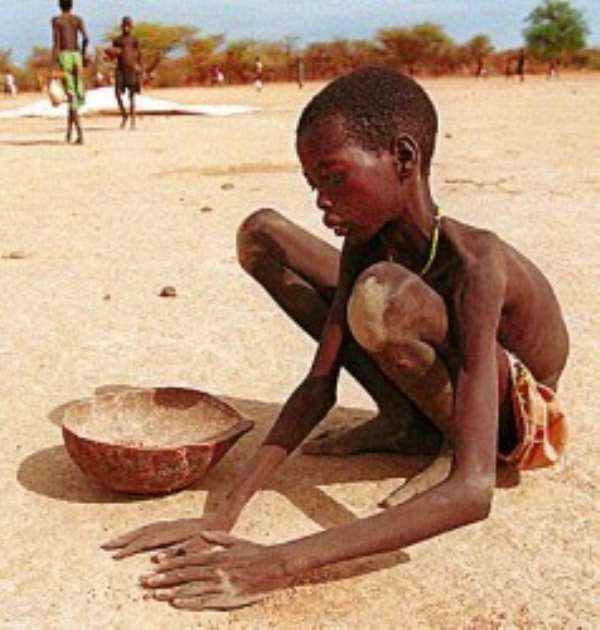 
Though it may often seem that way, Americans don't hold the patent on middle-age malaise. Just ask Sudan's Kutum Malakai.

Just like many people here in America, Malakai is going through a deep midlife crisis. A retired Sudanese Army captain and father of three, the 14-year-old Malakai says he is often left feeling listless and depressed by the thought that half his life is behind him.

"I've really accomplished most of my life goals, so what is there to look forward to?" Malakai says. "I've built my hut. I've built a family. Soon, my children will be conscripted into the army, and the house will be empty. Is that it? Is that all there is?"

Malakai remembers his own military career as a time of adventure, strongly contrasting the boredom and dissatisfaction he feels today.

"I spent two years in the Sudan People's Liberation Army. There, I attained the rank of captain, traveled to foreign deserts, and ate almost daily. It seems like only yesterday I retired with honors, though it was, in fact, almost three years ago. If only I could somehow return to that wonderful, exciting time."

"Where have the days gone?" Malakai asks. "Just a few years ago, my son Ngoba was born. Now, he is about to graduate from the first grade and head out into the world."

In an effort to recapture his lost youth and vitality, Malakai has entered what experts term a "second childhood" phase, extravagantly spending large amounts of money on vanity items.

"Last week, I bought a hoe with a metal tip," Malakai says. "The week before that, I traded in my dark blue shirt for a brighter green one. Next, I'm considering buying a brand-new sportscart for my ox."

According to Sudanese psychologist Jibal al-Muglad, Malakai's behavior is not unusual. "Many middle-aged Sudanese males, usually around the age of 14 or so, start reverting to the behavior of their youth," al-Muglad says. "Largely, this is done to counter oncoming signs of middle age, such as increased height or a cracking voice. Much of this behavior is harmless, but other manifestations can put a strain on a marriage, especially if the man becomes wistful for the sexual freedom of his youth."

Indeed, Malakai speaks of a malaise that has crept into his two-year marriage. "I see my wife growing old just like myself, and I feel depressed," he says. "I think the magic really started to go out of the relationship when she began menstruating."

Malakai confesses to flirting with some of the younger women in his village. "There is a 10-year-old who drinks from the same well as me, and we frequently giggle and make eyes at each other," he says. "I must admit, it is very tempting. I love my wife, but her hip bones are already starting to widen to facilitate childbirth. I find it increasingly difficult to resist the lure of an illicit February-March romance."

"Before long, I will be in my 20s, and the end will be imminent. What then? What will it have all been for?" says Malakai, sighing deeply. "Life is much too short."