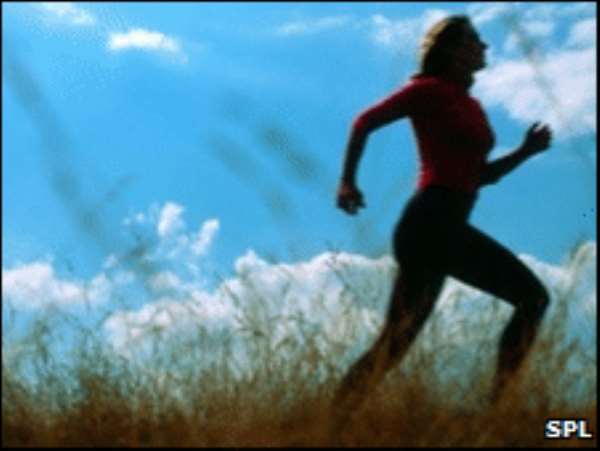 
Exercising may get rid of a hangover, but working out cannot undo the damage that heavy drinking may cause, the government says.

A survey for the Department of Health found almost one in five people in England admitted to exercising to "make up" for a heavy bout of drinking.

The poll also found that one in five people drinks more than double the NHS recommended amounts per day.
For a woman this is two small glasses of wine, and one more for a man.

Some people swear by "sweating out" a hangover and carrying out strenuous exercise to help the body overcome the effects of heavy drinking.

But the government's Know Your Limits campaign is trying to impress upon people that while exercising may make you feel better, it does not undo the damage caused by serious alcohol consumption.

While studies are increasingly showing that alcohol - even large quantities - may be good for the heart, organs such as the liver can suffer grave harm - with alcohol being blamed, for instance, for a large rise in cases of cirrhosis.

It has also been linked to a significant increase in the risk of having a stroke.

Not good enough
A YouGov survey of 2,421 adults for the campaign found nearly 60% of drinkers in England exercise regularly.

This is a higher proportion of exercisers than surveys have found in the population at large, but campaigners say there is no point undertaking a workout to compensate for alcohol consumption - as one in five said they did.

"But the truth is, if you have a big night at the pub, you're not going to compensate with a workout the following day.

"Damage from regularly drinking too much can slowly creep up and you won't see it until it's too late."

Professor Ian Gilmore, President of the Royal College of Physicians and Chair of the Alcohol Health Alliance said "While it is encouraging to see that people are recognizing that heavy drinking is bad for their health, it is clear that the extent of the damage alcohol does to the body is not getting through to people.

"Regular exercise will not stop the onset of liver disease and other alcohol related illnesses if people continue to binge drink above safe limits."