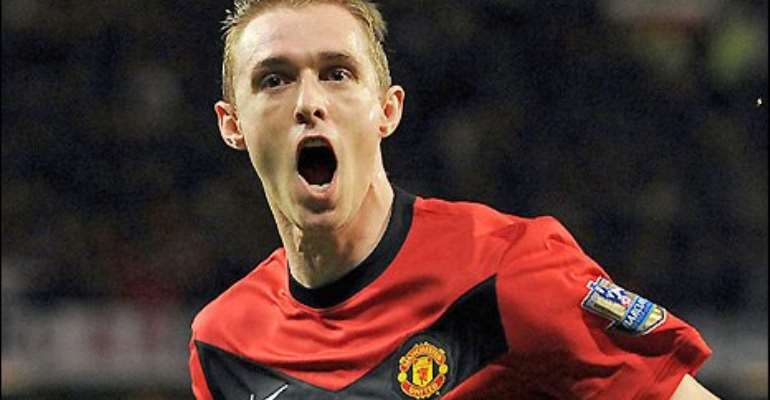 Fletcher celebrates his goal against Everton


Manchester United's Darren Fletcher produced a superb strike as he helped his side ease to a win over Everton.

Fletcher converted United's dominance into a goal when he got over a hip-high ball and sent a shot into the top corner from the edge of the box.

Michael Carrick swept in the second after being picked out by Ryan Giggs.

Antonio Valencia completed Everton's misery when his angled far post shot went in via a deflection as the champions ran out comfortable winners.

It was an improved performance from United following two defeats in three Premier League games and came after leaders Chelsea had temporarily moved eight points clear of them by hammering 4-0 Wolves.

Everton had knocked United out at the FA Cup semi-final stage last season but, without a win at Old Trafford in the league since 1992, anything but a United win seemed unlikely - and so it proved.

The visitors' tactics played into United hands as a depleted Everton set up to frustrate the home side and invited pressure.

United rarely need any encouragement and they quickly set about trying to engineer a way through the visitors' defence.

Wayne Rooney sliced a shot wide and a Giggs effort was saved by Tim Howard, although a probing United initially struggled to find a cutting edge to their slick build-up play.

Everton striker Louis Saha - back at Old Trafford for the first time since his summer switch to Goodison Park - provided some rare action for Edwin van der Sar when he struck a shot on the swivel which the United keeper comfortably saved.

However, it was the home side making all the running and the inevitability that they would eventually score became a reality in spectacular style.

Fletcher is more renowned for his tigerish style but, when Valencia nodded a Patrice Evra cross into his path, the midfielder showed impressive technique as he let the ball bounce before sending a swerving volley into the top corner.

Everton brought on striker Yakubu to support the isolated Saha and they immediately started to pose more problems.

The substitute played Tim Cahill in behind the United defence, although the alert Van der Sar came out to smother at the midfielder's feet as he tried to dink a shot over him.

Yakubu also held off Wes Brown before angling a left-foot shot wide but Everton's hopes were quickly ended when United went up the other end and added a second.

Giggs picked out a lurking Carrick with a precise pass from the left flank after Rooney mis-hit a shot towards the corner flag and the midfielder sidefooted home a left-foot shot from just inside the area.

United were in total command with the only minus for them being that Michael Owen struggled to make an impact on the game as he made only his third Premier League start for them this season.

However, Valencia latched on to a Paul Scholes pass and benefitted from a deflection off Leighton Baines to add the finishing touch to an impressive three points which keeps them in Chelsea's slipstream.

Regulatory agencies to begin random checks at offices to ens...
5 minutes ago