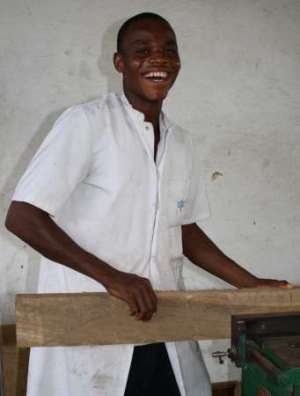 In the last two decades, the Ghana government has placed low priority on technical training and highlighted academic tertiary education with devastating results for youth entry into the labour market and youth entrepreneurship.

“The Ghanaian economy is begging for workmen and women who will drive the production sector yet the country continues to promote an educational system that churns out graduates for non-existent white-collar jobs,” said Prosper Hoeyi, National General Secretary of the Ghana YMCA.

The YMCA Technical Training Centre (TTC) in the capital city, Accra, offers youth trades that are in demand in Ghana, to provide them with the opportunity for both employment and entrepreneurship.

Opened in 1966, the TTC has expanded continuously to now offer three-year courses in:

• Carpentry
• Joinery
• Building construction
• Draftmanship
• Electrical installation
While some students complete secondary schooling before enrolling at the training centre, many do not have basic education and are thus taught this alongside their trade.

“Students are mostly from poor areas and thus the fees are very low in order to afford them the opportunity to learn a trade. Of an enrolment rate of approximately 150 students per year, there is a 97% graduation rate,” said Dominic Mensah, TTC principal.

During the two-day practical sessions each week, students work on contract jobs from government and the private sector. The Centre also provides opportunities for vacation work so that students are able to earn income while studying.

Charles Kulewoshi, a 20-year-old student in his second year training in carpentry and joinery, has set his sights on becoming an entrepreneur.

“I want to establish my own business so I can train other young men so they won't be idle, and can sustain themselves to be in charge of their own future. It is important to be able to look after yourself and not have to rely on your parents or the government. You can create jobs on your own if you take hold of the opportunity,” he said.

Godwin Adu, an ex-student of the TTC who is now a carpentry instructor at the Centre, emphasised the need for training in trade in the context of government not developing this sector. “There is now a stigma attached to learning and working in the trade industry. A trade is seen as a second-class option for people who are poor or can't fit in anywhere. But a trade can give you self-dependence. Even when you are on pension, you can still work and earn a living.”

He said that 65% of students he has trained are in good managerial positions now, and 25% are self-employed. “Those I trained in the 1990s have diverted careers, upskilled and developed themselves. I feel very happy and proud. The economic situation is sadly taking its toll on the graduates of this decade.”

One of the first TTC graduates, Julius Tantuo, is now the Manager of the National Vocational Training Institute (NVTI), the body that certificates the graduates of the YMCA TTC. In his current position, he is actively seeking solutions to increase youth entry into the labour market.

“Entrepreneurship is important but there are no policies or systems in place to direct and encourage it. The co-op system was encouraged under the first regime, with budget set aside and a co-op bank especially for this purpose. Since this system was abolished and government stopped supporting entrepreneurship, the situation has worsened to the current crises,” he said.

The NVTI is working with the South African Department of Trade and Industry to try to use some of their models for youth economic empowerment, according to Julius. In particular, they hope to set up a system for industry to set aside budget to employ graduates as trainees.

Julius's story is a real success case for the TTC. His father passed away when he was six years old and it was difficult for his mother to afford schooling for him and his three siblings.

The vocational training course he took at the YMCA was affordable. “During vacations, the jobs I got through the Centre helped to defray school fees. This bailed my family out as I paid for the fees during the second and third years. My mother was so proud of me.”

After graduating, he was employed by TTC for a year in the income-generation project. He then trained to become a professional technical teacher and taught at a technical college.

“I had received so much benefit at the YMCA that I wanted to impart my skills and talents to benefit others through teaching,” he said. After teaching at a technical college, he then did a course on Management and Administration.

“The YMCA was the foundation of my life and helped me to develop others. It also taught me to save very early in my life. I am involved in much counselling now as a teacher and I use myself as a role model. I tell young boys about my difficult background and many have learnt to save through me,” he said.

.
Another of the first TTC graduates, Emmanuel Larbi, who is going on pension this year, spoke of his firm grounding received at the Centre. “The YMCA gave me focus for my future. Through my YMCA mentor, I also learnt family values and I have worked very hard to give my four children a good education. I have told them: This is the best I can do for you that will lead you to the rest of your life.”

After graduation, he too was employed at the centre. He spent three years as a staff member before completing an advanced trade course and then joining Ghana Atomic Energy Commission. Starting as a junior foreman, he has worked his way up to Chief Technician. “Our youth need to be encouraged. They need to know that they shouldn't try to take short cuts. They need to be interested in what they are doing, focus and have vision and then work hard with determination,” he said.

Stephen Osei, another graduate who works as a mason at the Accra Psychiatric Hospital, through the Ghana Health Services, said that despite the current youth employment crisis, there are jobs in the trade industry. But he cautioned that youth need to take their education very seriously in order to tap into these opportunities.

“At the YMCA I learnt hard skills but I also learnt to believe in myself. I really appreciated the training – it was my springboard and entry into my career and my life. My parents supported me. They were educated, so they wanted me to be educated. I already have an education fund set aside for my five-year-old daughter,” he said.

Charles is already making plans to establish his business. He is confident of a market through his networks of friends and family as he establishes himself, which he will complement with advertising. “When I graduate I will need some land and tools to set up my own business. If I can get a sponsor, this will be great. But if not, I will do it on my own. I have already started saving money for my tools and I am paying for my school fees, through the vacation jobs that I get through the Centre.”

He advises other youth that opportunity comes – but sometimes it only comes once, so use every opportunity you have.

Photo: Charles Kulewoshi
This article originally appeared in Siyahamba (no 15), newsletter of the Africa Alliance of YMCA.