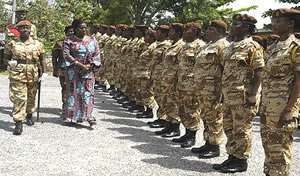 Last week, two news items with a common cord came into the public domain, which once again raised serious concerns about our penal system and conditions in our prisons.

In an interview granted the Daily Graphic, the Director-General of Prisons, Mr William Kwadwo Asiedu, painted a horrid picture of conditions in the country's prison facilities.

Quoting from the 2008 Annual Report of the Ghana Prisons Service, Mr Asiedu mentioned overcrowding as a result of increasing prison population, poor facilities for both inmates and service staff and dwindling budgetary allocation.

What the Director-General of Prisons said was no news to those who care to know about the deplorable conditions in the country's prisons.

Perhaps, what might jolt many, is the 5,170,840 figure contained in the 2008 Annual Report on the Ghana Prisons Service as the cumulative annual prisoner population for the year 2008.

If this figure is a true reflection of affairs, then it means that at any particular time of the year, almost a quarter of the country's population was being accommodated in the country's prisons.

That is quite intriguing and a serious cause for alarm. With the limited resources and poor facilities available, what that means is that most of the prisoners are paying more than enough for their crimes or offences.

The remedy as has always been prescribed is to build more prisons, expand the existing ones and equip them adequately so that they can play their statutory role as reformation and correctional centres.

Mr Cletus Avorka, the Minister of the Interior, as it seemed, sounded like one of those who did not have the true picture of what our prisons looked like until he came face to face with reality, when he visited the Ho Central Prisons.

He, like many others before him, could not but call for reforms in the country's penal system, when he saw at first-hand, the degrading, dehumanising and appalling state of the prison, which in all probability, may not be different from the rest in the country.

Mr Avorka might have been overwhelmed by what he saw at the prison and got carried away by anger and emotion when he misdirected his frustration at the police by saying, “The police should promote reconciliation by mediating petty squabbles and not use the courts as a dumping ground of our problems.”

“It was unfair to jail people whose infractions were only misdemeanour, to cram the same prison with hardened criminals when they could do community service,” he said when he observed that there were serious flaws in the country's penal system.

He was, therefore, right to call for the revision of the country's penal system to ensure effective modern correctional trends. But are the police strong enough to carry the burden of penal transformation alone?

Or should they be seen to be the sole culprits in a bad situation such as this national calamity? Surely I do not think Mr Avorka was expecting the police to set up their own penal system to determine those who go to jail, those who do community service and those who are just cautioned and told to go and sin no more.

What will Mr Avorka and those who share his opinion say, if the police stations become arbitration centres and where offenders and criminals are told to go home and come no more because the courts are full?

That means the matter cannot be treated so simply. It goes beyond the police to determine who gets custodial sentence, who gets a fine and who does community service.

What about the courts which fail to exercise their discretionary powers in a reasonable manner as to avoid imposing custodial sentence when a fine could still have applied according to the law?

It is true that there are many men and women parading the streets of our towns and cities not only as free citizens, but as proud, influential and respectable people after embezzling millions of public money or using many criminal means, drug-dealing and money laundering to amass wealth, while a farmer who steals a bunch of plantain from a neighbour's farm is seen as a criminal who goes to jail for long terms.

But that is the society we have created for ourselves in which more value is placed on wealth than substance. Just imagine that a person who once held public office is called upon to render account for his stewardship, then suddenly he becomes a hero and escorted to the court premises amidst fanfare and chanting of war songs.

In the end, a villain is painted as a victim because members of society are not prepared to judge people impartially, but emotionally, through political, ethnic and religious lens.

The thief and nation wrecker goes free with his ill-gotten wealth while the poor person who was seen with a fowl hidden under his armpit is condemned by society.

Whatever the case, it is not only just the penal but the whole judicial system which needs to be revisited. Some of the laws and their corresponding sanctions predate the colonial era.

The judicial system must generally undergo transformation both in terms of physical infrastructure and human resources so that cases are speedily and effectively disposed of to reduce remand cases.

Any review without factoring the problems of the police will be an exercise in futility. Take a recent story that there is only one police prosecutor in the whole of the Upper West Region.

Until we bring reforms into the judicial, prisons and police services and until we overhaul the penal system, the police will continue to arrest and process suspected criminals to the courts, because that is part of their responsibilities, and the courts will also exact penalties as prescribed by law, if even they do so capriciously.

As for the prisons, in their state they cannot be anything apart from death camps or concentration camps at best. Due to limited resources and facilities, most of the prisoners do not gain vocational training while serving their sentences and, therefore, come out very wretched or more hardened and go ahead to commit more serious crimes.

This is confirmed in the 2008 report under a reference which said that out of the 9,394 convicted prisoners admitted in 2008, 1,806, representing 19.3 per cent, had had one or more previous convictions.

Efforts by the Prisons Service to establish after-care project for ex-convicts to facilitate their smooth re-integration, according to the report, have been hampered by lack of funding. The danger looming is the relatively youthful nature of the prisoner population.

As is clearly seen, there is a lot to be done to streamline the penal system to bring it close to an ideal one. There is the need to revamp the prison workshops with modern equipment so that the reformatory and correctional process can be carried out through psychological re-adjustment and vocational training.

Facilities in the prisons should be improved to make them more habitable, while the after-care project should be revitalised to support the re-integration process.

The prison officers themselves need redemption. They need better and decent accommodation. There should be a clear distinction between a warder and a prisoner.

For now, the warders are only one step ahead of the inmates, and no wonder people refer to them as glorious prisoners.

If we go through the records, it will be realised that Mr Avorka is not the first person, and very likely not the last, to express disgust at the prison system.

That means it will need more than political rhetoric and expression of outrage to make things change It is the hope of Ghanaians that in two years' time, when the Minister of the Interior visits any of the country's prisons, he will not hold his nose because of the heavy stench of human sweat blending with urine and human waste in a suffocating environment.

He will, hopefully, see inmates who are preparing themselves seriously in well-equipped workshops for a new life after their release.