GIVE ME BACK MY PASSPORT, IT IS MY RIGHT! (AN EXPOSITION ON THE LAW CONCERNING PASSPORT SEIZURES IN GHANA 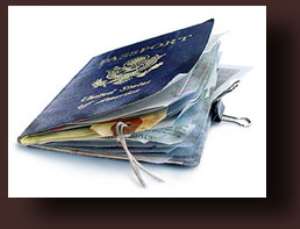 INTRODUCTION
The Foreign Enlistment Act, 1961 interprets a passport as including “every form of travel document issued on behalf of the Republic". According to the Immigration Act, 2000 (ACT 573) a “passport means a valid travel document issued to the person producing it by or on behalf of the country of which he is a subject or a citizen for a period which, according to the laws of that country, has not expired and which refers to the person, and is furnished with a photograph of him"(both laws Acts are of Ghana)

Recently there has been seizure of passports of citizens of this country especially those of former government officials. Among which is the Osei- adjei affair: which involves the former foreign minister taking the Attorney- General and Bureau of National Investigation to court for the seizure of his passport which he contends is illegal. An Accra Fast Track High Court which is hearing the case will make its final ruling on August 11, 2009. Passport seizures is not restricted to Ghana, it is a common occurrence across a lot of countries in the world and even in Ghana it is not restricted to this current Government Court cases that such seizures usually are of variant results, sometimes with the state being held to be have acted lawfully in seizing the passport of a citizen and sometimes with the individual winning.

In this piece, it is submitted that the right to own a passport, especially for the purposes of travelling outside Ghana is a fundamental right of every Ghanaian which cannot be curtailed unless by lawful exceptions to the freedom to movement and liberty as well as the right to property. Exceptions which I humbly submit is only permissible if it is in accordance with the 1992 constitution of Ghana

THE FUNDAMENTAL HUMAN RIGHT TO LEAVE AND ENTER GHANA

It is important at this point to note that the ownership of passport is very necessary to enjoy your right to movement especially outside the borders of the country. And the seizure of a person's passport without any legal justification is not only an affront against a person's right to movement but also against the law.

Passports and Travel Certificates Decree, 1967 (NLCD 155).as amended by passports and Travel Certificates (Amendment) Law, 1993 (PNDCL 310) which happens the law which directly regulates Passports and Travel documents in Ghana states in section 12(3) provides that in any case in which the Member of the National Liberation Council responsible for External Affairs ( now the foreign minister ) is satisfied that any passport or travel certificate issued under this Decree, whether such passport or travel certificate is still valid or has ceased to be valid, should be surrendered—

(a) On the ground that it is being improperly used by the holder thereof, or

(b) On any other ground which he considers sufficient to require its surrender,

If this law is constitutional (which I think it is not) then it gives the power to the Foreign Minister and definitely not the Police force or the Bureau of National Investigation to confiscate passport. I indicated that I am of the opinion that the section 12(3) of the above- mentioned Act is unconstitutional because the 1992 constitution of Ghana is quite explicit on the various instances when one's right to personal liberty and movement can be curtailed; (1) Every person shall be entitled to his personal liberty and no person shall be deprived of his personal liberty except in the following cases and in accordance with procedure permitted by law—

(a) In execution of a sentence or order of a court in respect of a criminal offence of which he has been convicted; or

(b) In execution of an order of a court punishing him for contempt of court; or

(c) For the purpose of bringing him before a court in execution of an order of a court; or

(d) in the case of a person suffering from an infectious or contagious disease, a person of unsound mind, a person addicted to drugs or alcohol or a vagrant, for the purpose of his care or treatment or the protection of the community; or

(e) For the purpose of the education or welfare of a person who has not attained the age of eighteen years; or

(g) Upon reasonable suspicion of his having committed or being about to commit a criminal offence under the laws of Ghana.

Therefore, a person's liberty cannot be limited unless as stated above. In fact upon a critical assessment of the provision above, the limitation of the person's liberty is the detention or arrest or restriction and not the confiscation of his means of enjoying that right. No one is thus justified in seizing a passport, a bus pass, a travelling ticket or any instrument a person is using to enjoy his right to liberty or freedom. Security personnel who do not want a suspect to abscond should either arrest the person and bring him or her to court within 48 hours or hold their peace for the person to do as he/s

SOME INTERNATIONAL DIMENSIONS ON THE SUBJECT

In the case of Ghani v. Jones [1969] 3 W.L.R. 1158, C.A. (this was case which involved passport seizure by the police) Lord Denning one of the most eminent and well-respected judge of the English courts had this say about passport seizures and in fact he did conclude his judgment by saying “I cannot help feeling that the real reason why the passports have not been returned is because the officers wish to prevent the plaintiffs from leaving this country pending police inquiries. That is not a legitimate ground for holding them. Either they have grounds for arresting them, or they have not. If they have not, the plaintiffs should be allowed to leave—even if it means they are fleeing from the reach of justice. A man's liberty of movement is regarded so highly by the law of England that it is not to be hindered or prevented except on the surest grounds. It must not be taken away on a suspicion which is not grave enough to warrant his arrest...” Also, in the case of Suresh Nanda v. C.B.I [Supreme court of India; criminal Appeals Division Decided on the 24th of January 2008] the supreme court of India was quick to say that the constitution of India by guaranteeing the right to movement and the right to personal liberty has made it clear that a person had a right either to move to or from India and that such a right could only be curtailed on accordance with law. And that the seizure of a person's passport was not one of the exceptions provided by the law and was therefore unconstitutional and illegal.

In the celebrated Nigerian case of Olisa Agbakoba v. The Director State Security Services and Anor unreported suit no. CA/L/225/92 of 6th July, 1994, the facts surrounding this case are that; the passport of the Claimant who was the president of The Civil Liberties Organization (an NGO in Nigeria) was impounded at the Murtala Mohammed International Airport by a security officer without any reasons thus preventing him to travel to the Netherlands for a conference. At the first instance in the High court (Akinboye J sitting), the argument by the claimant that he had a derivative right to a passport was rejected by the High court, however upon appeal to the Court of Appeal, the court was of the opinion that the right to own a passport was a logical derivative to the right to move in and out of Nigeria.

In 2006, the seizure of the Passport of owner and publisher of Zimbabwe independent and Standard and leading South African, Mail & Guardian, and Trevor Ncube attracted a lot attention and criticism. The passport was however released upon an application to the High Court

CONCLUSION
If the seizure of one's passport becomes a political decision, then it leaves a clear chance for the manipulation and oppression of political opponents and citizen alike by the Government in power. A lot of arguments are being presented that the passport is the property of the state and since it is for the state it can be confiscated by the state at anytime. The legal regime is clear, every Ghanaian has a right to own a passport and such a passport cannot be seized by the police or any security apparatus without the relevant legal backing and due process.