The Mayor Of Accra : Gentle But Tough 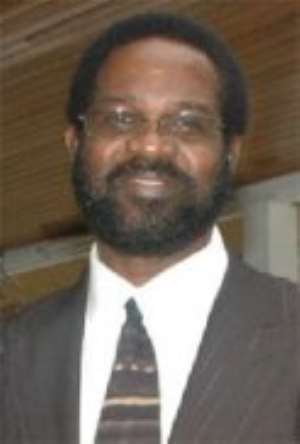 Beneath the gentle looks of the 54-year-old Mayor of Accra lies the tough character of the typical Sempe-born man, Alfred Oko Vanderpuije.

The Mayor born and bred at Mamprobi, Darkuman and Dansoman at various stages of his childhood, confirmed in an interview with The Mirror, “I am tough, very tough; the typical Accra boy born at British Accra (James Town).”

Mr Vanderpuije, with double royal lineage (Otublohum and Edina), has an enviable world view, particularly the development of modern cities, as well as his practical involvement in transforming some of the world’s known cities during his sojourn in the United States of America (USA) for nearly 26 years. He mentioned Columbia in South Carolina, Kansas City in Kansas, Rockford in Illinois, among others.

He returned to Ghana in July 2008 and joined the Professor John Evans Atta Mills campaign team. When his party, the National Democratic Congress (NDC), eventually won power, he became a member of the Transition Team and was later appointed the Mayor of Accra.

During the period that Mr Vanderpuije lived and worked in the US as a public school teacher, educator and administrator, he contributed positively to the transformation of many cities where he lived and worked and he believes that with the onus now falling on his lap to change the face of Accra, he does not hope to falter.

He deems his tenure as an opportune time to change the face of Accra and promises to discharge his duties with utmost diligence and accomplish his task with distinction to the satisfaction of all residents of the city.

“My position is a challenging one but I have the experience and know what cities look like. I have worked with community leaders and mayors and as an educator and public school administrator part of my work was to develop the area I worked.”

The Mayor said he would lead the advocacy for what was good for the communities, adding that he had the enthusiasm and knew he could make a difference.

He promised to continue what other mayors before him had done and leave a legacy for the continuous development of Accra.

According to him, there were diverse challenges confronting the city of Accra. He mentioned congestion and fragmented development and promised to use his leadership, as well as a four-year master plan that stipulates what the development of Accra must be, to achieve his vision.

Guided by that vision, which he had categorised into seven major areas and dubbed the Seven Pillars, Mr Vanderpuije also promised to modernise the educational system in the city to meet the needs of all students, as well as enhance revenue mobilisation through street naming and house numbering to ensure accurate data on properties, review and capture all markets and lorry parks in the city.

Additionally, he promised to construct new roads and improve existing ones and ensure an effective transportation system throughout the metropolis of Accra.

When asked whether he was sure to accomplish all these ambitious plans, knowing very well that others before him had tried but could not meet the targets they set for themselves, Mr Vanderpuije was quick to respond, “Ghanaians believe in God and God will lead and help us.

It’s God who sets up kings and when the time of reckoning comes everybody will realise that I played my role and God’s name will be glorified”.

He promised to flow with the people in whatever he did and added that the hallmark of education was to put people first and that “when you involve them you will always overcome”.

The mayor also lamented over the level of indiscipline in the city where bye-laws for motorists, traders and pedestrians had been ignored with impunity.

“The first thing to do is to call those situations to order and bring order to the way we do business in the central business area,” he explained.

He promised to revolutionalise waste management in the city and use the nearly 2000 tonnes of waste to generate energy.

Mr Vanderpuije said he had been infected by the ideals and principles of former President Jerry Rawlings since 1982 and had been a strong adherent of his principles of probity, accountability and integrity.

After training as a teacher at the Accra Training College when he completed his secondary education at the Latebiokorshie Secondary School, the Accra Mayor taught for some time at the Ebenezer One Middle School in Accra and later became the District Athletics Director before relocating to the US.

In the US, he taught in various schools in states such as South Carolina, Illinois, Missouri and Kansas.

While in the US, he was an active member of the NDC, rising to become the Chairman of the South Carolina Chapter and later the Chicago Chapter.

Mr Vanderpuije was an active participant in the national election campaigns of the NDC in 2000 and 2004 and in 2008 he was a member of the party’s delegation to the strong room of the Electoral Commission. He was also an active fundraiser for the party and the Professor Mills campaign.

He is the eldest son of the late Otublohum Mantse, Nii Kpakpo Oti III, and grandson of the late Nana Conduah of Edina. To show his royal status in the Edina Traditional Area, he was given the stool name Nana Kofi Ababio III.

The Accra Mayor was born on November 4, 1955 and is married to Gifty with two daughters, Mildred and Alfreda, He is an active member of the Seventh-Day Adventist Church. Reading and taking up challenges are his hobbies.