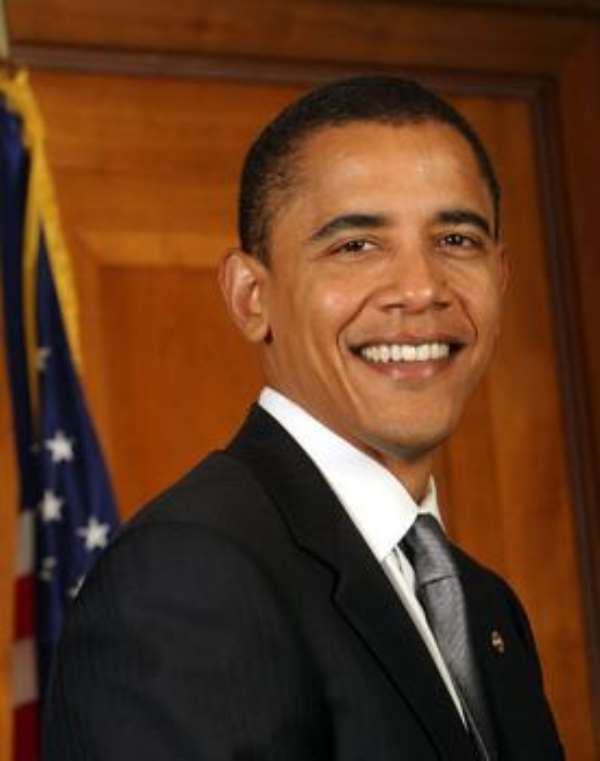 Not since Dom Diogo d'Azambuja's mission to Elmina on January 20, 1482 has a visiting potentate garnered so much interest on our shores. It is widely assumed that d'Azambuja's visit was the first of Europeans to our shores. The facts are a little different. The Portuguese, then the most powerful sea -faring country in the world, had been competitively trading with their rivals the Castilians from Spain at Shama for about 10 years before this official mission.

The need to control trade led the Portuguese to a strategic long term plan which involved the ability to store inventory and thus control prices. The Coast of Elmina provided the best location for the construction of a large building for such purposes. When d'Azambuja arrived with his delegation to Elmina according to two accounts, one by Pina and the other by Barros, the interpreter was an African from the coast.

What does all this have to do with Mr. Obama? We consider and project ourselves as a poor nation but the world has always viewed our patch of the earth as a location burdened with riches. The Castilians were followed by the Portuguese, the Dutch, Swedes, Danes and later the British. In spite of compelling evidence to the contrary, which is obvious to any trading nation, we have positioned ourselves as beggars and enter into every major transaction from that position. This has not served as well. We are not poor. We have made ourselves appear poor by mismanaging our resources through misplaced priorities.

Mr. Obama is the third successive American President to visit Ghana and this cannot be because we are a poor beggar nation even though begging has superseded soccer as a national sport within our common culture. We are less concerned with harnessing our resources for our own good and tend to speculate with our resources for short –term gains for a few fat cats, while the rest of the citizenry whither in abject poverty in the 21st century. Mr. Obama, his African heritage notwithstanding, is visiting because like the John II, King of Portugal who sent d'Azambuja, is the leader of the unitary super power in the world. As such, he does not gather his camel caravan for trivial jaunts.

This is not a black brotherhood kind of visit despite our naïve sentiments in this regard. Mr. Obama is interested in advancing the strategic interests of his country like his John II of Portugal of the late, 15th century. Just as d'Azambuja sought a piece of Elmina rock to build his castle from Nana Kwamina Ansa (Caramansa, in Portuguese writings), Mr. Obama is interested in a small dent in our absolute sovereignty to protect the economic and military strategic interests of the United States of America. This is only natural. He has to protect the future sources of energy for his highly productive and consumptive country. Our modern sovereignty is about partnerships for development and we should weigh Mr. Obama's proposals with our highest development goals at the forefront. This should not become another wasted opportunity.

In 1482, Kwamina Ansa was very ambivalent about the Portuguese request, noting that “the desires and passions common to all men would therefore inevitably bring disputes”, thus potentially souring his already existing good trading relationship with the Portuguese. Barros noted of Kwamina Ansa, “Like anyone who wished to grasp those matters that were being proposed to him, he not only listened eagerly when the interpreter summarized them but also watched all the gestures that Diogo de Azambuja made. While this continued, both he and his men remained in complete silence, without one of them even spitting, so obedient and well-instructed did he have them. When the speech was concluded, like a man who wished to reflect on what he had heard and consider the reply he must make, he fixed his eyes on the ground for a short space of time and then gave a speech”.

His wariness about the castle and how it could undermine his sovereignty were foremost in his mind. Yet, at the same time he recognized the vast military and technological superiority of his new trading partners. He further expressed his doubts and his search for the ideal distance from the superpower, “For friends who met from time to time treated each other with greater affection than if they were neighbors.” Sensing the doubts raised by Kwamina Ansa, d'Azambuja responded “That the reason why the king, his lord, sent him to that land with so magnificent a display was his desire for peace and a closer friendship with Caramansa than the one they had had up to now. As a token of this desire, he wished to erect there a building in which he might keep his property, by which action showed the greater confidence he had in him, Caramansa, and in his vassals, for no-one would put their property in a place where deceitful practices were suspected.”

In the end, Kwamina Ansa relented, giving them permission to build, asking that “peace and true dealings be observed.” The Portuguese were confined them to the rocky promontory from 1482 until 1637 when the Trans Atlantic Slave Trade spurred the Dutch conquest of the castle and the construction of other castles and forts along the coast to facilitate the commerce in the ignominious trade.

Today, it is not about gold but about energy security and the new Elmina Castle. It is believed that Ghana's significant participation in what is now described as a “distributed command” for the US African Military Command (USAFRICOM) is high on Mr. Obama's agenda. The new Portugal needs to engage Ghana at this level to guarantee energy security for the most powerful country in the world. Will President Mills find the right distance Kwamina Ansa found, if he did find it? Over 500 years of history remains the judge of his encounter.

It is believed that one Mr. C. Columbus was on d'Azambuja's mission. He later made two trips from Lisbon to Elmina to estimate the supplies he would need for his western approach to India. As we all know, 10 years later, in 1492 he arrived in the Caribbean and soon after America was “discovered”.

Mr. Barack Obama, you are most welcome to Ghana. We hope along with Prof. Mills you find the right distance in the relationship between Ghana and the US for true mutual benefit of our peoples for years to come. In the spirit of Sankofa which brings you home to Black Africa on your first visit as President of the USA, we say Akwaaba!

In the words of Kwamina Ansa of Edina, “May peace and true dealings be observed.”

The author has 70 publications published on Modern Ghana.