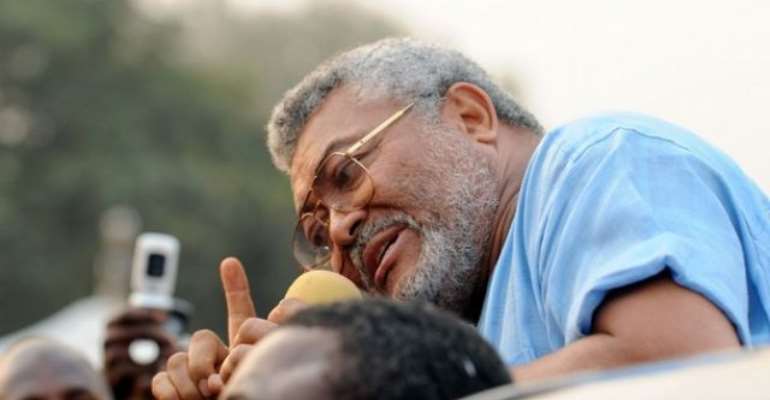 In Jerry Rawlings' mind there has been a 'coup' – his third coup in 30 years. This one, however, seems different and a bit weird! In the first two coups, there was no need for him to go around the country to campaign to win the hearts and minds – and the mandate – of the people. He forcefully came to power through the back door, with a gun in his hand. Immediately he took charge, he went about changing the status quo, sometimes with brute force and with no regard for common sense and the rule of law.

In those days, if you stood before Chairman Rawlings and blinked more than he considered necessary, you could be charged with treason. If he didn't like your shoes, your nose or how you laughed, he changed your sleeping place. Only his loyal supporters were allowed to take charge of sensitive public offices. Those were the days of the 'revolution' and it was alright to dismiss and appoint people on radio.

The story is told of a man who heard of his appointment to a very important office as he stood in a queue, waiting his turn – with bated urgency – to use the public toilet. Imagine what happened when he heard the surprise announcement.

Rawlings likes to refer his latest 'coup' as a “redemption” and a “liberation”. This coup is the election of his protégé, John Atta Mills, as the President of the Republic.

Unfortunately, times have changed and things are not what they used to be. To begin with, even though he helped to make this 'coup' a success, he is not the one taking all the glory and making all the decisions. Therefore, things are not being done his way – brash, brusque, and in some cases, brutish.

So unhappy is Rawlings that he decided to lash out at the new president's “poverty of inaction” – earning the accolade of the first high profile citizen to publicly criticise President Mills, who has been in office for just about one week. Rawlings is peeved that the new president hasn't dismissed district chief executives and other senior public officers appointed by his predecessor. President Mills has asked these officers to stay in office until he finds his bearings. It's a very smart decision he took. By asking the DCEs to stay on, President Mills is sending out very clear signals that he is in a mood to work with his opponents. Is there a better way to achieve national reconciliation? Most of these DCEs will eventually be sacked but President Mills' decision to allow them to stay on – albeit for a short while – means that the transition at the district level will not be as haphazard and awkward as it has been at the national level. It also buys him a lot of time to look for the brightest and best to run the districts.

None of these has crossed Rawlings' mind and he thinks allowing the DCEs to stay on is a recipe for chaos. Speaking to some NDC bigwigs, some of them dozing, Rawlings questioned President Mills' “transitional choices”.

“To pluck out Kufuor and leave everything else intact is courting potential disaster,” he says. “Are we in power or not? Have we taken over or not?”

As usual, Rawlings' comments have attracted a mixed response from the Ghanaian public. There are those who think, and rightly so, that he has a right to express his opinions and he can choose to do it anyhow and anywhere he wants. But there are those who have gotten themselves so worked up, accusing him of brazenly attempting to influence President Mills. They simply want Rawlings to back off! That won't happen anytime soon.

Over the next four years, expect Rawlings to do everything he can to try to influence President Mills' actions and decisions. He did it to Kufuor and he will do it even more with Mills. The “are we in power” speech is just the beginning.

So what is Mills to do?
If I were Mills, I'd stay as far away from Rawlings as possible. Seriously, I don't think Rawlings has anything to offer Mills. His time is past. And since Mills himself acknowledges we have “changed to move forward”, I hope he recognises that Ghanaians want a complete break with the past. This means that he should diplomatically ignore Rawlings and all his effusions and focus on delivering what he has promised. Kufuor ruled this country for eight years without any input from Rawlings and Mills can do so as well.

But President Mills first needs to take steps to get Rawlings off his back. Achieving that could be a problem but it's not impossible. I will suggest that President Mills should help his 'mentor' get a new job – preferably, one that keeps him out of the country for long periods. How about getting him a job as a UN envoy to the dens of the Somali pirates? Under Kufuor, he got job to help chase mosquitoes out of Africa. Since there are still more mosquitoes in Africa than human being on planet earth, it goes without saying that he didn't do so well in that job. But Mills should find a way of convincing the UN that Rawlings would be able to convince the Pirates of Somalia to take to fishing.

President Mills could also have a hearty chat with his mentor and tell him without equivocation to stop breathing down his neck. Rawlings might not take kindly to this but he has to be told that such public criticisms do his protégé no good. It only feeds into the perception that our president could be our ex-president's 'boy-boy'.

In face of his mentor's public criticism, however, President Mills has an opportunity to show his citizens that he cannot be pushed around – as many Ghanaians fear. If he doesn't go rushing into the house-cleaning exercise Rawlings is demanding, he wouldn't have much trouble convincing Ghanaians that he is his own man, with a solid pair between his legs – capable of taking his own decisions without Rawlings' prodding.