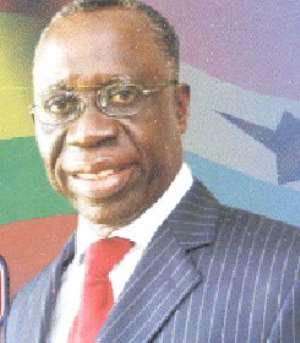 Those who know Mr. Yaw Osafo-Maafo, former Finance Minister, accept that he knows a lot about Ghana's economy, finance and banking.

However, one thing people may not know about him is that he gathered some of his experience right from childhood when he sold vegetables for his mother at the market.

“My mother sold tomatoes, onions, garden eggs and many other items at the market so after school I went there to take over from her while she went home to prepare dinner for the family.

I'm sure you'll be wondering whether he was as vocal as we know him to be when he was young. The answer to that is a very big yes. And he says so himself, "I was smallish, very argumentative and eloquent in both English and Twi so I used that to defend myself and my colleagues from our seniors who tried to bully us in school".

"I was so active and vocal that while acting as the National Union of Ghana Students (NUGS) President in 1965, I was arrested, detained and released several times before the 1966 coup, " he said in an interview with the Junior Graphic.

He is an engineer by profession and a banker by occupation. It was surprising to learn that his parents who were both farmers were illiterates.

It was his grandmother who insisted that all her grandchildren, should be sent to school. Young Yaw was, therefore, enrolled at the Akyem Awisa Presbyterian Primary School together with his brothers.

He said when he started school, he still enjoyed selling but never allowed that to interfere with his studies. Even if he did, his grandmother would not allow that.

"She always made sure that every evening I, together with my brothers, Dr Kwakye-Maafo, Dr Adjei-Maafo and my first cousin, the late Santo, spent some time studying."

While at school, he said what inspired him most to study hard was the healthy competition he had with two other boys in his class. "We competed always for the first place.”

In 1953 when he, together with 157 students from various schools in the Akyem area, competed for admission to Middle Form One at the famous Akyem Awisa Middle Boarding school, he topped the list.

Young Osafo-Maafo was not only serious with his studies but also ensured that he performed his chores diligently.

“Every morning we went to the Kosiko River to fetch water and bathe in it before going to school. He's very proud of the kind of training he got as a young boy. "Our work on the farm taught me a lot. “I can pluck cocoa, break the pod and weed very well. I was also involved in “nnoboa” and used that to clear all my mother's farms,” he said.

Young Osafo-Maafo was one of the famous 1957 “independence children” who entered Achimota School that year. As a result, he witnessed a lot of the activities leading to independence, including the visit of the then United States Vice-President, Richard Nixon. He also used to go to the Polo Ground to listen to President Nkrumah and other lectures from politicians.

And do you know that one of Mr Osafo-Maafo's best friends at Achimota School was Prof Atta Mills?

“We were in the same house and dormitory and were close, even up to university. While I was the best Science student at Achimota, Prof Mills was the best Arts student.

In 1963, when I got the best science experimental prize in Ghana, Prof Mills was an outstanding student in Arts,” he recalled. “Infact, we are still very good friends and visit each other despite our political beliefs,” he added

Mr. Osafo-Maafo's father was the Gyasehene of Akyem Awisa, for which reason the MP learnt a lot about the culture of his people, including the Adowa, Kete and Fontomfrom dances.

He brought that experience to bear at Achimota and so he became the Twi tribal head, as well as leader of the school yell during functions like the Founder's Day.

After Achimota, Young Osafo-Maafo went to the Kwame Nkrumah University of Science and Technology (KNUST) where he studied engineering. As a result of his good leadership skills, he became the first Vice-President of NUGS and later, its President when the substantive President was imprisoned during the 1966 coup.

After KNUST, Mr Osafo-Maafo worked with a number of companies, including VALCO, the Bank for Housing and Construction and the National Investment Bank and became the Managing Director of both banks.

He was a member of the Consultative Assembly representing the Ghana Institution of Engineers that wrote the 1992 Constitution.

He is married to Madam Anna Yaa Akyeaa, with whom he has four children.