EPA to act on e-waste hazards in Ghana 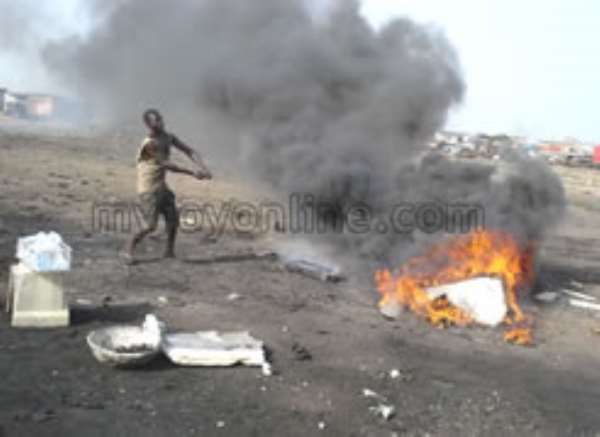 
Ghana's Environmental Protection Agency, (EPA) now appears to be acting to address the problems of e-waste that has been confronting the country.

The Daily Graphic issue of Friday April 25, 2008, reported that the EPA is developing guidelines to regulate the importation of used electronic gadgets into the country.

The guidelines, according to the EPA, would prevent the dumping of such gadgets which could be harmful to the public.

The report quoted the Public Relations Officer of the EPA, Mr. William Abaidoo as saying that the guidelines would serve as a standard for what “we want to have and receive as a country in terms of electronic wastes.”

According to him, electronic wastes are used televisions, radios, computers, cameras and mobile phone batteries.

The report said, he noted that most of these used electronics gadgets were hazardous, adding that if such wastes were not regulated and indiscriminately added to other refuse, the toxin from those wastes could leak into underground water sources.

Mr. Abaidoo, told the Daily Graphic that a proposal had been tabled by the Chemical Control and Management Committee to set-up a sub-committee of the Hazardous Waste Committee to look at used electronics gadgets separately.

According to Mr. Abaidoo, the committee would categorise the types of used electronics gadgets that would be allowed into the country.

He also said, an inventory would be taken to ascertain the actual situation on the ground through the application of questionnaires to importers and end users of these electronics products to see the quantity they received, what they used them for and the way they were disposed of.

Mr. Abaidoo said the committee would use the data to be collected as a baseline data to come out with the guidelines to regulate the inflow of the items as well as suggest ways of disposal and recycling of the wastes.

He told the Daily Graphic that the committee would be made up of officials of the Customs, Excise and Preventive Service (CEPS), Ministry of Trade, end users of electronics wastes, computer technicians, repairers, the Ghana Standards Board and telecommunications companies.

He said, "we have finished all the paper work. The identification of stakeholders have also been done."

Keen observers of the e-waste problem in Ghana see this basic step the EPA has taken as commendable. But the step in the same breath betrays the EPA's lack of understanding of the matter.

Even though, Ghana has ratified the Basel Convention on the Control of Transboundary Movements of Hazardous Wastes and their Disposal in 2005, not much has been done to implement the Convention in the country.

The Basel Convention on the Transboundary Movement of Hazardous Wastes and their Disposal was adopted on 21 March 1989 and went into force on 5 May 1992. It establishes a framework of control over the transboundary movements of hazardous wastes.

The Convention was initiated in response to numerous international scandals regarding hazardous waste trafficking that began to occur in the late 1980s.

The EPA must do more than the usual if it must effectively safeguard Ghanaians and the environment from the dangers of e-waste.

It is however, hoped that this initiative would be pursued with the urgency and commitment it requires, because if done right, many Ghanaian lives could be saved, if so many have not gone down already with cancers that these chemicals predispose humans to.

Akufo-Addo Has Turned Ghana Into 'Hell-Hole Instead Of Parad...
35 minutes ago