KOFI ANNAN GETS HIS BOUNCE BACK 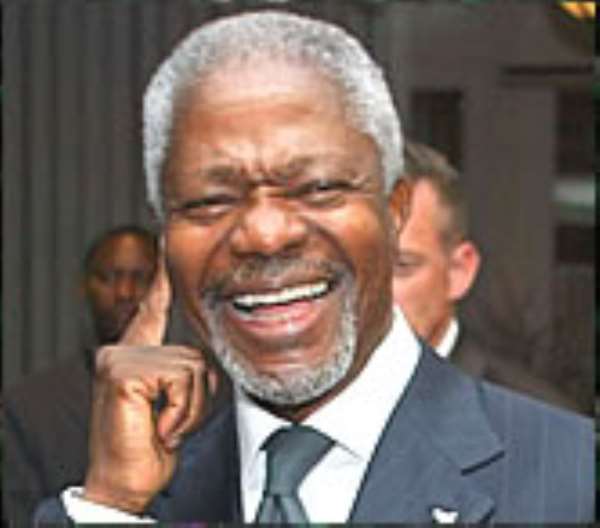 Last week, previous and present UN secretary generals Kofi Annan and Ban Ki-moon appeared together at the Waldorf Astoria on the occasion of the MacArthur Foundation's presentation of its first International Justice Award to Annan. It was pretty much their first public appearance since Annan handed over the reins to Ban on January 1, 2007, and it was a significant occasion for both them and the UN itself.

The explanations for Annan's absence vary. Certainly, in his ineffably polite way, he did not want to cramp his successor's style, but also in the early stages of Ban's tenure, his team paid too much attention to the "American" view - as expressed by the former unconfirmed US ambassador to the UN, John Bolton, and the Murdoch press.

The vitriolic prejudice and attacks on Annan from Bolton and his ilk did much to redeem the Ghanaian's reputation with the rest of the world, but clearly influenced Ban's team when they arrived, basically clutching Bolton's "reform" plan in their hands. Their experience at the UN has clearly taught them a lot, not least about the qualities of the former secretary general.

It was Ban who approached Annan to undertake what seems to have been a remarkably successful mission to Kenya, and in fact leaned hard on the Kenyans to accept him.

In fact Ban and Annan have much in common. Both are humble men, in the best possible sense, confident enough in their own dignity to be approachable and personable, and they both have a strong moral sense that they do not brandish ostentatiously but manifest when needed.

In fact, a just criticism of both would be that they let their diplomatic duties muffle their use of the bully pulpit that the office provides. Even so, when he was campaigning for the office, Ban expressed his support for the "responsibility to protect" (R2P), and the International Criminal Court - anathema to Bolton, who had spent years trying to strangle it.

He reiterated that support at the presentation last Thursday, giving due credit to Annan, whose chief legacy was indeed getting the whole membership of the UN to agree to R2P. In effect, at the sixtieth anniversary of the organisation the membership agreed to reinterpret the UN charter so that threats to international peace and security against which the security council can take action included humanitarian disasters within states where the governments concerned had failed in their responsibility to protect their own people.

Of course, with the bleating from Belgrade about "sovereignty", the repression in Tibet or the continuing disaster in Darfur, not to mention events in Palestine, a cynical and superficially appropriate response would be "Big deal! So what?"

Certainly there has been a loss of momentum behind the idea, not least as the non-aligned and African states that Annan recruited to the concept have stepped back in the face of western double standards. Now that a rested and recuperated Annan is back on the world stage, allied with Nelson Mandela, an equally respected world figure, he can return to advance the work he started.

It will not be quick. It has taken several thousand years for the precept "thou shalt not kill" to gain acceptance, and the R2P may take some more. However there are signs. Already, in Sudan for example, China cannot preach absolute sovereignty to excuse Khartoum, so it has come under heavy pressure for its abuse of its veto.

One could only wish that the US would come under equal pressure for its use of its veto in the Middle East. It would do a lot to disarm the critics of R2P. Even there, some progress has been made. After a honeymoon period, Ban's UN has now remembered that Israel's settlements are illegal and that Israel promised to stop expanding them under the "road map". Pointing out the obvious may not seem revolutionary, but small things like this are big steps toward the idea that international law applies to everyone, not just those of whom Washington disapproves.


IAN WILLIAMS is a Columnist for MaximsNews Network. This article was first published in The Guardian.