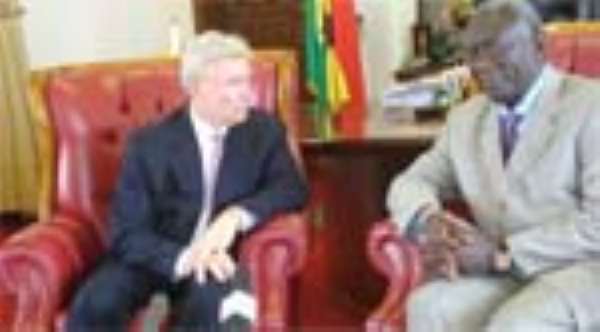 THE LONG search for a solution to Ghana's energy crisis will soon be over as the Osagyefo Power Barge is ready to take off in the next few weeks.

The country's electrical power is currently generated by the Akosombo and Kpong Hydro-electric Power Plants as well as the Aboadze Power Plant and a few others, but this is inadequate, hence the idea of the Osagyefo Power Barge.

The barge, which is expected to generate 185 megawatts of power, is a dual fired unit which can operate on diesel as well as natural gas.

It was conceived as an integrated project to accelerate the development of the Tano Fields, and was commissioned in June 1999.

A delegation from the Balkan Energy Company LLC, a US-based Energy Company which partnered the government of Ghana to operationalise the Osagyefo power barge, was at the Castle yesterday to brief President John Agyekum Kufuor on the progress of work on the barge.

Chief Executive Office of Balkan, Philip David Elders said his company has made impressive headway on the project since the past six months that it took over, and promised to make the facility operational within the shortest possible time.

He said Balkan Energy is committed to the project because it believes that when it becomes fully operational, the barge would be of benefit to both the company and the country.

He assured the President that in the next few weeks the first phase of the project would be completed, followed by the second phase that is expected to generate 65 megawatts, then a third phase to be located within the same area that would increase the power to 600 megawatts.

He explained that when the “barge was first built, it was of good quality, but because of its long sitting, it now requires a lot of work,” and added that the company encountered some problems at the initial stages “but we have overcome them now.

“We are starting two major generators and we hope to supply power to Ghanaians soon.”

President Kufuor, after hearing the good news, related how the barge was built in Italy with a loan from the Japanese government “and it stood in Italian waters for a long time. But when we took over power we thought that was a lock up of capital and so we brought it home.”

After the President and members of the delegation including Gene Philips, Chairman of Balkan Energy; D.W. Mitchell, Director; and Kwesi Amo, consultant of the company have held a closed door meeting, Mr. Amo disclosed in an interview that the project would now rely on natural gas from Tullow and Cosmos Energy, the two companies which discovered oil in the country.

The Osagyefo power barge was brought to Ghana to avoid further payment of demurrage on the barge in La Sperzia, Italy. It moored at the Naval Base in Sekondi on October 13, 2002. When access channel to the pond at Effasu was completed, the barge was subsequently moved to its permanent site at Effasu-Mangyea on March 7, 2005 and has since been moored and clamped.

The barge has never been operated, due to non-availability of fuel to run it, as the Tano Fields, originally projected as source of fuel supply for the barge, is yet to be developed and plans to use alternative sources have fallen through.

Balkan Energy entered into a 20-year agreement with the government of Ghana to run the barge.

Under the agreement, the company is expected to equip, refurbish and commission the barge and its associated facilities within ninety (90) working days after the effective date of the contract at a cost of about $40 million.

Balkan Energy is also expected to convert the barge into a combined cycle power plant with an incremental capacity of 60MW within 9 months after the effective date of the agreement at a cost of about $100 million.

The company would also pay the government of Ghana a yearly lease of $10 million from the beginning of the 6th year to the 12th year. The agreement shall be reviewed every five years.