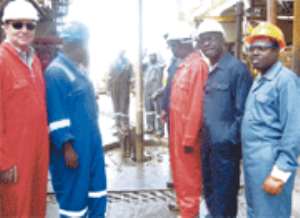 The first sample of oil in Ghana has trickled out of a projected 600 million-barrel deposit off Cape Three Points in the Western Region.

After a 20-year search for the reserves in Ghana, the light oil was finally reached 3,425.8 metres in the “Mahogany” Well and presented in its raw form to a thrilled President J. A. Kufuor at the Castle yesterday.

The discovery is said to be high quality light crude oil which is very expensive on the international market.

However, it will take between three and five years for the oil to be produced in commercial quantities.

The discovery was made by Kosmos Energy of the United States of America (USA), in partnership with Anadarko, Tullow Ghana Ltd, the Ghana National Petroleum Company (GNPC) and others.

Chairman and Chief Executive Officer of Kosmos Energy, Mr Jim Musselman, who led the delegation to the Castle, broke the news to President Kufuor and said he was optimistic about the finding but asked the public to be patient with the company, since there was more work ahead.

He then presented a sample of the oil in its raw state to President Kufuor as evidence of the discovery.

In July 2004, the government signed the agreement for oil exploration with Kosmos Energy of the USA, the GNPC and the E.O. Group of Companies.

The agreement, which was reached within a record time of three months, was based on previous seismic data provided by the GNPC and valued at an initial $30 million.

Although the company began operations in 2004, the actual drilling of the well by the “Belford Dolphin”, a dynamically positioned fifth-generation deep water drill ship with 126 workers on board, including 16 Ghanaians, started on May 28, 2007.

To ascertain the veracity of the news when it started trickling in, the Minister of Energy, Mr Kofi Adda, some board members of the GNPC and senior directors of the Ministry of Energy, including the Director of Petroleum of the ministry, Dr Appiagyei Gyamfi, and the Country Manager of Kosmos Energy, Nana Yaw Owusu, last Sunday visited the rig, whose operations cost $700,000 a day.

Mr Musselman told the President, “We are pleased that the first well in our multi-well West African exploration drilling programme is a success.”

The Executive Vice-President of Kosmos Energy, Mr Brian Maxted, said the management of the company was upbeat about the prospects of the discovery and indicated its readiness to sink more wells to pave way for the commercial extraction of the oil.

Commenting on the breaking news, President Kufuor expressed gratitude to God that such a discovery had been made during his presidency and particularly at the time when the country was facing an energy crisis.

He congratulated the management of Kosmos Energy on the company's achievement and said it was significant that the first drill by the company struck oil.

He said on assuming office in 2001 and realising the key role of the GNPC, he reconstituted the board of the corporation and charged it to focus on its core business, instead of spreading its tentacles to cover many activities, including farming.

The Daily Graphic reporter observed the operations of the drillers and the various activities being carried out on the heavy duty rig.

Space had been provided for the landing and effective take off of one helicopter at a time. The tip of the driller which fetched the oil had been preserved as part of history and every worker on board seemed visibly elated by what they described as a significant achievement and the result of hard work.

The group runs shift because the operations on the rig are on a 24-hour basis.