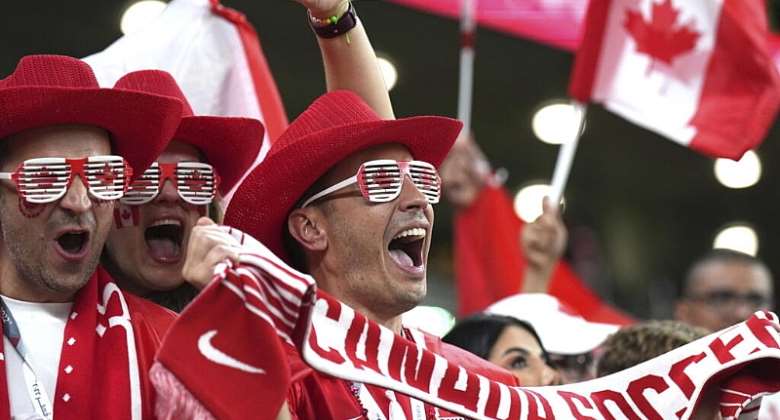 Gallant in defeat to Belgium, overpowered by vengeful Croatians and then swashbuckled aside on Thursday night, the vicissitudes of Canada's first World Cup campaign for 36 years are likely to provide the template for a generation of players and coaches.

John Herdman's side went down 2-1 to Morocco at the Al Thumama Stadium in a pulsating contest.

And in the defeat, perhaps the phoenix. Morocco showed the Canadians how adventure could soar on the international stage.

Walid Regragui's side exuded the dash and dazzle Herdman craves from his charges. They also unfurled a cutting edge.

A blade sorely lacking from Canada's front line to the chagrin of supporter Jeff Hovell who had flown from Halifax, Nova Scotia, with his wife, Narda, to follow the team.

“We beat Mexico and the United States in the qualifying campaign," said the 59-year-old retired engineer.

"But the performances here have not been up to those standards.”

“But the experience will be good for them," added Narda. "It will help. We've been good in the first 20 minutes but we have to keep that going."

Pleasure
Before the opener against Belgium, Herdman urged his players to enjoy the chance of participating at a World Cup and ensure the fans travelling to support them as well as those watching from abroad would take pride at their efforts.

“That's certainly been the case for me," said 64-year-old retired IT consultant Gino Carlesimo.

"I think they've played well for a first tournament.

"Although they have been eliminated I think we are leaving with a good impression.

"The last time we played in the World Cup it was awful."

Campaign
In 1986 in Mexico, Canada conceded five goals and failed to hit the back of the net in their three matches in the group stages.

In Qatar, the rearguard was breached seven times. But two goals were scored.

Alphonso Davies will be able to dine out for a lifetime as the first Canadian man to find the target at a World Cup tournament after his goal against Croatia in the 4-1 defeat at the Khalifa International Stadium on 27 November.

The second goal came in the 2-1 to Morocco from the outstretched boot of Morocco defender Nayef Aguerd who may well be greeted like a lost son when he next travels to Canada.

"Football is probably the fourth most popular sport after ice hockey, basketball and American football,” added Carlesimo, a retired IT consultant.

“In ice hockey we expect to win,"
Experience
While Herdman's acumen was picked apart on the playing fields, his off-field demeanour came under scrutiny too.

Croatia went into their clash with Canada fired up after Herdman's comments from a huddle after the Belgium game were construed as insulting to the country.

The 47-year-old Englishman accepted he had been too emotional in the heat of the defeat.

And promised to be measured, though he insisted Canada had to exploit such fighting talk to operate effectively on the more demanding international plain.

Future
A voyage back to Montreal awaits him following Canada's exit.

Halfax native Elizabeth MacGillivray will stay in Doha, however, after watching her comaptriots in order to continue her job in healthcare

"It's been a once in a lifetime experience," she said. "Hearing the national anthem, watching the team and seeing Canada's men score their first goal at a World Cup ... it's been phenomenal.”

As one of the co-hosts for the 2026 tournament, Herdman, if he stays in his post, will have to ensure the team remains competitive over the next four years.

Qatar, after spending 200 billion euros on preparing for the first World Cup in the Middle East, left the tournament with the ignominy of becoming only the second host nation after South Africa in 2010 to be eliminated after the group stages.

Pressure building then for Canada not only to glitter but also to avoid that particular fate.