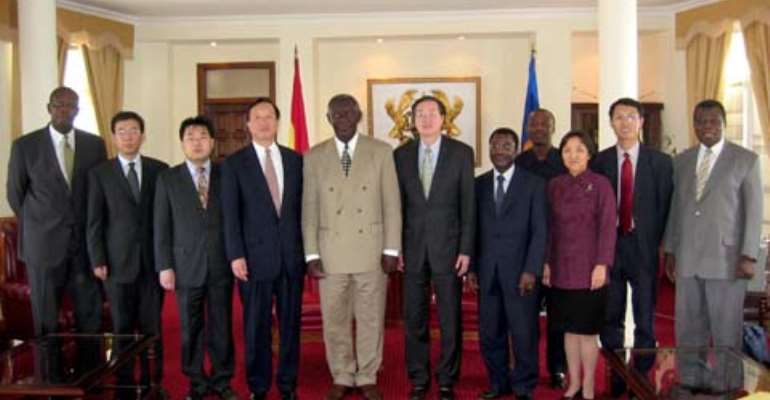 About 600 million dollars is needed for the construction of the Dam, which had been on the drawing board, since the 1960's. It would generate about 400 megawatts of electricity.


The Chinese initially offered a 50 per cent concessionary loan towards the Project, but Ghana, pushed for 70 per cent.


Speaking during bilateral talks with President John Agyekum Kufuor at the Beijing Great Hall on Friday, Mr Hu said his government would support Chinese Companies involved in negotiations for the project to secure the needed funding.


A six-member team has already been constituted by the Chinese to work with their Ghanaian counterparts on the financial and technical details of the deal.


President Kufuor, who is in the Chinese Capital to participate in the China-Africa Heads of State Summit, which would define investment and trade relations between China and Africa in the coming years, had earlier on Thursday met with a delegation of the Sino Hydro Corporation, the Chinese contractors likely to undertake the project.


He was scheduled to hold another meeting with the Exim Bank of China on the financing, later on Friday afternoon.


President Hu informed President Kufuor of plans to broaden the scope of Ghanaian export commodities that enjoy zero tariffs to balance the trade between the two countries.


Trade between Ghana and China last year stood at 769 million dollars and this was skewed towards the Chinese.


Additionally, China is also to increase the number of its educational scholarship to Ghanaians.


He said he was happy with the relations that existed between the two countries and that they would work to enhance the political and mutual trust.


President Hu recalled his meeting with President Kufuor on the sidelines of the Afro-Asian Summit in Jakarta in April last year, where they exchanged views on bilateral issues and matters of common concern and said he was happy to see him back in China for the China-Africa Summit.


President Kufuor said Ghana was serious in its desire to deepen its relations with China.


He extended an invitation to President Hu to attend the Golden Jubilee celebration of Ghana's Independence, next year.


President Kufuor at his meeting with the Sino Hydro Corporation delegation led by its Group President, Mr Fan Jixiang, said the Bui Project was uppermost in his heart and that he would want to see the project take off without delay.


He said Ghana would be happy to partner the Corporation, which is the biggest hydro electric construction firm in China, in its implementation, adding that the critical importance of hydro energy for socio-economic development could not be underestimated.


Mr Fan said the Project should be a "win-win" in terms of its technical operations and financing.