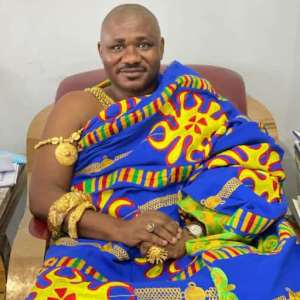 The chief of Barekese, the capital of the Atwima Nwabiagya North District of the Ashanti Region, Nana Amoapem Brenya I has said when the people of Barekese rally behind him in peace and unity they would leave a good legacy for the next generation.

Addressing a section of the residents at the Barekese palace on Sunday, November 13, 2022 to climax the Akwasidae event, the chief observed that unity brings peace and development..

Nana Amoapem Brenya I explained that during the reign of his ancestral chiefs they lived with the people in unity and that attitudes helped maintained peace and order until this present generation.

The chief cited for instance that the last chief of Barekese who passed on, Nana Akowuah ruled the town for fifty-eight solid years without any conflicts at Barekese.

He told his people that the legacy which Barekese is now enjoying was the unity and peace that existed all these years.

When asked about the reason why in this era some alleged faceless citizens have decided to thwart the archievements that their forefathers chalked for the town, he stated, "We are in a democratic dispensation and we need to share ideas in unity towards development but not through violent means that could stall the progress of Barekese."

Nana Brenya I reminded the townsfolk to understand that the Ancient Greeks brought democracy to build their economies through positive thinking and a sense of direction. "Which means that opinion sharing must be free, fair and constructive devoid of violence or hatred to achieve positive results."

He added that it is such principles that led to the success story of the Greeks, thus compelling the world to adopt democratic practices to build their economies today.

Barekesehene was of the opinion that the residents would take advantage of the Akwasidae event and advise each other to promote peace and unity at Barekese to help build the town for the sake of the future generation.