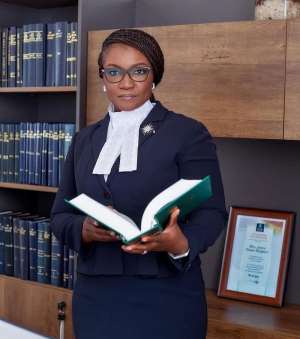 The name Joyce Bawah Mogbori, sparks different rays of personalities to different people from different backgrounds. To those in the Maritime industry, she’s an experienced and an all-round solicitor, who can mediate in maritime transport cases both locally and internationally. To the Ghana Shippers’ Council, she was the best Solicitor Secretary the council ever had. To her colleagues who were called to the Bar in 2000, she’s a fearless Barrister. To her political compatriots, she’s the aide to Former President Mahama, a versatile and effective communicator; but to us in Gonjaland, she’s our “Wandiga”, our “Lanka” and our Sungbunwurche in future if the crown falls on her head and she decides to wear it.

Since the seat of the Gonja Kingdom was moved to Damongo, Yagbonwura Bawah Doshie was the second to have come from the Kpembe gate. Having waited for 16 years on the throne of Kpembe, the son of Ayishetu Naa Iddisah Dasana, ascended Yagbon in 1999, a year before his granddaughter, Joyce Bawah Mogtari Esq. was called to the Bar. He ruled the Gonja Kingdom for 11 years and passed to glory in his 110th year, 2010.

So, when you see Joyce Bawah Mogtari Esq. speak that impeccable English on TV or on other platforms without blinking, be reminded that, she equally dances with two tails of a horse when Royals from the Gonja Kingdom are called. She’s a royal without scars; a royal with untainted appellation; she’s indeed a royal from a powerful gate in the Kpembe Tradtional Area (ie Singbun).

If a child of this 21st Century came from such a background and with such support systems, she may just ride high above everyone else with an unusual pride. Yes, a granddaughter of a Singbunwura who was only warming up to take the throne of Kpembe in 1983 should be proud and walk with her chest out. A daughter of a regional minister during the early years of the 4th Republic could have decided not to roll her sleeves, to get stressed in the lecture rooms of the International Maritime Institute in Malta, in order to win the best student award. She could just decide to call for services from the palace maids or from the political aides. After all, why stress when the next meal was a call away.

Either of “Wandiga” or “Lanka, is her appellation. So, Joyce Bawah Mogtari is not just one of the beautiful women you find keeping herself in a gym, or a smiley Fellow of the USA—International Visitor Leadership Program, or a versatile expert for the admiralty court, or a cheerful philanthropist, she’s “Singbunwurche” in waiting; a queen mother who has a reserved seat in any palace in the Gonja Kingdom.

Before the Barrister’s wig could fit her head in the year 2000, a royal crown was already in its rightful place. Before Wesley Girls Secondary could claim her as an old student, her identity was already carved from the almighty Kpembe. A great granddaughter of Kpembewura Abudu Lonyor, a granddaughter of Yagbonwura Bawah Doshie, a great great granddaughter of Bimbilawura Naa Iddisah Dasana, Joyce Bawah Mogtari will always throw two tails of a lion while dancing, to signify royalty from all angles.

When next you see Joyce Bawah Mogtari in her Barrister’s wig, just know that there is an invincible crown on her head on which the wig rests. Whenever you see her in her simple track suits on the hills of Aburi on weekends, see not only the track suits, but be reminded that she’s in an invincible royal regalia. When next you watch her speak with humility, don’t take that to mean the voice of a weak commoner, she’s a royal who could roar, but for her personality and her upbringing.